Victory - From Ashes To Glory Review 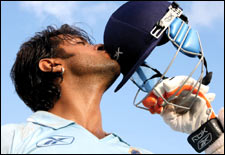 Samrat Sharma / fullhyd.com
EDITOR RATING
4.0
Performances
Script
Music/Soundtrack
Visuals
5.5
1.5
7.0
7.5
Suggestions
Can watch again
No
Good for kids
No
Good for dates
No
Wait to rent it
Yes
It's official then - not all ad film guys turned directors know what they are doing. Unlike the bold nouveau filmmaking bravado displayed by Dibakar Banerjee late last year, Victory is as flat, full of clichÃ©, and blandly made as any 'safe' film from Bollywood. Cricket doesn't make it edgy; on the contrary there are moments where cricket regresses to more well-trod ground than any other part of the film.

Ajit Pal Mangat sure does know how to direct a camera, because the cinematography by Vikas Sivaraman is often inspired, while still playing it safe. What Mangat lacks is a sense of pacing, an understanding of restraint, and above all the most basic of all filmmaking traits for Bolly roots - heart.

Don't get mislaid by the emotional TV promos blaring from every channel at every 30 seconds. Each shot, each scene is constructed carefully keeping in mind the business of the film. Mangat aims to please all, and does not shy away from shamefully maudlin and manipulative moments to tug at all the right strings.

Even so, this is not as much ball-tampering as it is repeated fake appeals, as the film has the same basic momentum of any masala Bollywood film, and play without any surprises, and sadly, without any interesting moments. Mangat knows how to create tension - which would be evident in the finale that he constructs, but the rest of the film lacks this sure-footedness.

The film opens with the adage that cricket in India is not a sport, it's a passion, an obsession. The film then goes on to create the exact opposite of this sentiment. There is no passion, no obsession, not even a general enthusiasm at display here. In treating cricket the same way you would treat a beaten comedy track in a bad film, Mangat has done a disservice to the sport, and by extension his film.

The sport, the story, the characters - nothing is treated with love and affection, but manipulated, used, as tools to create a commercial enterprise. Need to create a nationalistic moment? Throw in our hero with the Tricolour. Need to create tension? Show the parents holding their breath. It is exactly that mechanical and mundane a film, and it serves no purpose than to safely launch Harman Baweja back into orbit.

It's not Harman (I don't recall, but I think he has changed his name's spelling immediately after the first disaster to something ridiculous) that's at fault here, though. He's not awesome, but he is hardly the eyesore he was in 2050. He plays a measured innings with confidence, and while bringing nothing new to the table, at least tries to do a serviceable job of getting singles. The problem is, there is no one to rotate the strike with.

The rest of the cast is appallingly bad. Amrita Rao plays a stock character that needs to die a slow cinematic death. Anupam Kher is seen at odd moments of the film, bits of scenery still clung to his chin. Gulshan Grover and Tinu Anand have been sapped of all originality at this point, and all they can do is be the caricatures they have been playing for the past million years. They do that well here too.

No, the worst bit is the fan service - the Lords of cricket cameos. First of all, I think I am joined by all when I express this sentiment: the likes of Ramesh Powar and Atul Wassan can hardly be called a coup. With Brett Lee and Bhajji headlining the cricketing cast, it's not exactly bottom of the barrel, but the Lords are missing. Understandably so, because no self-respecting legend would want to be treated the way cameos are treated here. Either you are dirt, scum, lower than low who must be annihilated under the baton that is the balla of Vijay Shekhawat (that's Baweja), or you are a huge fan, ready to kiss his L guard straps.

With shallow characters, bad acting, terrible pacing and a very filmi over-the-top tone, the movie's climax couldn't have worked. But it does. The only thing in the film that works is the finale, staged and mounted for maximum tear-jerking effect. Pity the rest of the film does not measure up to it. Mangat is absolutely right, by the way. Cricket generates fervor unlike any other sport in this country. What he forgot to do was pay heed to his own understanding.

When you understand the spirit of a game, and understate it with the human stakes, you can create cinematic magic. Lagaan, as flawed as it was, had the power to turn cinema halls into stadiums. Iqbal on the other hand made you grin from ear to ear without resorting to jingoism. Victory makes you roll your eyes and look at it cynically. Hardly the effect the makers had in mind.

There are better films, and there is better cricket. But if you happen to have no television, and need some of that cricket itch scratched, do by all means give a dekko, and as you see the rise and fall and rise of a young sports star, remember that lack of depth is exactly what keeps you from being a fan of other sports.
Share. Save. Connect.
Tweet
VICTORY - FROM ASHES... SNAPSHOT
VICTORY - FROM ASHES TO GLORY SNAPSHOT

ADVERTISEMENT
This page was tagged for
Victory - From Ashes To Glory hindi movie
Victory - From Ashes To Glory reviews
release date
Harman Baweja, Amrita Rao
theatres list
Follow @fullhyderabad
Follow fullhyd.com on
About Hyderabad
The Hyderabad Community
Improve fullhyd.com
More
Our Other Local Guides
Our other sites
© Copyright 1999-2009 LRR Technologies (Hyderabad), Pvt Ltd. All rights reserved. fullhyd, fullhyderabad, Welcome To The Neighbourhood are trademarks of LRR Technologies (Hyderabad) Pvt Ltd. The textual, graphic, audio and audiovisual material in this site is protected by copyright law. You may not copy, distribute, or use this material except as necessary for your personal, non-commercial use. Any trademarks are the properties of their respective owners. More on Hyderabad, India. Jobs in Hyderabad.