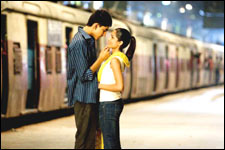 Deepa Garimella / fullhyd.com
EDITOR RATING
9.0
Performances
Script
Music/Soundtrack
Visuals
10.0
9.0
10.0
9.0
Suggestions
Can watch again
Yes
Good for kids
No
Good for dates
Yes
Wait to rent it
No
There are people who live in the very filth that the rest of the world averts its eyes and noses from. Kids who watch other kids being blinded and sent to beg for money. Revolver-wielding teens who only have vague memories of the touch of a mother's hand. Big-shot game-show hosts who jeer at you if you told them you were a chai-wallah and you hoped to win the show.

But Jamal (Dev Patel), a child of this hell-hole that many are forced to call 'life', loves as though love was what he was always fed on. Destiny likes him for sure.

The a young man from Mumbai's slums, who has been through more muck than many of his age can imagine, and who serves tea at a call-centre now, is just a question away from winning the largest ever prize in the history of Indian television.

He's been handed over to the police (Irrfan Khan and Saurabh Shukla), and the film opens with them dunking his head in water, passing electricity through his bare soles, and doling out generous numbers of the MC word, to find out if he's been cheating on the show, because a slumdog cannot possibly know all the answers, nor can he be so tremendously lucky.

As he and the police watch the day-old recorded episode that Jamal made history in, Jamal explains his answers - each question that the host (Anil Kapoor) threw at him, had burst open a volcano of disturbing images, and emotions in his head. Punctuated by these questions, a gritty account of his background follows, a life spent in the company of his elder brother, Salim, and a life spent wondering where they took Latika (Freida Pinto), his sweetheart, to.

Love was what led him onto the hot-seat of 'Who Wants To Be A Millionaire', where Jamal couldn't help but know all the answers. But tea-boys and slumdogs always lie and they are always after money, no?

Slumdog is a winner, not because the entire nation will anyway watch an Oscar nomination based on an Indian setting, or because people are wondering what picture a Western creator has painted of India, or because A R Rahman has already won one international award for his music and is on the way to the biggest of them all, or because the pirated discs were out long ago. All right, it is.

We'd just like to add that with doses of wit, hope, intense but down-played emotion, and the promise of something to look forward to beyond the brutal baddies and dirty slums, Slumdog is a fast-paced, reflective, touching, feel-good entertainer. Some beautiful scenes pop out now and then - like the one where the blind Arvind recognizes Jamal by voice and touch, or Jamal's final moments on the game show.

Rahman's soundtrack is powerful and does more than just stay on the periphery of every scene â€" it makes up most of the reason you feel every emotion that is playing out in front of you. The visuals have a candid camera feel to them, and are 'arty' grimy throughout.

The first half has a few scenes that are hard-hitting or nauseating, depending on what feelings a cesspit rakes up in you â€" the much talked about cesspit scene is shown within minutes of the beginning, and there's a scene in which a street child is blinded â€" scenes which will make you cringe, all the more because they are part of a film made by Westerners, and also because these could be the scenes that probably struck Western audiences as 'the centre of the centre of the world', as Salim puts it.

The characters of Jamal, Salim and Latika are played in 3 stages â€" childhood, teenage and the present â€" that are divided almost equally in the plot. This is Jamal's story, so the weight tilts in his favour, but his hardened brother, who goes the gangster way, has an in-depth character sketch too. Dev Patel, as the nervous, guileless Jamal unwittingly thrust in the lap of wealth in front of the whole nation, does an equaly brilliant job as the exasperated guy who knows nothing but the truth, but who the police just refuse to believe.

Anil Kapoor plays the TV host who has a slightly chilling edge, and his isn't really a performance-oriented role. Saurabh Shukla and Irrfan Khan provide some of the humour.

Of course, Slumdog Millionaire isn't to be missed, but the experience of watching it in a movie hall surely beats that of watching it any other way, and is more lawful too.
Share. Save. Connect.
Tweet
SLUMDOG MILLIONAIRE SNAPSHOT

See Slumdog Millionaire full details
SLUMDOG MILLIONAIRE USER REVIEWS
1 - 3 OF 3 COMMENTS
POSITIVE  |  NEGATIVE |  NEWEST  |  OLDEST  |  MOST HELPFUL  |  LEAST HELPFUL
USER RATING
9.0
3 USERS
Performances
Script
Music/Soundtrack
Visuals
9.0
9.3
9.0
9.3
Can watch again - Yes
Good for kids - No
Good for dates - No
Wait to rent it - No
Krishna on 2nd Feb 2009, 9:23am | Permalink
Some disturbing scenes apart, this one is worth watching. No use debating about it.

ADVERTISEMENT
This page was tagged for
Slumdog Millionaire english movie
Slumdog Millionaire reviews
release date
Dev Patel, Freida Pinto
theatres list
Follow @fullhyderabad
Follow fullhyd.com on
About Hyderabad
The Hyderabad Community
Improve fullhyd.com
More
Our Other Local Guides
Our other sites
© Copyright 1999-2009 LRR Technologies (Hyderabad), Pvt Ltd. All rights reserved. fullhyd, fullhyderabad, Welcome To The Neighbourhood are trademarks of LRR Technologies (Hyderabad) Pvt Ltd. The textual, graphic, audio and audiovisual material in this site is protected by copyright law. You may not copy, distribute, or use this material except as necessary for your personal, non-commercial use. Any trademarks are the properties of their respective owners. More on Hyderabad, India. Jobs in Hyderabad.