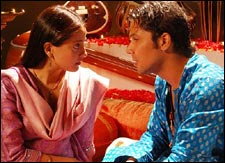 Deepa Garimella / fullhyd.com
EDITOR RATING
2.5
Performances
Script
Music/Soundtrack
Visuals
3.0
3.0
2.0
4.0
Suggestions
Can watch again
No
Good for kids
No
Good for dates
No
Wait for OTT
No
Maya (Raima Sen) is a lonely housewife and mother, whose passion for singing has been killed by marriage. But then, she and her husband Vikram (Arbaaz Khan) are the kinds who can kill Amitabh Bachchan's passion for acting. Moreoever, Vikram is cold, chauvinistic and rude, and is sleeping with another woman.

Now, an elderly couple lives right across the street from Maya's house. This couple wants to let out a room that's been lying empty upstairs, but they are not able to find the right occupant - they want the person to be sensitive, full of life, and artistic. Maya tries to find a metaphor there for her life, but she's the kind who thinks that a metaphor is a new line of woollen clothing. This causes her to have visions of an imaginary fur-clad guy called Jai (Randeep Hooda).

Jai is strictly a fantasy, and moreover, Maya has a strictly platonic relationship with her fantasy. This explains why Jai never goes beyond kissing her cheeks. He mainly serves as an inner voice that prods her on to chase her dream of becoming a singer.

Maya starts feeling less lonely, but as she sets out to do something about her dream (of singing, not of Jai), she discovers her lack of confidence. Heck, if my inner voice kept appearing in fancy dress costumes, blowing tuneless horrors into a flute and mouthing dopey lines from a 4th standard essay-writing assignment, I would feel lonely, under-confident and ashamed.

Now Maya has a bunch of stuck-up 20-somethings as neighbours who keep doing and saying all those cool things that aspiring rock bands in movies seem to do and say, of which none comes to mind right now. A major music contest is coming up, and Maya wants to be lead singer of their band, but they refuse to take her.

Maya enters with the help of an agent who cheats her, and she's a disaster at the auditions. But her neighours are also desperate for a lead singer now, so they decide to come together. Meanwhile, Vikram isn't too happy at his wife's sudden interest in a career, or in her young, dynamic, dashing neighbours. This also gives him the opportunity to show off his brand new expression - but without moving a muscle. Try scowling without moving a muscle, it's very tough.

The rest of the story is about how Maya, with the help of her fantasy-man, goes on to become a singing sensation, and an independent, strong woman; and her band makes it big on the music scene - overcoming little details like dialogues, screenplay, music direction, and the audience.

Mere Khwabon... is such an unbelievably drab, emotionless flick that you keep waiting for Randeep Hooda to appear on screen so that you can feel some emotion - for his boots! Raima Sen has highly expressive eyes that decided to go to sleep even before the director could say 'Action!' The rock-band wannabes are among the better performers in this film.

ADVERTISEMENT
This page was tagged for
Mere Khwabon Mein Jo Aaye hindi movie
Mere Khwabon Mein Jo Aaye reviews
release date
Raima Sen, Randeep Hooda
theatres list
Follow @fullhyderabad
Follow fullhyd.com on
About Hyderabad
The Hyderabad Community
Improve fullhyd.com
More
Our Other Local Guides
Our other sites
© Copyright 1999-2009 LRR Technologies (Hyderabad), Pvt Ltd. All rights reserved. fullhyd, fullhyderabad, Welcome To The Neighbourhood are trademarks of LRR Technologies (Hyderabad) Pvt Ltd. The textual, graphic, audio and audiovisual material in this site is protected by copyright law. You may not copy, distribute, or use this material except as necessary for your personal, non-commercial use. Any trademarks are the properties of their respective owners. More on Hyderabad, India. Jobs in Hyderabad.