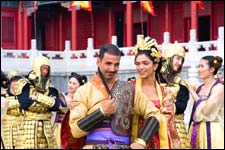 Deepa Garimella / fullhyd.com
EDITOR RATING
6.0
Performances
Script
Music/Soundtrack
Visuals
8.0
4.0
8.0
7.0
Suggestions
Can watch again
No
Good for kids
No
Good for dates
Yes
Wait to rent it
No
A simple-minded small-town potbellied bloke who cooks at a diner run by his guardian, dreams of a bigger life, and becomes an unlikely hero of a village, also finding himself a brilliant teacher who teaches him an ancient Oriental martial art. That is how Kung Fu Panda stole a zillion hearts. And that is what Akshay Kumar did for homework.

Because, Akshay Kumar's biography, this is not. Somewhere in China, some oppressed villagers are hunting for the reincarnation of an ancient hero, Liu Sheng, in order to finish off the horrible diamond smuggler Hojo. And guess what, the reincarnation is in Chandni Chowk - Sidhu (Akshay Kumar) is helping his friend, philospher, guide, mother, father, and dada (all epitomized by Mithun Chakraborty) at an eatery there.

Sidhu's fervent prayers for a windfall are constantly taken advantage of by a half-Chinese-half-Indian mystic, Chopstick (Ranvir Shorey). When the Chinese come calling, translator Chopstick tells Sidhu only half the truth, and Sidhu, convinced that this is his ticket to prosperity, gleefully travels to China with Chopstick in tow, and enjoys the adulation, oblivious to the entity called Hojo.

The rest of the story is about how Sidhu, after getting beaten to pulp by Hojo, trains in martial arts, in order to confront him. Deepika Padukone plays both Ms TSM, the Indian model who comes to China to pay a tribute to her father and her twin who she presumes dead; and Meow-Meow, that very twin, who works for Hojo.

CCTC doesn't take itself very seriously, and could have been a rollicking entertainer. However, it uses action as an end in itself. The 'believe in yourself' message, and the fun in the filmi-clichÃ© spoofs, get lost in all that noisy chopping and stabbing. Thankfully, whenever Akshay Kumar speaks (which we expected more of), he says something hilarious, else it would have been tedious to watch a slow, predictable story interspersed with some gore and implausible stunts that don't seem all that exciting anyway.

At first, there are things like Mithun kicking Sidhu and sending him flying across town, and gravity getting suspended only till Sidhu realizes where he is. Very soon, when the scene moves to China, it improves from those Tom & Jerry antics, but then there are baddies with weirdly white-washed faces, umbrellas that glide better than parachutes when falling from top of multi-storeyed buildings, villains somersaulting all over the place, weapons going right through people, and flying hats decapitating men. All right, we'll be fair. Sidhu's training session and the action after that will impress you, but only if you haven't done Akshay's homework.

One scene makes all the violence seem classy. The one where the villain pees on Sidhu's face. When have you seen that one in mainstream Bollywood?

Akshay Kumar is great with the jokes, as usual, and is the sole reason why the film entertains. Ranvir Shorey also has amusing scenes, but not throughout. Pretty much an occasional pretty fixture in the surroundings, Deepika has a few stunts, a bit of expression-changing, and little to say.

Chak Lein De and Naam Hai Sidhu are wonderful songs to listen to, and entertaining to watch, played as they are during Sidhu's antics. The visuals are regular Bollywood slick, and range from dusty Chinese village outdoors, to red Chinese indoors, to a little bit of grimy Chandni Chowk, and some tacky aerial tricks.

As a form of entertainment, CCTC is fine, but as a piece of inspirational genius, it isn't. And as for the buzz about how this is inspired by Akshay Kumar's life, well, anyone with half a brain would figure out the truth, 5 seconds into the movie. We took 10, though.
Share. Save. Connect.
Tweet
CHANDNI CHOWK TO CHINA SNAPSHOT

See Chandni Chowk To China full details
CHANDNI CHOWK TO CHINA USER REVIEWS
1 - 1 OF 1 COMMENTS
POSITIVE  |  NEGATIVE |  NEWEST  |  OLDEST  |  MOST HELPFUL  |  LEAST HELPFUL
USER RATING
2.0
3 USERS
Performances
Script
Music/Soundtrack
Visuals
3.0
2.3
3.0
3.0
Can watch again - No
Good for kids - No
Good for dates - No
Wait to rent it - Unsure
rekha on 16th Jan 2009, 9:48pm | Permalink
advice to the viewers; leave your logic, reasoning and common sense at home, before u venture for this movie.

ADVERTISEMENT
This page was tagged for
chandni chowk to china hindi
Chandni Chowk To China hindi movie
Chandni Chowk To China reviews
release date
Akshay Kumar, Deepika Padukone
Follow @fullhyderabad
Follow fullhyd.com on
About Hyderabad
The Hyderabad Community
Improve fullhyd.com
More
Our Other Local Guides
Our other sites
© Copyright 1999-2009 LRR Technologies (Hyderabad), Pvt Ltd. All rights reserved. fullhyd, fullhyderabad, Welcome To The Neighbourhood are trademarks of LRR Technologies (Hyderabad) Pvt Ltd. The textual, graphic, audio and audiovisual material in this site is protected by copyright law. You may not copy, distribute, or use this material except as necessary for your personal, non-commercial use. Any trademarks are the properties of their respective owners. More on Hyderabad, India. Jobs in Hyderabad.