Underworld - Rise Of The Lycans Review 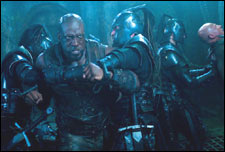 Samrat Sharma / fullhyd.com
EDITOR RATING
5.5
Performances
Script
Music/Soundtrack
Visuals
7.5
4.5
4.0
7.0
Suggestions
Can watch again
No
Good for kids
No
Good for dates
Yes
Wait for OTT
Yes
Underworld: Rise of the Lycans, the third movie in the convoluted and highly high-concept vampires versus werewolves franchise, managed to surprise me a little. It's hard you see, surprising me with such a film when the film is basically the retelling of the 10-minute flashback story from the first film. It's especially hard when they hire the second rung - the lesser known British stars and a director who is better known for the special effects direction he has provided to films - and go ahead and shoot the film is what seem to be leftover sets from the first film and the second film's climax.

Just so you know, though, the surprise is not that Kate Beckinsale is not in the film for more than half a second as a re-tread of her iconic standing on top of a tower shot. Nope, the surprise really is this - it's not bad.

Don't get over-excited yet - it's far from good, but despite the low production values and the overall lack of interest in cinematic enterprise, director Patrick Tatopoulos and writer Danny McBride have managed to make a half-decent action-adventure film.

It helps that Martin Sheen, reprising his role as Lucian, has been going from strength to strength in recent roles, and Bill Nighy, even when masticating scenery like a pregnant cow, has been more than entertaining. Actually, he is especially entertaining when he is chewing scenery. Rhona Mitra, being hot and all, is exempt, but seriously, overall, the film entertains.

The lean story helps maintain a general sense of fun too. So the vampire big daddy Viktor (Nighy) keeps Lycans (Underworld's fancy-speak for werewolves) as slaves and workers. They've got these magic collars that keeps them from being all, well, werewolf-y. So in human form, the Lycans serve the Vampires all nice like. Except when they're getting it on with their daughters, it seems.

Viktor's daughter, Sonja (Mitra), likes to hang out with Lucian, and do some cheap special-effect versions of lakdi ki kaathi. When Lucian wants to be free, and break into freedom with his friends, daddy is not amused. When Sonja tells daddy that she loves Lucian, daddy gets real furious.

When the butt-kicking begins, and the werewolves and vampires start fighting the ages-long fight, the film shows what the legacy has taught it - some ludicrously great moments, some awesome fights, and some corny dialog interspersed with gleeful gore. This is not the Oscar release you are looking for. This is the stupid action film that you want, but were not expecting.

Sometimes the small ones surprise you the most. As self-aware as the film is, it goes out of its way to become the entertainer you deserve, eschewing all of the nonsense the previous films carried as baggage. But the surprise is because of the sea of mediocrity and confused symbolism that is the legacy of this franchise. There are still the same mistakes being made, and the basic conceit still remains laughable.

If you can overlook the uneven quality of the action and the effects, and can stand the completely ridiculous premise long enough to enjoy the low budget fun, you're in for a forgettable but fun 90 minutes. If you like your action films with a little more sense, and more colours than, oh, blue and grey, you're better off staying away from this little film with a large moon fixation.
Share. Save. Connect.
Tweet
UNDERWORLD - RISE OF... SNAPSHOT
UNDERWORLD - RISE OF THE LYCANS SNAPSHOT

ADVERTISEMENT
This page was tagged for
Underworld - Rise Of The Lycans english movie
Underworld - Rise Of The Lycans reviews
release date
Michael Sheen, Bill Nighy
theatres list
Follow @fullhyderabad
Follow fullhyd.com on
About Hyderabad
The Hyderabad Community
Improve fullhyd.com
More
Our Other Local Guides
Our other sites
© Copyright 1999-2009 LRR Technologies (Hyderabad), Pvt Ltd. All rights reserved. fullhyd, fullhyderabad, Welcome To The Neighbourhood are trademarks of LRR Technologies (Hyderabad) Pvt Ltd. The textual, graphic, audio and audiovisual material in this site is protected by copyright law. You may not copy, distribute, or use this material except as necessary for your personal, non-commercial use. Any trademarks are the properties of their respective owners. More on Hyderabad, India. Jobs in Hyderabad.