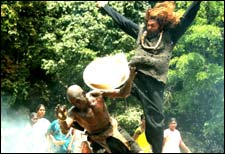 EDITOR RATING
2.0
Performances
Script
Music/Soundtrack
Visuals
9.0
2.0
9.0
9.0
Suggestions
Can watch again
No
Good for kids
No
Good for dates
No
Wait to rent it
No
Nenu Devudini makes you feel like a sprinter at the starting mark, crouched in position, all charged and pumped up, waiting for the gun to go off any second.

Director Bala gets a great concept - you can almost see peers slapping their forehead at why they didn't think of it first - and messes it up so spectacularly, you quickly realize how much you take normal Tollywood commercial directors for granted every time you criticize them for losing their grip in the climax or overdoing the sentiment, ignoring instead how they get at least the basics right.

You also have other fish to fry about Nenu Devudini. Bala spoils it for everyone else too, who will now all draw all the wrong conclusions from the failure of this one. And that would be an unfortunate by-product of Nenu Devudini, since it goes into the alleys of India that exist only in the fine-print of the country, subterranean to all those who don't belong there, and that deserve all the sunshine they can get if they really aren't to be seen.

Nenu Devudini deals primarily with the lives of beggars, giving you more data to resolve those eternal quandaries that you face everytime you see one at a signal. It also touches upon the world of Hindu sadhus, especially the Aghora sect of Shaivites. That would seem like an unlikely combination of themes for a movie, and Balu cannot make it work either, but it's pretty clear to you long before the end that that isn't for a lack of possibility at all.

The movie starts off with a brilliant panoramic profile of Kasi (Varanasi), Hinduism's holiest spot that the average Hindu of today knows far lesser about than Muslims do about Mecca, Christians about the Vatican or Sikhs about Amritsar. Stunning photography panning the thronging masses by the Ganga, and glimpses of mass cremations, of the rituals for the dead, and of practitioners of the Kapalika, Naga and Aghora cults, offer an almost-there experience. Illayaraja's haunting tunes extolling Lord Shiva provide the perfect background to get the goose-pimples all revved up, and in about 15 minutes, you are sure this is going to be a different, and rousing, ride.

The story catches up with the experience soon enough - a father has come looking for his son after 14 years. A son who he abandoned here since astrologers told him that he would bring bad luck. Searching the entire temple town, they finally land upon him - he is now an Aghora sadhu, Rudra (Arya), superhero.

It might require a complete formatting of the brain to understand the Aghora sect without judging it: they smoke ganja, eat human corpses, and roam around almost naked. Worshippers of Lord Shiva and pursuing moksha, they believe they are one with the Lord Himself (and hence the title), and are devoid of all attachments.

When his father gets Rudra's guru to direct Rudra to come home so his ailing mother gets better, Rudra complies. And introduced as you have been by then to Rudra's austere living, fierce special capabilities and intense propitiation of Lord Shiva, as also to a seriously inhuman don running a begging ring in the temple village Rudra's coming to, the stage is set for an explosively different film.

And it stays set.

For, Bala simply cannot go after getting set. The film practically stalls once Rudra reaches the village. Excelling on every other front - music, visuals, depiction of the begging ring and the bonding among the victims whose lives seem so inconsequential that you feel guilty of your own, and supremely brilliant performances by a bunch of motley actors for whom this might be the only film they'll ever do - the movie fails in just the basic aspect: telling a story. And you badly miss Puri Jagannath, Vinayak and Rajamouli.

Indeed, it's interval 45 minutes after the movie starts, and the films ends another hour later, and what happens all through is something that the aforementioned trio might have used as the intro scene for the hero. A movie that had intense potential on so many fronts - as a superhero film, as a sentimental drama, or along spiritual lines - wheezes and sputters along, and dies long before the finish line.

And if it weren't for so much brilliance in characterising the beggars and their lives of unbelievable exploitation, and making a bunch of midgets perform heart-rending stuff, Nenu Devudini wouldn't deserve such an elaborate post-mortem. Bala can chisel out great beads, he just can't string them into actual jewelry.

The performances are brilliant, especially, like we said, those of the beggars, including that of Pooja as the guileless blind one. Rudra beats her up when she tries to persuade him to be nice to his mother, but if Rudra believes he is God, he delivers on it - if you try to be good to God, it is widely rumoured that He returns the favour, and Rudra gives the young victim of destiny, the Supreme Gift.

Illayaraja's music and Arthur Wilson's camerawork (especially at Kasi) are other highlights of this ill-fated venture. This is a film dubbed from Tamil, and looks every bit of it thanks to a half-hearted effort.

Chanting Tamasoma Jyothirgamaya or the Gayatri Mantra is mostly just a politically correct thing to do - if you want your ignorance burnt, you will have to do it yourself, as all those sadhus on the banks of the Ganga at Kasi demonstrate. As always, God is in the detail - not in a mantra. Lord Shiva won't be helping Bala at the box-office with this one for forgetting that, and He's probably feeling sorry, too.
Share. Save. Connect.
Tweet
NENU DEVUDINI SNAPSHOT

See Nenu Devudini full details
NENU DEVUDINI USER REVIEWS
1 - 6 OF 6 COMMENTS
POSITIVE  |  NEGATIVE |  NEWEST  |  OLDEST  |  MOST HELPFUL  |  LEAST HELPFUL
USER RATING
5.5
2 USERS
Performances
Script
Music/Soundtrack
Visuals
8.0
8.0
8.0
8.0
Can watch again - Yes
Good for kids - No
Good for dates - No
Wait to rent it - No
ramalinga raju on 9th Feb 2009, 10:43am | Permalink
srinivas, sacheen, saradhi, kiran... this is a badly made movie. praising it just because the intentions were noble is naivete - even non-commercial movies need to have good story-telling, since a movie is basically story-telling, whether it is "art" or "commercial", embellished with other elements. the director seems to have got all those other elements right, but forgotten the story-telling bit. success comes to those who do the right things, too - not just things right.
RATING
3
Srinivas on 9th Feb 2009, 9:00am | Permalink
I am completely failed to understand the reviewer. What does he think?
Most movies are out there to entertain audiences. But some people take it for granted. Movie media is one way intelligent people use it to communicate what they want yet succeed in it. Comparing Bala to other masala movie directors is pathetic. Those directors are great in telling us unreal stories in a real way. But Bala showed us some of real world happenings that we dont know before in a real way. I agree the movie is lacking a good story telling. But that became immaterial once you see the movie. I agree you cant watch a movie like this often. But nobody has touched this subject before so deeply and one needs a great courage and persistance to take a movie like this. In every possible way we have no choice but to applaud this director. Tamil nativity could have been avoided.
Sacheen on 8th Feb 2009, 11:38pm | Permalink
Everyone, sometime or the other, experiences a moment of truth, which clearly shows what we stand for. For Fullhyderabad movie reviewers this movie is something like that, an acid test. They attempted to review an "out of box" movie, tried to fit it in one or the other regular genres made by people like Puri Jagannath, Vinayak and Rajamouli and miserably failed. I would request the reviewers to look at the movie on its own merits and try not to categorize it. This movie is in its own league and is NOT for everyone either to watch or review.

This movie tried to capture even the unimaginable and succeeds in captivating the viewers with all its varied and sometimes wierd characters (not the actors who performed. I think we people tend to associate a movie charater with the real actor to the ridiculous extent that we even vote them to a CM's position.) Without digressing further, this is not a nice movie but an engrossing one. Something which most viewers niether can digest nor vomit and will remember a long long time. This is strictly for adults who can dare to think beyond thier self imposed limits. And don't tell me I didn't warn you before :).


RATING
8
kiran on 8th Feb 2009, 1:03pm | Permalink
This is not a regular or routine masala
gregory peck on 8th Feb 2009, 11:26am | Permalink
as a director, bala has always been more of an artiste (and a brilliant one at that) than a story-teller. i didn't see this movie, but i wouldn't be surprised he messed it up.

and saradhi, didn't get you... isn't what you suggested exactly what this review is doing? and like you do, the review too says that the performances, concept and music are really very good...

saradhi on 8th Feb 2009, 8:50am | Permalink
I did not see this movie, but I have a suggestion for the movie reviewers. Some movies are not for the commercial ailments. Bring out the actual merit in the movies. We do not want to know your opinion weather to watch it or not, but a critic which gives a real picture of the type of movie. So, criticize the things which were really bad. I heard that the performances, concept and music are really very good. The only bad thing is the violence part. So, viewers, see this movie if you want to see the real movie with some heart. Anyway, I need to wait till the DVD is released since, I do not have chance to watch this movie in theatre.
LEAVE A COMMENT
fullhyd.com has 700,000+ monthly visits. Tell Hyderabad what you feel about Nenu Devudini!
MORE MOVIES
Latest Reviews
Vakeel Saab
Wild Dog
Sulthan (Telugu)
Sulthan
Rang De (Telugu)
more
Saina
Aranya
Sashi
Chaavu Kaburu Challaga
Mosagallu
Gaali Sampath
Sreekaram
Jathi Ratnalu
A1 Express
Power Play
Contemporary Reviews
Chal Chala Chal
Mere Khwabon Mein Jo Aaye
Dev D
Siddham
Satyameva Jayathe
more
Billu
Seven Pounds
Underworld - Rise Of The Lyc...
Konchem Istam Konchem Kashta...
Srisailam
Victory - From Ashes To Glor...
Luck By Chance
Slumdog Millionaire
Raaz 2
Random Reviews
Machalta Shabab
Ammaaye Navvithe
Bhaggmati - The Queen Of For...
India - Kingdom Of The Tiger
Tom Yum Goong
more
Dollar Dreams
Tum Milo Toh Sahi
Kung Fu Panda 2
Jannat 2
Iddarammayilatho
Hrudaya Kaleyam
Hunterrr
Banjo
Agnyaathavaasi
Saaho
SEARCH MOVIES
Dissatisfied with the results? Report a problem or error, or add a listing.
ADVERTISEMENT
SHOUTBOX!
{{todo.name}}
{{todo.date}}
[
ip{{todo.ip}}
]
{{ todo.summary }}... expand »
{{ todo.text }} « collapse
First  |  Prev  |   1   2  3  {{current_page-1}}  {{current_page}}  {{current_page+1}}  {{last_page-2}}  {{last_page-1}}  {{last_page}}   |  Next  |  Last
{{todos[0].name}}

ADVERTISEMENT
This page was tagged for
nene devudu telugu movie ganja
Nenu Devudini telugu movie
Nenu Devudini reviews
release date
Arya, Pooja
Follow @fullhyderabad
Follow fullhyd.com on
About Hyderabad
The Hyderabad Community
Improve fullhyd.com
More
Our Other Local Guides
Our other sites
© Copyright 1999-2009 LRR Technologies (Hyderabad), Pvt Ltd. All rights reserved. fullhyd, fullhyderabad, Welcome To The Neighbourhood are trademarks of LRR Technologies (Hyderabad) Pvt Ltd. The textual, graphic, audio and audiovisual material in this site is protected by copyright law. You may not copy, distribute, or use this material except as necessary for your personal, non-commercial use. Any trademarks are the properties of their respective owners. More on Hyderabad, India. Jobs in Hyderabad.