Harry Potter And The Prisoner Of Azkaban Review 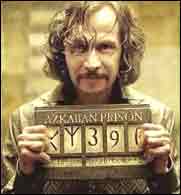 Deepa Menon / fullhyd.com
EDITOR RATING
6.0
Performances
Script
Music/Soundtrack
Visuals
NA
NA
NA
NA
Suggestions
Can watch again
NA
Good for kids
NA
Good for dates
NA
Wait for OTT
NA
All those sheepish adults in the Harry Potter aisle of the bookstore are going to have a tough time explaining to the world why Rowling's magic is not confined to the world of children alone. Before the movies hit the screens, they might have had a chance. But now, with each new Potter rotter, their stand gets shakier.

Agreed, it's a little late in the day to rant against the movies. But every fresh assault awakens you to how increasingly caricature-like these films are getting. And Prisoner Of Azkaban has to be the unkindest cut of them all, with an idiotic Sirius Black, a wobbly-faced Professor Lupin and some tattered bedsheets to pass off as the terrifying Dementors.

And to think this is the book where it all gets exciting. There's a killer on the loose, and while nobody knows how Black (Gary Oldman) got past the dreaded guards of Azkaban, everybody knows he's got unfinished business, i.e. Harry Potter. To capture the mass murderer, Dementors are posted at the gates of Hogwarts.

A little something about Dementors. These are not the funnest people to invite to a party. Decaying flesh and rattling breath aside, these creatures have the power to suck your soul right out of you with a single kiss. All these details the movie has down pat. But what it fails entirely to capture is the real terror of the Dementors, which is more psychological and lies in their ability to make you relive the worst tragedies of your life, over and over again.

Since Harry's worst memory is the death of his parents by Voldemort (the evilest of evil Dark Lord), he is most affected by the hooded bunch. Helping him expel the fear is the new Defence Against The Dark Arts teacher and closet werewolf, Remus Lupin (David Thewlis).

So with a little help from his friends Harry fends off attacks from a Boggart (not the one in Casablanca), hostile crystal balls, and a carnivorous textbook. Ron (Rupert Grint), Hermione (Emma Watson) and Hagrid (Robbie Coltrane) do their bit managing not to make their presence felt in any important way. But then, they hardly have a chance against the hyperactive props.

Special-effects-wise, Prisoner Of Azkaban is difficult to fault, and it earns its points almost entirely for this reason. It's not much else, but it is one heck of a thrill ride. The Marauder's Map, Buckbeak the hippogriff (half eagle, half horse) and a brilliant game of Quidditch, are few of the movie's most cunning recreations. Old favorites from the Chamber of Secrets, like the Whomping Willow and the Invisibility Cloak are still as good as before.

Back to the grouses. Perhaps the worst thing about the Potter series on celluloid is that it loses grip of the central story. While each book is a link that takes you closer to the dark heart of the feud between Harry and Voldemort, each movie seems solely to focus on how many cool computer graphics it can pack in. The characters just fill space, and even the casting is half-assed (Dumbledore is just plain inexcusable).

But admittedly this film is not just for geeky Potter freaks like this reviewer. In fact, we suspect Prisoner Of Azkaban is going to be watched largely by an audience of children and their respective grown-ups, easily a most forgiving lot. And they will definitely get their fill of laughs, frights and computer-generated magic.
Share. Save. Connect.
Tweet
HARRY POTTER AND THE... SNAPSHOT
HARRY POTTER AND THE PRISONER OF AZKABAN SNAPSHOT

ADVERTISEMENT
This page was tagged for
Harry Potter And The Prisoner Of Azkaban english movie
Harry Potter And The Prisoner Of Azkaban reviews
release date
Daniel Radcliffe, Emma Watson
theatres list
Follow @fullhyderabad
Follow fullhyd.com on
About Hyderabad
The Hyderabad Community
Improve fullhyd.com
More
Our Other Local Guides
Our other sites
© Copyright 1999-2009 LRR Technologies (Hyderabad), Pvt Ltd. All rights reserved. fullhyd, fullhyderabad, Welcome To The Neighbourhood are trademarks of LRR Technologies (Hyderabad) Pvt Ltd. The textual, graphic, audio and audiovisual material in this site is protected by copyright law. You may not copy, distribute, or use this material except as necessary for your personal, non-commercial use. Any trademarks are the properties of their respective owners. More on Hyderabad, India. Jobs in Hyderabad.