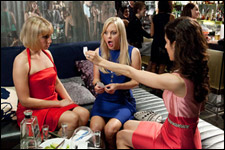 Nupur Barua / fullhyd.com
EDITOR RATING
5.0
Performances
Script
Music/Soundtrack
Visuals
5.0
4.0
6.0
7.0
Suggestions
Can watch again
No
Good for kids
No
Good for dates
Yes
Wait to rent it
No
Romantic comedies have been in forever, and wannabe writers play safe by publishing books along the lines of Sex And The City. It takes one movie to make or break an author these days, especially if it is a Hollywood movie. And that explains why a talk-show producer, Karyn Bosnak, who earned name and fame with her fantastic memoir Save Karyn, decided to give it all up to write mushy stories about true love.

What's Your Number? is based on Bosnak's first novel, 20 Times A Lady. According to findings based on a survey by Harvard (really? They have time to do all that?), the average number of men that an American woman sleeps with is 10.5. If, the survey says, that number exceeds 20, the woman concerned can forget getting married, because she will still be looking. And since in the modern world, a woman has to be married if she wants to be considered successful, Ally (Anna Faris) is desperate to find the perfect man, who will be her 21st.

Having lost her job, Ally continues to live in her fancy apartment, with sexy neighbour-cum-buddy across the hall Colin (Chris Evans) hiding in her living room every time he wants to avoid the woman he has slept with the previous night. Ally hires him to track down her ex-boyfriends to figure out if any of them could have been the one.

Still unemployed, but with enough money to travel across the country, Ally realises why they were all wrong. In the meantime, she also has to deal with her younger sister Daisy's (Ari Graynor) wedding, and her divorced parents who cannot stand each other.

You may wonder why the talented and qualified young woman would want to waste her life making a list of the men she has slept with, and worse, spending money to meet with them again, instead of looking for a job. Hold on, she has a dream, and a hobby, and America is the land that caters to all ambition, no matter how frivolous or irrelevant. Predictability then sets in, and you can guess the rest.

Anna Faris has yet to get out of the Scary Movie mode of acting if she wants to look like the girl-next-door. She is so busy trying to be funny that she forgets to be a romcom heroine. Contrived scripting ensures that all credibility is lost, as far as the character is concerned.

Chris Evans, who is now Captain America, need not go back to being the naughty young bachelor who loves taking off his clothes. He does have one of the fittest bodies in the industry, though, and that helps a bit, but it cannot salvage the lack of sincerity in his portrayal.

Two fine actors, Blythe Danner as the mother and Martin Freeman as the British ex, are wasted, but their appearance on screen is the only time that you find yourself smiling.

The over-rated concept of true love (Hollywood style) and the Bridget Jones-esque protagonist - both have been done to death, and yet, filmmakers never stop trying. It is not cute to be drunk at your sister's pre-wedding party, especially if you have to toast, and it is definitely not cute to lie to your various boyfriends about who you really are, but then, writers love to write that stuff and producers love to make films about such people.

The Commodores song, Three Times A Lady, although never played completely, is the only good thing about this re-hashed version of every romantic comedy that you have seen over the past decade. Everything else, including lighting, production design, and acting, is not worth spending money on.
Share. Save. Connect.
Tweet
WHAT'S YOUR NUMBER SNAPSHOT

ADVERTISEMENT
This page was tagged for
What's Your Number english movie
What's Your Number reviews
release date
Anna Faris, Chris Evans
theatres list
Follow @fullhyderabad
Follow fullhyd.com on
About Hyderabad
The Hyderabad Community
Improve fullhyd.com
More
Our Other Local Guides
Our other sites
© Copyright 1999-2009 LRR Technologies (Hyderabad), Pvt Ltd. All rights reserved. fullhyd, fullhyderabad, Welcome To The Neighbourhood are trademarks of LRR Technologies (Hyderabad) Pvt Ltd. The textual, graphic, audio and audiovisual material in this site is protected by copyright law. You may not copy, distribute, or use this material except as necessary for your personal, non-commercial use. Any trademarks are the properties of their respective owners. More on Hyderabad, India. Jobs in Hyderabad.