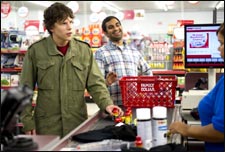 Nupur Barua / fullhyd.com
EDITOR RATING
2.0
Performances
Script
Music/Soundtrack
Visuals
5.0
2.0
6.0
5.0
Suggestions
Can watch again
No
Good for kids
No
Good for dates
No
Wait to rent it
Yes
Jesse Eisenberg, who is now synonymous with Facebook CEO Mark Zuckerberg, is never going to be able to pull off another comedy - an assessment based on his recent track record. A small glimmer of hope was apparent when he joined hands with Zombieland director Ruben Fleischer and producer Ben Stiller, to present to the world the rather aarbitrarily titled 30 Minutes Or Less; but the short running time of the movie is the best thing about it.

This R-rated comedy has a silly story, an incredibly random plot, and a rather daft portrayal of youngsters in modern-day America. Admitted that there are losers and bums all across the world, but why would anybody make a movie on them, especially if the protagonist achieves nothing noteworthy, and if the comedy is forced and the violence unnecessary?

Nick (Jesse Eisenberg) is a loser, and a pizza delivery guy, who has a problem adhering to the 30-minute rule in the pizza business. The movie opens with a late delivery, courtesy Nick, to a pair of adolescent boys, who obviously refuse to pay up.

Nick then says that he will get them beers for that money instead, and those boys are fooled. Question - if he is so intelligent and all American teenagers so dumb, then how come he falls prey to the events that follow?

Dwayne (Danny McBride) and Travis (Nick Swardson), with the help of stripper Juici (Bianca Kajlich) plan to get rid of Dwayne's tyrannical but loaded father (Fred Ward). They hire the famous hit man, Chongo (Michael Pena), but they have to pay him for his services, obviously. So they kidnap Nick, strap a time bomb on him and ask him to rob a bank.

Couldn't Dwayne have paid Chongo from the money that he will get with his father's demise, you ask? Of course, but that would have rendered Nick, the protagonist, useless in the script, and there would have been no movie. So Nick walks, with the bomb undetected, into supermarkets and other public places, trying his best to handle the situation. Helping him is his best (and only) friend Chet (Aziz Ansari), whose twin sister Katie (Dilshad Vadsaria) is Nick's old (and future) flame.

With this flimsy premise, 30 Minutes Or Less proceeds to become one of this year's worst-made movies (and there is enough competition for that title). The jokes are flat, the situations try too hard to be funny, and the only laugh-out-loud provoking moment comes, unwittingly, from Michael Pena. It can now be officially said - Hollywood comedies are as bad as Bollywood slapstick films.

Jesse Eisenberg, with a bedroom voice not quite matching the rest of him, is lifeless in the movie. He continues his The Social Network act. Aziz Ansari, a comedian in real life, is equally clueless about his character, and looks quite schizophrenic when he attempts to be funny.

The rest are not worth mentioning, except, of course, Michael Pena. The only saving grace is the lack of stereotyping of the various ethnic races that are a part of the movie. The track, The Heat Is On, in the middle of a chase sequence, is a welcome relief.

Completely avoidable, 30 Minutes Or Less is a disappointment, to Zombieland fans in particular and to movie-goers in general. If you insist on watching this brainless non-entertainer anyway, then we suggest you wait for the DVD release.
Share. Save. Connect.
Tweet
30 MINUTES OR LESS SNAPSHOT

ADVERTISEMENT
This page was tagged for
30 Minutes Or Less english movie
30 Minutes Or Less reviews
release date
Jesse Eisenberg, Danny McBride
theatres list
Follow @fullhyderabad
Follow fullhyd.com on
About Hyderabad
The Hyderabad Community
Improve fullhyd.com
More
Our Other Local Guides
Our other sites
© Copyright 1999-2009 LRR Technologies (Hyderabad), Pvt Ltd. All rights reserved. fullhyd, fullhyderabad, Welcome To The Neighbourhood are trademarks of LRR Technologies (Hyderabad) Pvt Ltd. The textual, graphic, audio and audiovisual material in this site is protected by copyright law. You may not copy, distribute, or use this material except as necessary for your personal, non-commercial use. Any trademarks are the properties of their respective owners. More on Hyderabad, India. Jobs in Hyderabad.