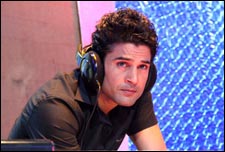 As a piece of art, Soundtrack lends itself to much criticism, since it is an imperfect film. But as a piece of heart, it scores. It had potential, and it is awkwardly clunky in certain areas, but on the whole, it is a story that strikes a few right notes.

Well, it's an official remake of an award-winning movie (the Canadian "It's All Gone Pete Tong"), so you'd think there's probably not much that can go wrong, but the point is that this has indeed turned out to be a nice little inspirational. Oh no - not the kind of inspirational you take school kids to on an excursion, unless you think in-your-face drugs and explicit sex make for great education.

Soundtrack is about a DJ who has to deal with a professional hazard - he goes tone deaf. Rajeev Khandelwal plays DJ Rounak, a successful Bandra DJ living it up in a villa by the beach. When he's not numbing himself with his wild lifestyle comprising sex, drugs and alcohol, he's composing incredibly popular tracks and driving crowds crazy. How his deafness sets in and how he deals with his condition is what the story is all about.

Flaws are aplenty. Rounak's initial characterization leaves much to be desired - the wild partying seems a force-fit. Rounak's "genius" is overrated, and the only way the film tries convince us he is one is by constantly telling us that he is (the "talking heads" concept, with real-life musicians, was pulled off quite well, though).

The masked alter-ego hanging around in every scene is a silly, artificial and disruptive concept. Also, the absurd lack of background music during conversations makes this feel like a tele-serial.

The peripheral characters are a bit sad. Yatin Karyekar is given too little to do, and Mohan Kapoor's role is half-baked - huge let-downs, these. And Rounak's mother is a lifeless character.

But then, this is an entirely novel way in which this disability has been shown in our films, and Soundtrack deserves credit for dealing with it delicately. Sure, it's not a medical treatise on hearing loss, but what Neerav Ghosh succeeds in is capturing the pain and trauma a person goes through while accepting a sudden, permanent malady. Permanent, and non-congenital - quite like having to have a limb amputated and living a whole new life, with your passion being taken away from you.

Rajeev Khandelwal makes things happen despite the handicapped script. He had said in a recent interview that doing the film was emotionally exhausting, and that is completely believable. Indeed, if you are tuned in to the drama, Soundtrack is quite moving - especially after Rounak finds his feet in the abyss he is plummeting into. Khandelwal is especially convincing when Rounak is in the acceptance mode, and, overall, an actor who's clearly doing his best.

Soha Ali Khan is disappointingly given a small role as Gouri, Rounak's lip-reading-coach-who-turns-girlfriend, but she doesn't disappoint. Gouri and Rounak have a couple of nice moments, but on the whole the coaching sessions could have had more substance.

The camera work is good. As for the narrative style, the talking heads we mentioned make this feel like a reality show, faux though it is. Anurag Kashyap's cameo is interesting mainly because he's Anurag Kashyap. The music leaves much to be desired - it's not even passable in some places. We could have had more of those old classics in the background, though.

In all, a pretty decent film for multiplex-goers to munch on, but only if you're looking for a movie high on emotion. Also, please do not take the kids along.
Share. Save. Connect.
Tweet
SOUND TRACK SNAPSHOT

ADVERTISEMENT
This page was tagged for
Sound Track hindi movie
Sound Track reviews
release date
Rajeev Khandelwal, Soha Ali Khan
theatres list
Follow @fullhyderabad
Follow fullhyd.com on
About Hyderabad
The Hyderabad Community
Improve fullhyd.com
More
Our Other Local Guides
Our other sites
© Copyright 1999-2009 LRR Technologies (Hyderabad), Pvt Ltd. All rights reserved. fullhyd, fullhyderabad, Welcome To The Neighbourhood are trademarks of LRR Technologies (Hyderabad) Pvt Ltd. The textual, graphic, audio and audiovisual material in this site is protected by copyright law. You may not copy, distribute, or use this material except as necessary for your personal, non-commercial use. Any trademarks are the properties of their respective owners. More on Hyderabad, India. Jobs in Hyderabad.