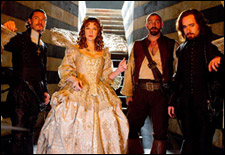 Nupur Barua / fullhyd.com
EDITOR RATING
5.0
Performances
Script
Music/Soundtrack
Visuals
7.0
5.0
6.0
8.0
Suggestions
Can watch again
No
Good for kids
No
Good for dates
Yes
Wait to rent it
Yes
Everybody loves a classic, and Alexandre Dumas's The Three Musketeers is no exception. Apparently, Dumas's original work in French, Les Trois Mousquetaires, set in the 17th century, was so scandalous for the conservative society of England that it was heavily censored in translation.

That results in an unlikely advantage for this story over many others - it has many versions, and therefore provides a filmmaker with countless options to interpret and incorporate as he pleases (remember the Tom And Jerry mouseketeer?). Which is exactly what Anderson has done in the latest version of The Three Musketeers, in 3D.

The movie, shot in Germany (Bavaria and Potsdam-Babelsberg), released in Europe first, and then in India. It will be released in the US only next week.

The three musketeers, Athos (Matthew Macfayden), Porthos (Ray Stevenson) and Aramis (Luke Evans), are in search of Da Vinci's secret vault, somewhere in Italy. They need to source an important document that can change the history of warfare.

Accompanying them is the feisty Milady de Winter (Milla Jovovich), who is Athos' lover. As they celebrate their successful mission, they discover that Milady is actually working for the Duke of Buckingham (Orlando Bloom), who steals the document from them.

In Paris, Cardinal Richelieu (Christopher Waltz) is the de facto ruler of the kingdom. King Louis XIII (Freddie Fox) and his wife Queen Anna (Juno Temple) are very young, and more interested in fashion and other fun things than in running a country. The Cardinal is in cahoots with Buckingham, and there are plans to overthrow the French king. Milady is their mutual accomplice.

Into this environment enters D'Artagnan (Logar Lerman), who wants to become a musketeer. He offends the jaded trio (Athos, Porthos and Aramis), and challenges each of them to a duel.

Fortunately for all of them, the Cardinal's guards try to break up their illegal duelling, and the four together defeat the 40 men. D'Artagnan also meets Constance (Gabriella Wilde), the Queen's lady-in-waiting, and falls in love with her.

What exactly is Buckingham up to, however? To find out how D'Artagnan and the trio join hands to unravel conspiracies and defend their country's dignity, you will have to watch the film. Dumas loyalists may wonder why Milady and Buckingham join hands, and why the Queen is a faithful wife, but, as mentioned earlier, creative licence is what makes one musketeer movie different from the other. It gives the plot some direction, and it makes villains out of the British, again (not a popular lot in Europe in the 19th century, one assumes).

Many characters from the book are done away with, and Planchet (James Corden) is the only servant for the musketeers. The Cardinal is evil, true, but very little is revealed about the political scenario of the time. If the script is to be believed, then the Cardinal and Buckingham are the only ones calling the shots.

Milady's persistent attempts to kill D'Artagnan are not mentioned, and Constance is an unmarried, virginal girl. Also, as opposed to the book, it is Milady who betrays Athos. One wonders if the filmmakers are as prudish as the 19th century British.

The casting department played it safe - they cast actors who are known for their roles in period dramas. Matthew Macfayden is trimmer now and makes a convincing Athos. Porthos is not too different from Titus Pullo of Rome, both played by Ray Stevenson. Luke Evans is indifferent, and Logan Lerman, aka Percy Jackson, has a long way to go.

As for Orlando Bloom, he sneers and acts dandy, but he is beaten hollow by Christopher Waltz, the Austrian-German actor, who has been proving his versatility in English movies since Inglourious Basterds. Freddie Fox is terrific as the fashion-conscious and insecure King of France. Milla Jovovich frankly looks better in movies like Ultraviolet, despite her death-defying stunts.

Shot entirely on 3D, The Three Musketeers has some great action sequences and visuals. The movie, however, lacks the fanfare and pomp that goes hand in hand with 17th century France - which is a relief, but the story does not make up for it. A disappointingly average film, this one does not belong to the swashbuckler genre, despite the fencing and stunts. The 1993 Walt Disney Pictures version is far superior, but nothing beats reading the book all over again.
Share. Save. Connect.
Tweet
THE THREE MUSKETEERS (3D) SNAPSHOT

ADVERTISEMENT
This page was tagged for
The Three Musketeers (3D) english movie
The Three Musketeers (3D) reviews
release date
Logan Lerman, Matthew Macfayden
theatres list
Follow @fullhyderabad
Follow fullhyd.com on
About Hyderabad
The Hyderabad Community
Improve fullhyd.com
More
Our Other Local Guides
Our other sites
© Copyright 1999-2009 LRR Technologies (Hyderabad), Pvt Ltd. All rights reserved. fullhyd, fullhyderabad, Welcome To The Neighbourhood are trademarks of LRR Technologies (Hyderabad) Pvt Ltd. The textual, graphic, audio and audiovisual material in this site is protected by copyright law. You may not copy, distribute, or use this material except as necessary for your personal, non-commercial use. Any trademarks are the properties of their respective owners. More on Hyderabad, India. Jobs in Hyderabad.