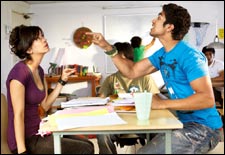 Deepa Garimella / fullhyd.com
EDITOR RATING
6.0
Performances
Script
Music/Soundtrack
Visuals
7.0
6.0
7.0
7.5
Suggestions
Can watch again
No
Good for kids
No
Good for dates
Yes
Wait for OTT
Yes
Welcome to the fancy, fancy Bollywood college world. A world of inter-college rock festivals and poolside birthday parties. A world in which an educational institution's silver jubilee function is themed "Love". A world in which "saccha pyaar" is to be found only during a college festival, and couples who "realize" it must kiss on stage in front of a cheering audience. A world where youngsters joke "Dude! She needs to get laid!!" when bitching about someone.

If you're approximately 18 years old, you're the target audience for Yash Raj Films' foray into the youth segment (have you not seen their youth division's logo yet?), and the film is likely to hit it off with you as well. Indeed, YRF is going all out to make this as "relevant" as possible to the people it is trying to appeal to, as its online campaigns show.

Indeed, there's nothing objectionable or bad about MFK, as much as it will seem alien to a wide section of audiences. Populated by pretty people speaking Hinglish college lingo, the movie sets out to explore a romance in the current Facebook age of instant friend requests, cappuccino and vodka shots.

Ever had a crush in your teens that you thought merited a whole film around it and that, after 10 years, now seems silly and foolish? Well, MFK's plot is essentially that. Preity (Saba Azad) is infatuated with local rock star Rahul Sareen (Nishant Dahiya), while the rock star's friend Vishal (Saqib Saleem) has the hots for Preity's friend Malvika (Tara D'Souza). Meanwhile, Vishal and Preity hate each other (of course, in the they-hate-each-other-but-are-so-going-to-end-up-together way).

A couple of friend requests on Facebook later, there are cross-connections and proxy romances, while the real love stories are brewing below the surface. Confused? For a very large part, so were we.

Nupur Asthana, the director, is someone who gets her target audience: the clickety-clacky ease with which crushes develop and dissolve, and the innate confusion of a 20-something who's smart about some things and completely dumb about others. Not surprising, seeing as it comes from the writer-director of the memorable TV series Hip Hip Hurray. The wisdom about how chat and SMS are poor ways to find romance comes about in a very welcome filmi extempore speech by Vishal, which is a relief, except for the fact that it is only in the end.

She also glams it up suitably well, creating an aspirational brand of "youth" that kids want to ape - the pubbing, the dressing, the elaborately done-up rooms at affluent homes, the gadgets, the conversations, the hobbies.

However, the extra dollops of hep-ness and the blatant transplantation of American high school behaviour into an Indian college may grate a viewer who's not as young as this movie demands. The confusing plot won't help matters if you already don't feel connected to the film.

The acting is pretty good across the board. Mita Vasisht and a few TV actors are the only familiar faces in a movie that is otherwise made with fresh, unknown actors.

Raghu Dixit's compositions are innovative without being jarring, with, again, much youthfulness being packed in the numbers.

Like we said, you could watch it once if you're about 18, but those who're older will have to skip it. Which, in our opinion, is not that bad an option.
Share. Save. Connect.
Tweet
MUJHSE FRAAANDSHIP KAROGE SNAPSHOT

ADVERTISEMENT
This page was tagged for
mujhse fraaandship karoge movie in hindi
mujhse fraaandship karoge dual audio hindi movie
Mujhse Fraaandship Karoge hindi movie
Mujhse Fraaandship Karoge reviews
release date
Follow @fullhyderabad
Follow fullhyd.com on
About Hyderabad
The Hyderabad Community
Improve fullhyd.com
More
Our Other Local Guides
Our other sites
© Copyright 1999-2009 LRR Technologies (Hyderabad), Pvt Ltd. All rights reserved. fullhyd, fullhyderabad, Welcome To The Neighbourhood are trademarks of LRR Technologies (Hyderabad) Pvt Ltd. The textual, graphic, audio and audiovisual material in this site is protected by copyright law. You may not copy, distribute, or use this material except as necessary for your personal, non-commercial use. Any trademarks are the properties of their respective owners. More on Hyderabad, India. Jobs in Hyderabad.