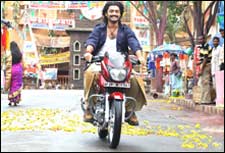 EDITOR RATING
3.0
Performances
Script
Music/Soundtrack
Visuals
NA
NA
NA
NA
Suggestions
Can watch again
NA
Good for kids
NA
Good for dates
NA
Wait for OTT
NA
The best time to watch Vijayadasami is 20 years back. The only flip side is, we do not know if Saridon was invented then yet. On the positive side, sleep was.

Vijayadasami is so clichéd, you know what happens next 3 hours before it happens. When Kalyan Ram went all over the promos claiming that this was a hardcore commercial movie, he wasn't kidding - they seem to have made the movie from a checklist rather than from a script. You feel sorry for yourself so often as you watch this one, you become perfect at it.

Sivakasi (Kalyan Ram) is a welder who can beat up a dozen macho armed men single-handedly - something only Telugu and (to a lesser extent) Tamil films still show in the whole wide world. When he's not doing stupid things like cutting up his own shop's shutter to show off his machismo to a bunch of goons, he's lecturing young girls on how they should dress, mouthing such horrible clichés, the air in the theater is thick with the collective embarrassment of an entire audience.

The girl Devi (Vedika) however is too dumb to realize that this doesn't work in impressing girls, and gets impressed by it. She even offers to sleep with him. Really, it's a long shot, don't try it.

Anyway, when Devi's rich family find out that she is seeing a welder, they try to kill him. You too are more or less okay with it given how Sivakasi is terrorizing you with his overacting. Which really is unjustified - we at fullhyd.com are close friends with several welders, and we can vouch for the fact that not all welders are terrorists. Sheesh, not even all terrorists are welders.

However, Sivakasi survives the attack, and reveals to Devi's family how he is not an orphan with unknown lineage, but is the grandson of NTR and nephew of Balakrishna and cousin of NTR Junior. Okay, so he doesn't actually say that, but if you miss the point from all the incredible amount of vamsam plugs, you really deserve to sit through this one.

So Sivakasi is actually the son of Rajeswara Rao (Suman), a rich patriarch in a village in interior Andhra, and gets thrown out of home at a very young age due to the machinations of his evil elder brother Durga Prasad. In order to get married to Devi, however, he has to get his family to formally participate, and so, after 15 years, goes back to his village. However, he notices that Durga Prasad has turned a complete tyrant now following the death of his father.

Contrary to the norm, Vijayadasami bores you more in the first half than in the second. There are perhaps about 20 minutes worth watching in the second half in the battle of wits between Sivakasi and Durga Prasad, but for that you have to survive the first half, which is really not worth it - neither the first half, nor surviving it.

Kalyan Ram looks a little foolish in the attempts to be stylish. He does make an impact, and is fairly expressive, but it certainly cannot save the film. Vedika is impressive, and while Sai Kumar is not the scariest of villians, he delivers what is written for him. Suman and Jayasudha are seasoned performers.

The film doesn't score either on music or on any visual parameters - the graphics are actually pretty cheesy. And there's nothing much by way of comedy either, adding to the screenplay woes.

Stay away from this one - else, it will stay with you for a long while.
Share. Save. Connect.
Tweet
VIJAYADASAMI SNAPSHOT

ADVERTISEMENT
This page was tagged for
vijayathasamitelugumovie suman jayasudha
Vijayadasami telugu movie
Vijayadasami reviews
release date
Nandamuri Kalyan Ram, Vedika
Follow @fullhyderabad
Follow fullhyd.com on
About Hyderabad
The Hyderabad Community
Improve fullhyd.com
More
Our Other Local Guides
Our other sites
© Copyright 1999-2009 LRR Technologies (Hyderabad), Pvt Ltd. All rights reserved. fullhyd, fullhyderabad, Welcome To The Neighbourhood are trademarks of LRR Technologies (Hyderabad) Pvt Ltd. The textual, graphic, audio and audiovisual material in this site is protected by copyright law. You may not copy, distribute, or use this material except as necessary for your personal, non-commercial use. Any trademarks are the properties of their respective owners. More on Hyderabad, India. Jobs in Hyderabad.