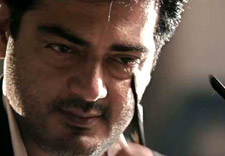 Deepa Garimella / fullhyd.com
EDITOR RATING
5.0
Performances
Script
Music/Soundtrack
Visuals
8.0
5.0
7.0
8.0
Suggestions
Can watch again
No
Good for kids
No
Good for dates
No
Wait to rent it
Yes
He walks, not with a brash swagger, but in quick steps, with his upper body leaning forward, with the quiet efficiency of a CEO who has meetings to attend, deals to seal, business to be conducted. A man who has work to do. A man who has no time to be a hero.

This quiet, no-nonsense approach is what lends Mr. David Billa the magnetism that is usually reserved for a hero, despite the fact that he's actually a villain. Helped amply in the film's mission of glorifying this charismatic crook is the star whose vehicle this actually is - Ajith, who, apart from making eye bags look cool, discards decibel for screen presence.

And yet, David Billa, the movie, doesn't keep you as hooked as a crime thriller this ambitious ought to. The film isn't nearly as compelling as its protagonist is intriguing, and you realize by the interval that things are getting pretty tiresome soon.

The movie borrows heavily from Scarface, including Al Pacino's permanent snarl. David Billa (Ajith) is a refugee from Sri Lanka, who arrives on Indian shores. After outwitting a corrupt cop who schemed to falsely implicate him in a smuggling racket, Billa enters the drug business, endearing himself to Goa's drug kingpin Abbasi (Sudhanshu Pandey).

When Billa is sent to Russia for a mission, he craftily takes on more than his job description, entering Abbasi into a tie-up with the deadly arms dealer Dimitri (Vidyut Jamal). Abbasi is not too happy with Billa wresting control of his affairs, but only until he realizes that Billa is the key to his own rise in power.

David Billa is a slick film with high technical value, but it packs too many angles into the central plot. There is Abbasi, Dimitri, a CM, an aspiring CM, the aspiring CM's son, Abbasi's flunky, and a host of police officers. It's all exciting at first, but you realize that there are no new games to be played, no new crevices to be explored.

There's a point in the film beyond which you stop caring for whatever's happening, and that point is the interval. By the time the climax arrives, you actually do not know who is fighting what. It is only David Billa, the man, who keeps you engaged, and not the events unfolding around him. Billa is also suprisingly romantically/sexually indifferent, limiting his interactions with his women to merely flinging gifts at them.

Ajith silently steals his way through the show, and if he had a solid fan base in AP, this film would have worked. Sudhanshu Pandey, Vidyut Jamal and the person who plays Kannan are other notable faces in the movie. Bruna Abdullah is limited to her skin show, while Parvathy Omanakuttan has some tear-shedding to do.

But the movie boasts of superb visual values, as well as some fine music by Yuvan Shankar Raja (although the songs aren't memorable, the background score is impactful). The title montage, done up in graphic-novel-like sketches, screams cool.

We'd recommend David Billa only if you are rooting for Ajith. Keep the kids out, though.
Share. Save. Connect.
Tweet
DAVID BILLA SNAPSHOT 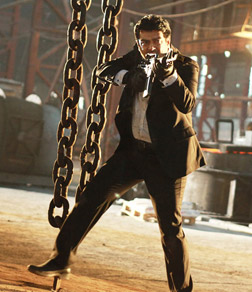 ADVERTISEMENT
This page was tagged for
David Billa telugu movie
David Billa reviews
release date
Ajith, Sudhanshu Pandey
theatres list
Follow @fullhyderabad
Follow fullhyd.com on
About Hyderabad
The Hyderabad Community
Improve fullhyd.com
More
Our Other Local Guides
Our other sites
© Copyright 1999-2009 LRR Technologies (Hyderabad), Pvt Ltd. All rights reserved. fullhyd, fullhyderabad, Welcome To The Neighbourhood are trademarks of LRR Technologies (Hyderabad) Pvt Ltd. The textual, graphic, audio and audiovisual material in this site is protected by copyright law. You may not copy, distribute, or use this material except as necessary for your personal, non-commercial use. Any trademarks are the properties of their respective owners. More on Hyderabad, India. Jobs in Hyderabad.