Confessions Of A Shopaholic Review 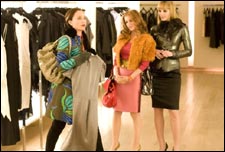 Samrat Sharma / fullhyd.com
EDITOR RATING
3.5
Performances
Script
Music/Soundtrack
Visuals
6.5
1.5
5.0
5.0
Suggestions
Can watch again
No
Good for kids
No
Good for dates
No
Wait for OTT
Yes
A year ago, even six months ago, Confessions Of A Shopaholic would have been an easy-to-dismiss factory-produced brand-name-comedy among Sex And The City and The Devil Wears Prada. After the economic slowdown, much of which has been attributed to American wasteful spending, this comedy is ironically amusing on a level the makers never intended it to be.

The weird thing, this bauble of a film wouldn't have been anything worth mentioning if hadn't been for topicality. This is the stuff Bollywood fever dreams are made of. It's weird that this film seems fascinating, almost like an ancient thing you see after a whole generational shift, when it is relatively new.

Isla Fisher plays Rebecca, a journalist who loses her job when the magazine she works for shuts shop. We slowly get know her 16,000 dollar debt, and a penchant for making poor decisions. Desperate, she gets a job at another magazine called Successful Savings, not because she has the skills to do the job, but because the boss (Hugh Dancy) is charmed by her.

She is given a column straightaway, which she turns into a look into the financial world through the eyes of high fashion brands. Only in a film as dim-witted as this does a column like that become a runaway success, and she finally starts realizing her cycle of bad decisions. Or not.

It's worth mentioning that thankfully, Isla Fisher herself is the movie's only saviour. She is full charm, verve, and the camera loves her. If it wasn't for her this would have been unbearable to watch, mostly because Rebecca is a hateful, empty, stupid, frivolous girl, who has wasted much of her life and savings. She has no redeeming qualities except that she is played by Fisher.

Confessions Of A Shopaholic has all that you would expect in a film such as this - bad writing, terrible direction, the works. It's a bad movie, and even the interest garnered by topicality does not last beyond the first few scenes. Worse still, even with an almost gargantuan cast, it manages to waste terrific comic actors like John Lithgow, John Goodman and Kristin Scott Thomas. Especially Thomas, who deserves much, much better than this quick pay-cheque role she did.

This is an empty vacuous flick with no redeeming factor except Fisher's charm, and the great ensemble that populates it. Even in the end, there is never a lesson learnt about chasing brands lustfully. It's a movie that condones what has led that country to a spiral that has affected us, and I can't rightly say I recommend this film.
Share. Save. Connect.
Tweet
CONFESSIONS OF A SHOPAHOLIC SNAPSHOT

ADVERTISEMENT
This page was tagged for
Confessions Of A Shopaholic english movie
Confessions Of A Shopaholic reviews
release date
Isla Fisher, Hugh Dancy
theatres list
Follow @fullhyderabad
Follow fullhyd.com on
About Hyderabad
The Hyderabad Community
Improve fullhyd.com
More
Our Other Local Guides
Our other sites
© Copyright 1999-2009 LRR Technologies (Hyderabad), Pvt Ltd. All rights reserved. fullhyd, fullhyderabad, Welcome To The Neighbourhood are trademarks of LRR Technologies (Hyderabad) Pvt Ltd. The textual, graphic, audio and audiovisual material in this site is protected by copyright law. You may not copy, distribute, or use this material except as necessary for your personal, non-commercial use. Any trademarks are the properties of their respective owners. More on Hyderabad, India. Jobs in Hyderabad.