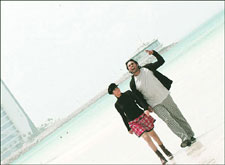 EDITOR RATING
5.0
Performances
Script
Music/Soundtrack
Visuals
NA
NA
NA
NA
Suggestions
Can watch again
NA
Good for kids
NA
Good for dates
NA
Wait for OTT
NA
Priyasakhi is a movie with its heart in the right place - it's the brains that are not in the right place. The theme is incompatibility between a couple, and how a marriage breaks up. Now you understand. High on content, low on BO potential.

Like everyone knows, people go to films to enjoy themselves, not brood. They need to look forward to what will happen next, not dread it. The lesser the time that you keep a person depressed by what's happening on screen, the better the chances that he'll come out and at least not say anything negative.

Intelligent script-writing then is about window-dressing your script so that interesting and entertaining things are happening on screen even when the main theme at the background is depressing. The way perhaps films like Kal Ho Na Ho were made to work.

Priyasakhi fails there. You are upset for about 60% of the film's screening time - right from the time that the lead couple first starts showing signs of incompatibility, to when the heroine finally starts feeling love for the hero again. That's approximately from the 30th minute to the 130th minute - 100 minutes of a 150-minute film. That's bad writing.

Radhakrishna (Madhavan) sees Priya (Sada) modelling in Dubai, and falls in love with her. He courts her cleverly (for the time being at least, we'll assume it's clever) and she falls in love too. They marry despite he coming from a traditional South-Indian family and she being the daughter of a ruthlessly materialistic socialite (Aishwarya) who will breathe only air-conditioned air.

It's when she moves into his house and starts living with the joint family that the fissures start. It's like all relationships - there are mistakes from both sides, and the mistakes are painfully obvious to a viewer who's seeing it from outside. Except that if you were in the same position, you would perhaps have done the same thing.

The film eventually takes a pro-Radhakrishna line, with the marriage breaking up when Priya drinks in a party in full view and defiance of Radhakrishna's family and gets slapped by Radhakrishna when she abuses his family. This is when most of the logic also deserts the film. The rest of the film has them filing for divorce, Radhakrishna winning an order restraining Priya from getting an abortion and that he will be able to stay with her to ensure that she is careful until delivery.

This part could have been handled innovatively - it certainly is a promising prospect for viewers when an estranged couple has to stay together. However, it isn't. It's easy to blame it on Priya being such an immature brat, or on Radhakrishna's brash ripostes. The actual blame lies in the, yes, poor writing. And the script stretches credibility beyond all borders in this part.

The film does have some thought - it sensitises you to the perils of marrying someone with a completely different lifestyle, how the cookie crumbles when love stops being a bulletproof vest. Aside of that, it is full of tackiness in conceptualization that begs credulity. The way Radhakrishna courts Priya, for example. And the whole last hour. People want to believe that what happens in the movies is possible, and that they just need to develop some skills. This one overcomes even that generous crutch that narrating a story on screen props up.

This is a dubbed film, in case you did not know, but it is still easy to see that Madhavan is good. And so is Sada. The performances are not the problem. It just doesn't have the kind of light-heartedness, music or visual spectacle that a theme like this needs buffering its viewers.

The film was made in Hindi as Shaadi Karke Phas Gaya Yaar. The fate of that one is perhaps an indicator of this one's watchability.
Share. Save. Connect.
Tweet
PRIYASAKHI SNAPSHOT

ADVERTISEMENT
This page was tagged for
priyasakhi telugu movie
priyasakhi movie review
sambasivapriyasakhi
Priyasakhi telugu movie
Priyasakhi reviews
Follow @fullhyderabad
Follow fullhyd.com on
About Hyderabad
The Hyderabad Community
Improve fullhyd.com
More
Our Other Local Guides
Our other sites
© Copyright 1999-2009 LRR Technologies (Hyderabad), Pvt Ltd. All rights reserved. fullhyd, fullhyderabad, Welcome To The Neighbourhood are trademarks of LRR Technologies (Hyderabad) Pvt Ltd. The textual, graphic, audio and audiovisual material in this site is protected by copyright law. You may not copy, distribute, or use this material except as necessary for your personal, non-commercial use. Any trademarks are the properties of their respective owners. More on Hyderabad, India. Jobs in Hyderabad.