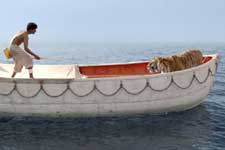 Nupur Barua / fullhyd.com
EDITOR RATING
8.0
Performances
Script
Music/Soundtrack
Visuals
7.0
8.0
7.0
9.0
Suggestions
Can watch again
Yes
Good for kids
Yes
Good for dates
Yes
Wait for OTT
No
Ang Lee said, in a recent interview, that Life Of Pi has been his most exhausting movie yet. No other director could have done it justice, though. Ang Lee brings Yann Martel's book to life in the most astounding two hours that you will see in the near future.

If you have read the Booker Prize winning Life Of Pi, you already know the story. Piscine Molitor Patel, named after the clearest swimming pool in the world, has a lot going for him as he grows up in Pondicherry in the late 1960s and 1970s. His parents (Tabu and Adil Hussain), who own a zoo, pretty much leave him alone to explore and discover religions and relations. As he grows from a young boy to adolescent teen, the Hindu Pi embraces Christianity and Islam without letting go of his religion, and his agnostic father despairs at what he thinks is his son's indecisive nature.

Growing up, Piscine overcomes the stigma associated with his unpronounceable name (his classmates call his "Pissing", but he comes up with a remedy to make himself famous by impressing upon them how cool the shortened version - Pi - is), falls in love, and has an idyllic life. Till he turns 17. With the change in the Indian political and economic scene, his father decides to sell the zoo and migrate with all the animals to Canada, in search of a better life.

So Pi (Suraj Sharma) finds himself on a Japanese cargo ship with his parents, his brother Ravi, a motley crew of sailors, cooks and others and all the animals from his parents' zoo, sailing on the Pacific Ocean. Disaster strikes in the form of a fatal thunderstorm that leaves all but Pi, a zebra, a hyena, an orang utan, and the pride of the zoo, the Bengal Tiger named Richard Parker, drowned and dead.

As the teenager struggles to stay afloat and alive for 227 days, he discovers the meaning of spirituality, love, relationships, miracles, survival, and God.

Ang Lee does not deviate from the book at all, and Life Of Pi admirers will find little to bicker about as far as the story is concerned. It is a tale within a tale - an older Pi (Irrfan Khan), now settled in Canada - narrates his extraordinary story to a writer (Rafe Spall) who is in search of inspiration for his next book. Lee understands the importance of traditional oral chronicles, and yet ascertains that the voice-over does not distract from the events unfolding on the screen.

However, what enthusiasts of the book may have a problem with is the lack of emphasis on the soul of the story. The near-superficiality that Lee adopts in dealing with the underlying themes of spirituality, God and illusions, is a little disappointing. It is almost as if the director wants to spoon feed the audience, rather than letting one experience what Pi does (this, as opposed to the book). He also seems to oversimplify the message that Yann Martel gave his readers more than a decade ago, thus undermining the intelligence and sentiments of the audience. Strong empathy, the main attraction of the book, is lacking in the movie.

And then he makes up for all the miniscule flaws by making Life Of Pi the best 3D movie that has ever hit theatres. There are no gimmicks, no edge-of-the-seat moments, and no unnecessary cinematic devices to impress movie-goers. If anything, Ang Lee presents all the cruelty, savagery, tragedy, horror and other surprises in a very matter-of-fact manner. You almost forget that you are watching a 3D movie - it comes as a surprise to find those glasses on your nose - so seamlessly is the technology incorporated in the cinematography. The visual effects and camera work are spectacular, for lack of a better word - and yet so natural that you are sucked into this fantastical world of Pi that Lee envisioned. Who knew that endless visuals of water and infinite horizons could bring a lump in your throat? The Rhythm & Hues Studio has outdone itself.

The biggest surprise is the blink-and-you-miss-him cameo by Gerard Depardieu as the nasty cook. Tabu is visible in a slightly longer role, but the French actor leaves a better impression. Also, Tabu speaks Tamil with a distinctive Telugu accent, and for some perfectionists, this may be jarring.

As far as accents go, Irrfan Khan speaks in a strange one. It is a clever touch, giving him an Indian-Canadian accent, but the younger Pi, Suraj Sharma, has better vocabulary and clearer diction. This disregard to continuity may cost Lee some fans. Adil Hussain is the most consistent of the lot - even when he manages to yell in French.

All the actors, as far as performances go, do well, Suraj Sharma is the hero of the film, and for a newcomer, he shows extreme confidence. He is overshadowed, though, by Richard Parker, the sometimes-real-sometimes-CG tiger and clearly the star.

The production design has a lot of pastel shades, and the garishness associated with Hollywood versions of India is missing, thankfully. There is some confusion about the period that the movie is set in, as far as portrayal of the times is concerned. Costumes are authentic. The music is haunting.

A definite must-watch, Life Of Pi may just make it to the Oscars next year, despite the absence of big (international) stars. Children may find some sequences scary and horrifying, so parental guidance is recommended, but do go with your family to watch what Barack Obama calls (in his appraisal of the book) "an elegant proof of God, and the power of storytelling."
Share. Save. Connect.
Tweet
LIFE OF PI SNAPSHOT 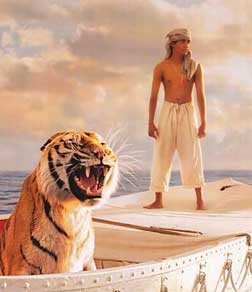 ADVERTISEMENT
This page was tagged for
Life Of Pi english movie
Life Of Pi reviews
release date
Suraj Sharma, Irrfan Khan
theatres list
Follow @fullhyderabad
Follow fullhyd.com on
About Hyderabad
The Hyderabad Community
Improve fullhyd.com
More
Our Other Local Guides
Our other sites
© Copyright 1999-2009 LRR Technologies (Hyderabad), Pvt Ltd. All rights reserved. fullhyd, fullhyderabad, Welcome To The Neighbourhood are trademarks of LRR Technologies (Hyderabad) Pvt Ltd. The textual, graphic, audio and audiovisual material in this site is protected by copyright law. You may not copy, distribute, or use this material except as necessary for your personal, non-commercial use. Any trademarks are the properties of their respective owners. More on Hyderabad, India. Jobs in Hyderabad.