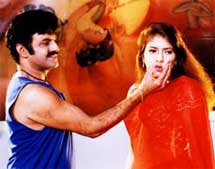 EDITOR RATING
7.0
Performances
Script
Music/Soundtrack
Visuals
NA
NA
NA
NA
Suggestions
Can watch again
NA
Good for kids
NA
Good for dates
NA
Wait to rent it
NA
'Laugh, and the world laughs with you,' seems to be E V V Satyanarayana's policy. And so the laughs continue unabated in his films. Goppinti Alludu too has its share of mirthful laughter.

It is a simple plot. Balakrishna, who does not want to marry the girl that his father S P Balasubramanyam has chosen for him, runs away to Switzerland, where he encounters Simran who is lost in the new country. After unnecessarily haranguing her (all in a good spirit, of course) and singing a high-handed song, Balakrishna falls in love with Simran. Ditto with Simran.

But they cannot marry because of many reasons. One of them being that Simran is the illegitimate granddaughter of Satyanarayana, who, in spite of this fact, loves her dearly. But the main reason is that S P Balasubramanyam, who goes to talk about the marriage proposal to Satyanarayana, happens to crash into Satyanarayana himself. Simran's sister, who is waiting like a snake in the grass to shed her venom on her sister, albeit secretly, induces her uncles and aunts to beat up Balasubramaniam.

Bowing down to the wishes of Balasubramaniam, Balakrishna does not go to settle scores. Instead, he decides to go as the cook of the house so that he can reform them, and make them agree to their marriage. (Aren't you reminded of a Govinda film? You have company, so are we.) We all know what the outcome would be, so let's leave aside talk about the rest.

The movie perfectly suits the image of Balakrishna, and the script gives him ample scope to display his mannerisms; the only problem is that he seems to be on the wrong side of forty. Simran, as the Cinderella of the house, looks as if she has lost something. Sanghavi, as the venomous sister, does a wonderful job. In fact, she excels so well in the role that she completely overshadows Simran. And then there is the comedy brigade of Kota Srinivasa Rao, Mallikarjun and L B Sriram who add to the laughs.

Goppinti Alludu is a laugh riot all through, you'll enjoy it.
Share. Save. Connect.
Tweet
GOPPINTI ALLUDU SNAPSHOT

ADVERTISEMENT
This page was tagged for
simran goppinti alludu
goppinti alludu
Goppinti Alludu
Goppinti Alludu telugu movie
Goppinti Alludu reviews
Follow @fullhyderabad
Follow fullhyd.com on
About Hyderabad
The Hyderabad Community
Improve fullhyd.com
More
Our Other Local Guides
Our other sites
© Copyright 1999-2009 LRR Technologies (Hyderabad), Pvt Ltd. All rights reserved. fullhyd, fullhyderabad, Welcome To The Neighbourhood are trademarks of LRR Technologies (Hyderabad) Pvt Ltd. The textual, graphic, audio and audiovisual material in this site is protected by copyright law. You may not copy, distribute, or use this material except as necessary for your personal, non-commercial use. Any trademarks are the properties of their respective owners. More on Hyderabad, India. Jobs in Hyderabad.