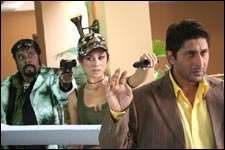 Krishna KBS / fullhyd.com
EDITOR RATING
2.0
Performances
Script
Music/Soundtrack
Visuals
4.0
3.0
3.0
5.0
Suggestions
Can watch again
NA
Good for kids
NA
Good for dates
NA
Wait to rent it
NA
Mr. White Mr. Black starts with its tongue firmly planted in the cheek, and sucking a lollipop to boot - although it is not the film that is chewing on a confectionery, but one of the three girls who've just robbed diamonds worth Rs. 25 crores by beating the daylights out of muscular security guys, resorting to Matrix-style stunts. After pulling off the heist without a hitch, they lie low in Goa.

These diamonds belong to a don Laadla (Aasish Vidyarthi) who, with his piping-voiced stooge, lands up in Goa in search of the three girls, and soon ends up in front of a police inspector (Sharat Saxena).

Meanwhile, Gopi (Sunil Shetty) comes to Goa in search of Kishen (Arshad Warsi). Now, Gopi is the Mr. White in the title. You might wonder at why he is called as such, as I did. And you might conclude, like I did, that it is because of the acting capabilities of Shetty, which are as bland and blank as a white-washed wall.

However, that apparently is not the rationale - or at least not the only raison d'Ãªtre. Gopi is a squeaky-clean person, and is even made to wear a white kurta in the movie - not just to save expenses on the costumes front, though that might be an overriding reason, but to imprint the aforementioned image in the minds of the viewer.

Mr Black, of course, is Arshad Warsi, who is still cashing in on the 'black' dress that he wore as Circuit (in the Munnabhai films). Kishen is a swindler, who as fate (or the script-writer) would have it, lands in the police station via a run-in with Sharat Saxena, just when Laadla is relating the loss of his diamonds.

Well, what happens next can be guessed by anyone who is fed a regular diet of Bollywood. Kishen steals the diamonds from the girls, and the movie ends up being such a chaotic fare in the second half that one is left looking back at the half-baked first half with more than a hint of nostalgia.

Arshad Warsi sleepwalks through the film, though he still manages to make us giggle, hoot, and chortle. However, this time around we are not laughing with him, but at him - as he makes a mockery of himself in his vain attempts to pass off as a stud. Sunil Shetty gives a new meaning to the term "evergreen", as he still seems to be acting like a greenhorn.

Sharat Saxena is the best of the lot, and there must be something wrong with the script if the audience in search of humour welcomes the villain (Vidyarthi). The girls have nothing much to do except prance around half-naked and mouth some of the most inane lines ever heard in a Hindi film.

Technically, the movie is just about there; though I am not sure if using Phone Booth style split screens mindlessly makes a film more stylish. The production values are noteworthy, if not praiseworthy - leading you to believe that someone mistook substance for soul. The same holds true for the music, with cacophony camouflaged as disco.

The fact is Mr. White Mr. Black does force us to do a lot of soul-searching - with "why did I ever venture into the theatre" being the first and most oft-repeated question, though it is not the only one. I, at least, have the valid excuse of watching the movie because of my job. But do you have an equally compelling reason?
Share. Save. Connect.
Tweet
MR. WHITE MR. BLACK SNAPSHOT