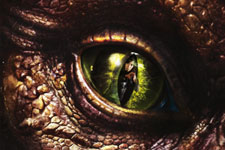 Kritika Deval / fullhyd.com
EDITOR RATING
3.0
Performances
Script
Music/Soundtrack
Visuals
3.5
1.5
3.0
4.0
Suggestions
Can watch again
No
Good for kids
No
Good for dates
No
Wait to rent it
No
Well, Creature 3D has cleared up two things for us:

1. Bipasha Basu is perhaps the only actress ever to get away with not using her bosom to articulate all emotions in a Bhatt film.
2. Not even Basu can make their Hindi textbook dialogues sound less stupid.

Oh, and one more thing. That Creature 3D is a 3D film. About a Creature.

Enter "Professor" Sadana (Mukul Dev) and his "scientific" theories, and we now have a definition - a Brahmarakshas, which is apparently a man-lizard-Salman creature which kills for no reason you want to burden your mind with. And it is up to Ahana and Sadana (sitting on a tree, K I S S I N G) (not!) to make it stop.

Oh, it's all entirely predictable, but we're not quite sure that you'll walk out of the theatre entirely unentertained. You see, amid the sighs, and the screams, and the moos of a creature that probably should not be mooing, there lie moments of sheer hilarity that keep your eyes glued to the screen in the way a dying bug or a feeding spider or a falling baby would. And no, we are not entirely awful people. It is merely that an overload of cinema has shown us that the potential for a laugh is not the exclusive domain of things that make you feel good about being human.

Whether it is Bipasha's efforts at pretending that everything happening around her is perfectly reasonable, or how earnestly bad an actor Naqvi is, or how sincere Mukul Dev is in his role, or the fact that the Creature exists the way it exists, you will find plenty of reasons in every single frame to either abuse the stroke of providence (FYI, it was all you) that landed you in this theatre at this time, or to just burst out in indignant guffaws, thus making everyone around you badmouth their own fate.

Then, too, there is the soundtrack that is too cheesy for the '90s, a screenplay that plays lip service to its own definition, and graphics that look like Salvador Dali collaborated with a five-year-old. Oh, don't even get us started on the dialogues. We rather admire the cast for not giving up on the movie entirely. Or maybe not. That means we had to watch it.

So, should you watch it? No, of course not! Have you not read anything? If you really want to see this movie, just relegate it to the same position in your bit of space-time that you have saved up for that Tabu "masterpiece" Hawa.
Share. Save. Connect.
Tweet
CREATURE (3D) SNAPSHOT 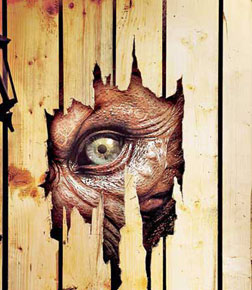 ADVERTISEMENT
This page was tagged for
Creature (3D) hindi movie
Creature (3D) reviews
release date
Bipasha Basu, Imran Abbas
theatres list
Follow @fullhyderabad
Follow fullhyd.com on
About Hyderabad
The Hyderabad Community
Improve fullhyd.com
More
Our Other Local Guides
Our other sites
© Copyright 1999-2009 LRR Technologies (Hyderabad), Pvt Ltd. All rights reserved. fullhyd, fullhyderabad, Welcome To The Neighbourhood are trademarks of LRR Technologies (Hyderabad) Pvt Ltd. The textual, graphic, audio and audiovisual material in this site is protected by copyright law. You may not copy, distribute, or use this material except as necessary for your personal, non-commercial use. Any trademarks are the properties of their respective owners. More on Hyderabad, India. Jobs in Hyderabad.