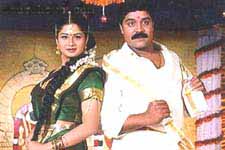 EDITOR RATING
5.0
Performances
Script
Music/Soundtrack
Visuals
NA
NA
NA
NA
Suggestions
Can watch again
NA
Good for kids
NA
Good for dates
NA
Wait to rent it
NA
If you are entering a theater to watch this, then you obviously are the kind that enjoys drama and emotions mouthed out energetically, and on that front you aren't disappointed. If you are the kind that enjoys classy narration with subtlety being the theme of expression, however, then you would not enter a theater to watch this, and you wouldn't be disappointed for that. This is strictly for the former, and definitely not for the latter. We mean, you either dig senti films with talkative characters, or you don't. There are few in-betweens.

The story was last original when Pandanti Kaapuram was released 4 decades ago. It was last re-presented 4 weeks ago when, in Maa Annayya, Rajashekhar sacrifices his life's desires, including his girlfriend, to bring up his brothers the hard way.

Working harder than that and even showering the love and affection of a mother (as he claims repeatedly in the film), Srihari tries to outdo Rajashekhar in this hackneyed family drama. But with his cultivated mannerisms and forceful dialogue delivery, he provides a fast pace to the film, the absence of which is Maa Annayya's undoing.

Bangaru Sundaraiah (Srihari), an attendant in a bank, shoulders the responsibility of bringing up his brothers as he has promised to his mother on her deathbed. Though he is the second of three brothers and a sister, the mother chooses him as she believes that the eldest is the innocent kind. Sundaraiah brings up his kin so lovingly that they address him as daddy and not as bhayya! His love for his brothers Sambasiva Rao (Aahuti Prasad) and Venkateswara Rao (Brahmaji) is so unselfish that he sacrifices his job in favor of his younger brother, his provident fund money for his elder brother's business and his pension for his sister's marriage.

The brothers are the usual greedy type who, when the family's position gets tough, try to disown the brother and his wife. Soon realizing his folly, Sundaraiah decides to teach them a lesson. And so he sells his house for a handsome amount of Rs 70 lacs and starts living in opulence, refusing to share the money with his brothers. The latter, in a fortuitous turn of events, lose their riches and are on the verge of penury. Do we need to tell you the rest?

Srihari excels as the Big Brother, nay, Big Daddy, and the in-house dialogue writer comes up with some good lines that perfectly suit his image. Srihari is slowly shedding that rattling nature of dialogue delivery, so the film is easier on the ears compared to his earlier ones.

Deepti, as Srihari's wife, acts well, considering the fact that this is her first film. Then there is Kota Srinivasa Rao who acts like the snake in the grass to separate the brothers. A couple of dialogues mouthed by him are interesting. This is the first: Chevitodi mundu Sivaji Raja paadinaa okate, Ilaya Raja paadinaa okate. Then try this, Godavari pongi voollo vaallu ediste, gattu meeda pettina naa sabbu edi andata neelaantidi.

ADVERTISEMENT
This page was tagged for
mayana sundarayya new telugu mp3 songs
Ma annayya audio sangs
maa Shana sundarayya Telugu mp3
Ma ayana sundara tha songs download
2020 Telugu naa sangs
Follow @fullhyderabad
Follow fullhyd.com on
About Hyderabad
The Hyderabad Community
Improve fullhyd.com
More
Our Other Local Guides
Our other sites
© Copyright 1999-2009 LRR Technologies (Hyderabad), Pvt Ltd. All rights reserved. fullhyd, fullhyderabad, Welcome To The Neighbourhood are trademarks of LRR Technologies (Hyderabad) Pvt Ltd. The textual, graphic, audio and audiovisual material in this site is protected by copyright law. You may not copy, distribute, or use this material except as necessary for your personal, non-commercial use. Any trademarks are the properties of their respective owners. More on Hyderabad, India. Jobs in Hyderabad.