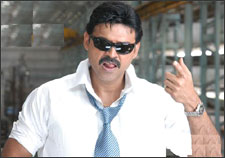 EDITOR RATING
7.0
Performances
Script
Music/Soundtrack
Visuals
NA
NA
NA
NA
Suggestions
Can watch again
NA
Good for kids
NA
Good for dates
NA
Wait to rent it
NA
It's the biggest release of Sankranti, and there's never a better time to be just another face in the crowd - there's a bonhomie as you jostle with the bursting masses, ask for some of the millions of the paper shreds in free circulation, and scream, bounce around and hoot in the perfect cacophony of the festive spirit as the curtain rises on the first-day-first-show of one of Tollywood's biggest stars. That you are at Sriramana at Amberpet is the icing - this is the real "mass", the people who make it look like Banjara Hills and Begumpet are but settlements.

In addition, the crowds know just when Venkatesh is about to enter. Oh boy, do they.

Lakshmi is all the hype actually leading to a good product. It helps that it stars Venkatesh, of course. Amongst the best actors of the Telugu screen, he sets the screen on fire in the dialogues and the action segments, tickles you even in anticipation of the comic scenes - he's perhaps the most talented at comedy among Telugu's lead heroes - and makes the women cry with impugnity in the emotional scenes. And when you are built like he is, the fights are reservoirs of adrenaline.

Lakshmi Narayana (Venkatesh) is an orphan who, along with his sister, is brought up by a small-scale industrialist, Rammohan Rao (Ranganath). It's a debt he chooses to repay with lifelong loyalty to the family, and painstakingly builds the industry into a thousand crore group, while simultaneously taking great care of his brothers and sisters as they grow up after their Dad's death. The entry of Venkatesh, with great hoopla as he responds to a call from his sister who is in trouble with some ruffians at college, drives the crowds crazy, and shows just why V V Vinayak is so successful with mass movies.

Lakshmi once fires Jagannath Rao (Sayaji Shinde), a manager who forges his signature, and gets him thrown in jail. Rao gets out, becomes big in some years, and comes back for revenge. He does what you know he'll do - he splits the family by befriending Lakshmi's brothers, and gets them to throw Lakshmi himself out of the family and the business. But Lakshmi cannot forget his loyalty, and continues as an ordinary worker in the very factory he once ran, so as to protect his brothers from Rao's wile.

There are quite a few scenes and dialogues that make you whistle and roar your approval, like ones where Venkatesh's sister comes to his rescue as he is getting insulted in the factory, and where Sunil slams his own father. The film, of course, belongs to Venkatesh. It has quite a bit of family sentiment, and an equal share of violence - Lakshmi makes a powerful enemy in Kolkata when he rescues the girl he falls in love with, Nandini (Nayana Tara), from a local don who then comes to Hyderabad for revenge.

When Vinayak displays his penchant for mass masala, the necessary by-product is that the women have nothing to do. Charmme is used strictly as a necessary ingredient for duets, while the pretty Nayana Tara has a relatively more meaningful role, "relatively" being the important word. Venu Madhav and Telangana Sakuntala are in a ticklish comic track. Venkatesh's own comic capability is, however, under-utilized - this film is primarily violence and sentiment.

The music is assembly-line, but might become popular since the film itself is likely to do pretty well. On the whole, this doesn't have a dull moment, and is the perfect film for Sankranti.
Share. Save. Connect.
Tweet
LAKSHMI SNAPSHOT

See Lakshmi full details
LAKSHMI USER REVIEWS
1 - 7 OF 7 COMMENTS
POSITIVE  |  NEGATIVE |  NEWEST  |  OLDEST  |  MOST HELPFUL  |  LEAST HELPFUL
USER RATING
7.1
117 USERS
Performances
Script
Music/Soundtrack
Visuals
NA
NA
NA
NA
Can watch again - NA
Good for kids - NA
Good for dates - NA
Wait to rent it - NA
Rahul on 23rd Jan 2006, 12:04pm | Permalink
Venky & Senty has become a common theme these days! For those who care - this movie is not as horrible as Vasantham, it is neither as good as Nuvvu Naku Nachav. It prolly is closer to Vasantham than anythin else. Avoid this and rent Shatruvu or Chinna Rayudu instead - u wont be disappointed!
RATING
4
Kiran Nadella on 19th Jan 2006, 4:06am | Permalink
C'mon guys! It sure is better than many movies that have been released offlate!
RATING
6
Babu Aarya on 18th Jan 2006, 4:23pm | Permalink
WORST MOVIE.
RATING
2
Krish Dev on 16th Jan 2006, 5:07pm | Permalink
Yes, I agree with Raj Antar. This review seems to have been written by one of the producers of the movie. Though honestly I am a big fan of Venkatesh, since his Kaliyuga Pandavulu-days, on its face, i can say that it conceals more and reveals less. The review does not give a fair (read honest) idea about any of the departments. C'mon Fullhyd., you cant take sides.
RATING
4
Raj Antar-gary@yahoo.com on 15th Jan 2006, 10:05pm | Permalink
this review is very atypical of fullhyd..

why are you hiding your face dude...come out..give your name..

ADVERTISEMENT
This page was tagged for
Lakshmi Venkatesh movie
Lakshmi movie Victory Venkatesh
Lakshmi Venkatesh Telugu movie
Lakshmi Telugu Venkatesh movie
Lakshmi Telugu movie Venkatesh
Follow @fullhyderabad
Follow fullhyd.com on
About Hyderabad
The Hyderabad Community
Improve fullhyd.com
More
Our Other Local Guides
Our other sites
© Copyright 1999-2009 LRR Technologies (Hyderabad), Pvt Ltd. All rights reserved. fullhyd, fullhyderabad, Welcome To The Neighbourhood are trademarks of LRR Technologies (Hyderabad) Pvt Ltd. The textual, graphic, audio and audiovisual material in this site is protected by copyright law. You may not copy, distribute, or use this material except as necessary for your personal, non-commercial use. Any trademarks are the properties of their respective owners. More on Hyderabad, India. Jobs in Hyderabad.