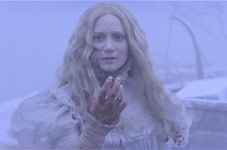 Nupur Barua / fullhyd.com
EDITOR RATING
7.0
Performances
Script
Music/Soundtrack
Visuals
7.0
6.0
6.0
8.0
Suggestions
Can watch again
Yes
Good for kids
No
Good for dates
Yes
Wait to rent it
No
Guillermo del Toro said, in an interview a couple of years ago, that his films always have a "strong connection with fairy tales and horror" now, and that there are always "consequences" to those fables. Even though he has been creatively associated with movies such as Kung Fu Panda 2, Megamind and The Hobbit: The Battle of the Five Armies, del Toro has become the father of all things horror in contemporary cinema. And his latest movie, Crimson Peak, does not disappoint die-hard fans.

Edith Cushing (Sofia Wells) is a lonely little girl. Her late mother appears as a ghost and tells her to beware of Crimson Peak. This cryptic message from the other world is not one that little Edith understands, but she never forgets it. Edith's father, industrialist Carter Cushing (Jim Beaver), loves his daughter, but is rather protective of her. As a result, she grows up not knowing much about the real world.

More than a decade later, Edith (Mia Wasikowska) is a pretty, if somewhat pale, young woman. This is when the titled Englishman, Sir Thomas Sharpe (Tom Hiddleston), walks into the Cushing world. He wants to venture into business with Carter Cushing, but that deal does not work out. In the meantime, however, Edith and Thomas become romantically involved, much to her father's chagrin. Even Edith's childhood friend, Dr Alan McMichael (Charlie Hunnam), disapproves. Cushing Sr. also discovers some rather unpleasant truths about Thomas' existence.

Love, however, triumphs, and, despite another visit from her mother's ghost, who warns her of Crimson Peak again, Edith manages to marry Thomas and shift to England. And that is when her troubles begin. Not only is Thomas's dilapidated mansion instrumental in making her violently ill, she has to contend with his sister, Lucille (Jessica Chastain). The latter, in particular, seems to have some deep, dark secret that makes her bitter and dangerous. Edith has to find out what that is, and what her husband is hiding, too, before she fades into oblivion.

The ghosts are not the scary part of the movie. In fact, Crimson Peak is more of a psychological thriller, which questions relationships and the futility of falling in love. It tells us that love is dangerous, no matter how exhilarating it may seem initially, if we do not know what we are letting ourselves into. The character of Edith is a tragic one, for most part. She is weak, and does not seem to have much common sense. Yet, somehow, she is the one you empathise most with.

Not that the main villain, Lucille, does not deserve sympathy. A young woman growing up in a twisted house cannot be expected to know any better. In that, Edith and Lucille are more alike than they know, albeit with different agendas. Trapped between them is Thomas, who finds love - an emotion he is unfamiliar with - with Edith. He is torn between loyalty to his sister and the urge to revel in this newly discovered feeling.

Guillermo del Toro makes the idea of exploring relationships, past and present, a scary prospect. He uses the elements necessary to fit the movie into the horror genre - the crumbling house, the dark shadows, and, most importantly, a cloudy, depressing England as the backdrop. With the tale set sometime in the 19th century, the lack of electricity is a blessing for the cinematography and lighting. All those candles and lamps make the narrative eerier. The visuals alternate between bursts of colour and almost monochromatic settings, enough to make your senses reel. The dialogues are simple, and the plot itself is not very complicated. However, even the most predictable scares can jolt you.

Mia Wasikowska is not the best actor of the lot, but she manages to hold your attention. Her character whines a bit too much, and she may come across as irritating at times, though. Jessica Chastain, on the other hand, is terrific. After del Toro's Mama, in which she played a victim (sort of), this is a role reversal for her. Tom Hiddleston is overshadowed. He is at his best when he is Loki - it is somehow difficult for him to convince you that he can be anything else.

Crimson Peak is a typical movie of the genre, and it has enough ghosts to last you a lifetime. Guillermo del Toro knows his art and craft, and he does not shy away from hitting you with his brilliance. This is the perfect movie if you want some chills and thrills. Remember to take somebody along, though - it can be quite difficult to watch this one alone.
Share. Save. Connect.
Tweet
CRIMSON PEAK SNAPSHOT 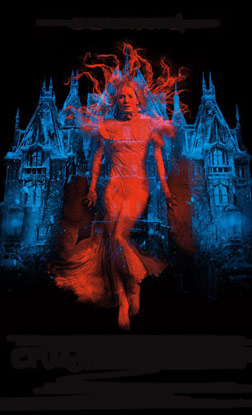 ADVERTISEMENT
This page was tagged for
Crimson Peak english movie
Crimson Peak reviews
release date
Mia Wasikowska, Jessica Chastain
theatres list
Follow @fullhyderabad
Follow fullhyd.com on
About Hyderabad
The Hyderabad Community
Improve fullhyd.com
More
Our Other Local Guides
Our other sites
© Copyright 1999-2009 LRR Technologies (Hyderabad), Pvt Ltd. All rights reserved. fullhyd, fullhyderabad, Welcome To The Neighbourhood are trademarks of LRR Technologies (Hyderabad) Pvt Ltd. The textual, graphic, audio and audiovisual material in this site is protected by copyright law. You may not copy, distribute, or use this material except as necessary for your personal, non-commercial use. Any trademarks are the properties of their respective owners. More on Hyderabad, India. Jobs in Hyderabad.