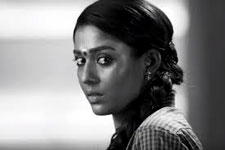 T J Reddy / fullhyd.com
EDITOR RATING
4.0
Performances
Script
Music/Soundtrack
Visuals
7.0
3.0
5.0
6.0
Suggestions
Can watch again
No
Good for kids
No
Good for dates
No
Wait for OTT
Yes
A Rube Goldberg machine is a contraption designed to perform a simple task in an indirect and over-complicated fashion; so sayeth Wikipedia. We chuckle and marvel at the intricacies of this machine all while sub-consciously being aware of the banality of the outcome. Airaa's opening credits are set to the motions of such an arrangement. Setting our eyes upon that, we wondered if the movie's outcome would be banal or if writer/director Sarjun was a man capable of making the outcome of his story as grand as the intrigues preceding it.

Airaa follows a month in the life of Yamuna (Nayantara). She is the sexpert on a local newspaper, a feminist and a person focusing on her career and not on relationships right now. A series of events that begin with her scooter getting dented result in her taking a leave of absence from her workplace and personal life. She retreats to her grandmother's house in an unassuming rural setting. During her stay in said house, she challenges herself to become a YouTuber, and sure enough, acquires millions upon millions of views by creating fake ghost videos.

Little does she know that the dead aren't known for their senses of humour. Soon, she is put through the wringer by a murderous entity, and Yamuna takes it upon herself to rid the world of this spirit by any means necessary.

As we mentioned earlier, the USP of a Rube Goldberg machine or a series of dominoes is its intricacy. Every piece of the elaborate puzzle must be inch perfect to not ruin the flow of the endeavour. A movie's narrative works in somewhat the same way. When an audience is presented with a piece of cinema with a mediocre emotional payoff, it is imperative that the film has a tight-knit plot to keep them engaged. Airaa's fatal folly is that it is stunted in both the story and the plot departments.

Neither Yamuna nor Bhavani nor the circumstances they find themselves in are compelling all by themselves, and the plot is in service of their journey in small doses only. The momentum isn't strong enough to keep the dominoes falling, and at certain instances, the spacing between the aforementioned dominoes isn't accurate enough to prevent a lowly domino in the chain from falling flat on its face with no cushion from its comrade. At every such instance, the script, the director or a well-worn film cliché steps in to add that little push required to keep the narrative ticking along. While the narrative does move, the illusion is shattered beyond salvage.

In an attempt to add weight to a feather-light film, Nayantara does to female-led cinema what so many leading men have done to male-centric films and will continue to. Her transformation into the meek and submissive Bhavani is a sight to behold. We rarely get to see Nayantara flex her range as an actress as she has carved herself a niche of being a powerful on-screen presence. While Yamuna is a prototypical character she could pull off while half-asleep, Bhavani requires her full dedication, and the Lady Superstar delivers in spades. Subtle nuances she displays while portraying the image of a frail woman who has been trampled upon by her circumstances serve as a reminder of what one of this generation's finest actresses has in her arsenal.

As she steps forward, everyone and everything else about the movie takes a step back. Kalaiyarasan's character which is the moral centre of the film is as milk toast, white bread and one-note as they come. He is good because he's good, and that's good to know.

Staying on the level of good and never elevating themselves to great are the movie's score, cinematography, editing and understanding of the internet. All these elements exist to make the film look like a decent horror flick, but none of them is ever memorable enough to leave a resonant impact on your mind. A viewer is as close to genuinely buying into Yamuna or Bhavani's plight with the story the way it is presented as they are to believing a character became a YouTube sensation over a lazy weekend.

These conveniences and contrivances are the crucial crippling factors of this cinematic chore. With the audience never getting a chance to experience an affecting story or watch an intricate plot fall into place with all the elegance and panache of Bob Ross painting happy little trees, the movie has a snowball's chance in hell of giving you your money's worth. That being said, there is a kid growing into a teenager every day, and they need a few movies to scare them before the real world takes over.
Share. Save. Connect.
Tweet
AIRAA SNAPSHOT 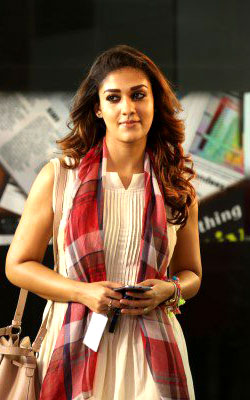 ADVERTISEMENT
This page was tagged for
airaa movie ghost face
Airaa telugu movie
Airaa reviews
release date
Nayanthara, Kalaiyarasan
Follow @fullhyderabad
Follow fullhyd.com on
About Hyderabad
The Hyderabad Community
Improve fullhyd.com
More
Our Other Local Guides
Our other sites
© Copyright 1999-2009 LRR Technologies (Hyderabad), Pvt Ltd. All rights reserved. fullhyd, fullhyderabad, Welcome To The Neighbourhood are trademarks of LRR Technologies (Hyderabad) Pvt Ltd. The textual, graphic, audio and audiovisual material in this site is protected by copyright law. You may not copy, distribute, or use this material except as necessary for your personal, non-commercial use. Any trademarks are the properties of their respective owners. More on Hyderabad, India. Jobs in Hyderabad.