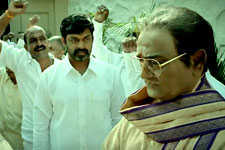 T J Reddy / fullhyd.com
EDITOR RATING
3.0
Performances
Script
Music/Soundtrack
Visuals
3.0
2.0
3.0
1.0
Suggestions
Can watch again
No
Good for kids
No
Good for dates
No
Wait for OTT
Yes
The last time we saw NTR on-screen, he had won his second general election, become the Chief Minister of an undivided Andhra Pradesh, and said goodbye to his beloved wife, Basavatarakam. "Kuch paane ke liye kuch khona padta hain" and all the thematic significance that comes with that off-handed movie quote.

With Lakshmi's NTR, we are in 1989 and made privy to the fact that NTR (P Vijay Kumar) has been usurped from power again (by the people of Andhra Pradesh this time around). He is a man who has now lost his veneer of invincibility, and in his darkest hour, gains his biographer and future wife, Lakshmi Parvathi (Yagna Shetty). With Parvathi by his side, he regains the people's trust and becomes their leader yet again. But in the process he loses the intimacy he shared with his family. On a parallel track, C B Naidu (Shri Tej) loses his humanity and lurches towards making the role of Chief Minister of Andhra Pradesh, his own.

Even if the cyclical nature of loss and gain were the thematic centre of Ram Gopal Varma's latest film (rest assured, it is not), we don't think we would have enjoyed it as much as we did his one-sided, poorly made, shoddily acted, jarringly scored, haphazardly edited and painfully long political hit-piece.

Movie-going is an inherently flawed process. No other industry requires its customers to pay the same amount of money for both a good and a bad product. To indulge in the ambience of a Michelin Star restaurant, you need to pay the appropriate price. To experience the real taste of the corner store anna's pulihora, you pay a much lower price. Given a choice, we would have pooled all the money we'd paid to watch all three NTR-related movies, divided that amount by 10, taken the resulting amount, bought ourselves a cosy plate of delicious pulihora at anna's quaint shop, and saved ourselves the trouble of watching Anna garu's stellar legacy beaten to death by the great Indian political system, for one last time.

We would pay a king's ransom to see the inner machinations of Ram Gopal Varma's mind. There is so much happening in that distinctly shaped head of his, so much cinematic output that comes out of it and yet so precious little that sticks with the public, at large. He is a man who is all out of f*cks and good movies to give. He may be the only mainstream director that can get an audience to come to the cinema hall even while making his film look as good a TV soap opera.

This lack of agency and motivation bleeds into the characters and actors. Shri Tej's C B Naidu is a villain so evil that he might twirl his ample beard instead of a cliched handlebar moustache when no one is looking. This movie's versions of NTR and Lakshmi Parvathi are such angelic figures that we have insider information about the good Lord above being ready to offer them a seat in his court. The make-believe Nandamuri family the film presents seem like they were picked right out of a '90s comedy show where mimicking actors to the point of caricature was all the rage. None of these persons is relatable, but they are gut-bustlingly hilarious simply because of the misguided earnestness with which they approach their roles.

With the bad acting and poor writing come RGV's trademark camera angles and bombastic music. Kalyani Malik's tunes aren't bad per se, but they become insufferable because of how the movie's sound is mixed. The score is mixed at the same pitch as the movie's dialogues, and the cacophony of disorienting noise that creates made us pray for a sweet painless delve into deafness.

While our ears were under constant assault with no respite in sight, our eyes were bored with how RGV's camerawork has lost its lustre. With no discernible editing pattern driving these awkward shots, the film begs to be ridiculed by film purists and casual audiences alike.

Let us wind up this torrid time with tedium by talking about those audiences every filmmaker and politician claims to respect. All three NTR-based films released over the first quarter of 2019 claimed that no matter what anyone says or does, the people know the truth. No amount of propaganda can ever change their minds because the people are number one. And by not appearing at theatres on one end and by piercingly ridiculing a farce of a film on the other, the people have made themselves and their opinions loud and clear. The people know the truth alright: the real question is, "Are filmmakers and politicians ready to accept it?"
Share. Save. Connect.
Tweet
LAKSHMI'S NTR SNAPSHOT 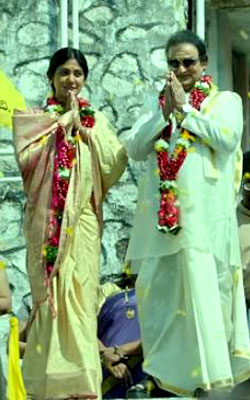 ADVERTISEMENT
This page was tagged for
Lakshmi's NTR telugu movie
Lakshmi's NTR reviews
release date
P Vijay Kumar, Yagna Shetty
theatres list
Follow @fullhyderabad
Follow fullhyd.com on
About Hyderabad
The Hyderabad Community
Improve fullhyd.com
More
Our Other Local Guides
Our other sites
© Copyright 1999-2009 LRR Technologies (Hyderabad), Pvt Ltd. All rights reserved. fullhyd, fullhyderabad, Welcome To The Neighbourhood are trademarks of LRR Technologies (Hyderabad) Pvt Ltd. The textual, graphic, audio and audiovisual material in this site is protected by copyright law. You may not copy, distribute, or use this material except as necessary for your personal, non-commercial use. Any trademarks are the properties of their respective owners. More on Hyderabad, India. Jobs in Hyderabad.