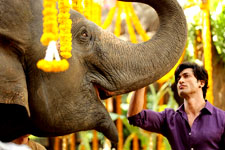 Punarvasu Pendse / fullhyd.com
EDITOR RATING
4.0
Performances
Script
Music/Soundtrack
Visuals
5.0
4.0
4.0
7.0
Suggestions
Can watch again
No
Good for kids
Yes
Good for dates
No
Wait for OTT
No
If you expected the Hollywood treatment in Junglee, with it being director Chuck Russell's first foray into India, you will feel let down. It is nowhere near movies like The Scorpion King which made Russell so well-known.

Sure, Mark Irwin's cinematography is easily world-class and the strongest feature of the movie. Lush green jungles, friendly elephants and impressively shot action sequences make Junglee remarkably pleasing to the eye. Russell and Irwin, at the very least, manage to portray a world that seems living and breathing. But it all goes downhill from there.

Equal parts family drama and build-up for Raj Nair (Vidyut Jamwal), the first half showcases the return of the prodigal son to his roots, taking a break from his hectic veterinary practice in Mumbai. He is sort of followed by eager journalist Meera to the Chandrika elephant sanctuary - Meera wishes to interview the sanctuary founder and Raj's father (Thalaivasal Vijay).

Along the way we meet obvious love interest Shankara (Pooja Sawant), a mahout who helps take care of the sanctuary, and Raj's friend and competitor for Shankara's affection Dev (Akshay Oberoi), a forest ranger. We are also introduced to the adorable elephants, including the majestic Bhola, who was once Raj's childhood friend and is now the leader of a herd. An international poaching and smuggling ring bribes its way into their lives, and a catastrophic encounter has Raj vow revenge.

Junglee has only one objective post-interval - showcasing Raj's quest for vengeance. There is simply nothing that cannot be done by him - shrugging off bullet wounds, fighting unarmed versus goons packing sharp weapons, single-handedly fending off three corrupt officials while handcuffed, using whatever he can get his hands on against firearm-wielding henchmen... Raj powers through pretty much every obstacle thrown at him. There is a comically surreal moment before the climax involving Lord Ganesha (of course), but the focus is squarely on the protagonist.

Junglee is neither an all-out action movie where everything goes nor one for kids with its multiple deaths and unsavoury advances towards Shankara by the poacher. It also has a script that fails to get the viewer rooted to any human character (though the elephants are a different story altogether). Everything in the film's fairly mediocre script comes across as trivial, be it death, violence or even sorrow. At no point are you completely engrossed in the proceedings, and despite Jamwal's fantastic physique, it becomes tedious to watch the constant macho bravado the script keeps forcing on to him.

Vidyut Jamwal does a bang-up job in the action bits - doing his own stunts, and transferring his real life Kalariyapattu skill phenomenally onto the screen. It is a pity he appears strangely disconnected from his fellow actors. Pooja Sawant is feisty as Shankara, but a tad unbelievable as she supposedly rides elephants while maintaining perfect hair and make-up. Debutant Asha Bhat tries her best to bring life to an unmemorable character, and almost manages to pull it off. Atul Kulkarni is unconvincing as the "shikari" who lives for the hunt, and he feels devoid of any malice making it hard to hate him. Makrand Deshpande and Thalaivasal Vijay play the respective fathers of Dev and Raj, with Deshpande especially being let down by the script.

The music is largely forgettable, with "Fakira Ghar Aaja" being the only song that has any chance of being an earworm. The soundtrack is annoyingly loud at times, especially the music that comes on when sweeping shots of elephants are on the screen. Junglee also feels like it is confused about its setting - it cannot make up its mind about whether it is set in Odisha or in Kerala (and the actual location it was filmed in happens to be in Thailand).

There were a couple of kids in the theatre this reviewer saw the movie in who were clapping and cheering throughout. So it boils down to this - if you have kids, if you really enjoy human-animal bonds in movies, or if you are a huge fan of Vidyut Jamwal, Junglee would be a decent weekend entertainment option. If not, you are probably better off catching the other movie releasing this week which also features lovable pachyderms.
Share. Save. Connect.
Tweet
JUNGLEE SNAPSHOT 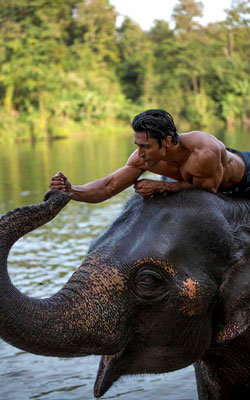 ADVERTISEMENT
This page was tagged for
Junglee hindi movie
Junglee reviews
release date
Vidyut Jammwal, Pooja Sawant
theatres list
Follow @fullhyderabad
Follow fullhyd.com on
About Hyderabad
The Hyderabad Community
Improve fullhyd.com
More
Our Other Local Guides
Our other sites
© Copyright 1999-2009 LRR Technologies (Hyderabad), Pvt Ltd. All rights reserved. fullhyd, fullhyderabad, Welcome To The Neighbourhood are trademarks of LRR Technologies (Hyderabad) Pvt Ltd. The textual, graphic, audio and audiovisual material in this site is protected by copyright law. You may not copy, distribute, or use this material except as necessary for your personal, non-commercial use. Any trademarks are the properties of their respective owners. More on Hyderabad, India. Jobs in Hyderabad.