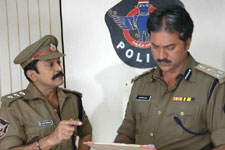 Ravi Kandala / fullhyd.com
EDITOR RATING
1.0
Performances
Script
Music/Soundtrack
Visuals
2.0
2.0
2.0
2.0
Suggestions
Can watch again
No
Good for kids
No
Good for dates
No
Wait to rent it
No
Mahankali has a lot of things to its credit. Like the fact that this is the 98,76,54,321st movie in which Rajasekhar acts as a cop. And the fact that this is the 12,34,56,789th movie in which Pradeep Rawat acts as a villain/don. And that it is the 568th time that Ab Tak Chappan's plot has been lifted by a Telugu filmmaker and butchered mercilessly until it has no resemblance to the original.

In addition, there are quite a few things you can learn from the movie. Mahankali starts off with a highly informative disclosure - one that the Interpol, Mossad, CIA, KGB and several other intelligence agencies would be quite interested in. A grim voiceover says that Hyderabad's Old City is the base for all the terrorist activities in the world - 7/11, 9/11 and 26/11 included. Interestingly, after this voiceover, there is not a single shot of the Old City in the rest of the movie.

The film then tells us that there are two mafia dons - Naayak, based in Hyderabad, and Arshad (Pradeep Rawat), based in Dubai - who are responsible for all the illegal activities in Hyderabad and the rest of the world. However, throughout the movie, neither of them indulges in any activity other than killing each other's henchmen and escaping from or plotting against Mahankali (Rajasekhar). For some reason, Arshad always talks on the speaker on his phone, with everyone listening in, and uses an age-old Nokia communicator.

Meanwhile, Rajasekhar plays the role of an honest police officer who locks horns with the dons and the Home Minister (Jeeva). The cop saves Tanisha (Madhurima) from an evil, lecherous man, and she promptly falls in love with him.

The rest of the running time of this movie is filled with a hundred rapes, a thousand murders, ten thousand bullets being fired by Rajasekhar and his gang, and a loud and bombastic soundtrack that substitutes for dialogue for nearly 80% of the movie.

Rajasekhar had stated during Mahankali's audio release that the true "Mahankali" is Jeevitha, his wife. Only, Jeevitha turns out to be the destroyer of good. She takes all the possible good out of a cop-mafia don story, and fills it with the worst possible stereotypes, adapting Ab Tak Chappan to "south Indian tastes" (read - item numbers, gory violence and dialogues about magatanam).

The screenplay (written by Rajasekhar) and the direction (by his wife) compete with each other in their listlessness. Also, it is sad to know that it was a woman who had directed all those sadistic rape scenes.

Everyone - everyone - you see in the movie is killed during the film's length, making things pretty pointless. Jeevitha fills nearly half the movie with random shots of a perpetually angry looking Rajasekhar walking around shooting people.

There is some cacophony in the name of music, and the songs play to the gallery, with scantily-clad woman gyrating to some numbers that must have been playing in their head. The action is a one-man show, with Rajasekhar either shooting or beating up whoever crosses his path.

Mahankali is your worst nightmare come true, and then some. Whether you want to see it come true is your choice.
Share. Save. Connect.
Tweet
MAHANKALI SNAPSHOT

ADVERTISEMENT
This page was tagged for
mahankali movie
mahankali movie review
Mahankali telugu movie
Mahankali reviews
release date
Follow @fullhyderabad
Follow fullhyd.com on
About Hyderabad
The Hyderabad Community
Improve fullhyd.com
More
Our Other Local Guides
Our other sites
© Copyright 1999-2009 LRR Technologies (Hyderabad), Pvt Ltd. All rights reserved. fullhyd, fullhyderabad, Welcome To The Neighbourhood are trademarks of LRR Technologies (Hyderabad) Pvt Ltd. The textual, graphic, audio and audiovisual material in this site is protected by copyright law. You may not copy, distribute, or use this material except as necessary for your personal, non-commercial use. Any trademarks are the properties of their respective owners. More on Hyderabad, India. Jobs in Hyderabad.