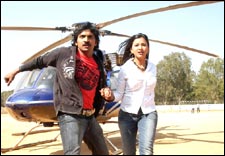 Deepa Garimella / fullhyd.com
EDITOR RATING
3.0
Performances
Script
Music/Soundtrack
Visuals
4.0
2.0
4.0
5.5
Suggestions
Can watch again
No
Good for kids
No
Good for dates
No
Wait to rent it
Yes
The first step towards enjoying Kasko is to skip the first half. That's because nothing much happens before the interval. The second step is to then skip the second half. And those who feel that skipping is never a solution might have a way out as well - by getting someone else to watch it for them, or better still, to skip it for them.

The movie opens with the young and dynamic Vamsi (Vaibhav) going to Hyderabad. In the train, he meets the feisty Mahesh Babu (Brahmanandam), a man on a mission to wipe the city clean of goondas. Little does he know that there's a man with a similar mission - no, not the director of Kasko wanting to wipe the theatre clean of audiences, but Vamsi looking for one particular villain.

The two spend their time outwitting the goons that are part of the most dangerous network in town. After what feels more boring than a collection of 10 back-to-back call-in TV programs on digestive problems, he kidnaps a goon called Alauddin.

This clearly shows that Alauddin has a flashback. So we're taken to Vizag, where Vamsi had fallen in love with an RJ Krishnaveni (Swetha Basu Prasad). She took time to respond, but on the day she was about to propose to him, she was kidnapped. This shows that Krishnaveni had a flashback, too.

It turns out that Krishnaveni had once accidentally pushed to death an eve-teaser who assaulted her. This guy was the son of Warangal's rotten kingpin (Pradeep Rawat). Now everyone knows that it's incredibly tough to bring dead people back. And if they were last spotted in a theatre screening Kasko, it is incredibly stupid to even try. Krishnaveni, however, is being made to do something even more incredible - she has to give birth to the person she killed.

Plus, she's being forced to marry Pradeep Rawat for this - because he felt that though there are many documented ways to give birth to a person, the most sure-shot way is to marry his father. At this point, some members of the audience were found starting fasts-unto-death, demanding a separate state for the writers of Kasko. Some others demanded for everyone to stay united, and continued with the movie - on a watch-unto-death mission.

Kasko's plot moves extremely slowly, and has nothing to offer. The storyline consists of only the basic points that the writers thought up, and hasn't been fleshed out. However, there's a liberal dose of comedy - and we're not talking about the villains making faces trying to look vicious - which sometimes works.

On the performances front, if you want intense emoting and amazing expressions, there's not much on screen - you may want to look at your neighbour in the theatre, instead.

Vaibhav is good but may have done better if there were a few more retakes. Swetha Basu, a youngster capable of good work, seems to have gotten a raw deal - a couple of scenes in which the camera candidly, strategically shows her flesh are what has audiences cheering. The other heroine, Gowri Pandit, seems more focused - she's here for the "glamour", not the brains. Still, the movie is saved by Jayaprakash Reddy and Brahmanandam.

The music isn't much to root for, and nothing that even the music director would probably remember after composing it, leave alone root for it. Visually, the film won't dumbfound you, but it won't blind you either.

All said and done, Kasko won't test your patience - they'll heave it out of the theatres pretty soon.
Share. Save. Connect.
Tweet
KASKO SNAPSHOT

ADVERTISEMENT
This page was tagged for
kasko telugu movie full
kasko telugu full movie
kasko telugu film Wikipedia
Kasko telugu movie
Kasko reviews
Follow @fullhyderabad
Follow fullhyd.com on
About Hyderabad
The Hyderabad Community
Improve fullhyd.com
More
Our Other Local Guides
Our other sites
© Copyright 1999-2009 LRR Technologies (Hyderabad), Pvt Ltd. All rights reserved. fullhyd, fullhyderabad, Welcome To The Neighbourhood are trademarks of LRR Technologies (Hyderabad) Pvt Ltd. The textual, graphic, audio and audiovisual material in this site is protected by copyright law. You may not copy, distribute, or use this material except as necessary for your personal, non-commercial use. Any trademarks are the properties of their respective owners. More on Hyderabad, India. Jobs in Hyderabad.