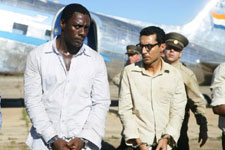 Kritika Deval / fullhyd.com
EDITOR RATING
6.0
Performances
Script
Music/Soundtrack
Visuals
8.5
5.5
9.0
9.0
Suggestions
Can watch again
Yes
Good for kids
Yes
Good for dates
Yes
Wait to rent it
Yes
The life and times of Nelson Mandela as we saw last night at the movies reminds us that capturing great lives is an iffy business, especially if these lives have been political game-changers. These captures tend to be long shots, sweeping across magnificent panoramas of strife, turmoil and greatness; allowing only a rare glimpse or two of the individual moments of triumph or achievement that actually make up the fabric.

Mandela: A Long Walk To Freedom is no different.

While the film is certainly historically faithful and even tries its hand at honesty, beginning as it does with a rousing speech by a young Mr. Mandela (Idris Elba) followed by his adulterous shenanigans, what fails you is the fact that you don't have much of a clue about what is happening and why. They show Mandela and his friends blowing up "white" infrastructure, but there seems to be no motive or plan. There isn't much to establish these youngsters as proponents of peace before they start blowing shit up, except that Mandela says so.

As a matter of fact, this movie is so much about what Mandela says than what Mandela does, that it could easily be a quote book.

Then, there is the fact that you don't really see why Mandela had the cult status he did. There they were, young people blowing things up, and the government puts them away for life. The 25 years of prison-time didn't seem like much of a hardship than what the people he was fighting for were going through.

If you were to go by the movie alone, the man should've been forgotten while he was fighting for pant-wearing rights in prison. In reality, he wasn't, and there's much more to the story which we're sure the makers would've had the time for if they hadn't overindulged on shots of Elba brooding.

Where this movie succeeds brilliantly is with the mood of the nation. The lives of urban Africans shredded by strife, their lives in villages where their every movement is a collective song and dance, the actual songs and dances which make every cell in your body want to sway - they're all captured with a generous, expansive and compassionate vision. That this vision is also slightly inscrutable is a fault that occupies the same space of those above.

So we see the things Mandela goes through, and we see the things his beloved people go through. However, rarely do we get to see what the two went through together, i. e., the reason for the kind of emotional bond that never broke through 25 years of captivity and untold horrors. We're sure there are politics involved along with several other factors, but we don't see any of them.

And that is the pity, for if we had, we are sure it would've been brilliant. With such a brilliant star cast, any political intrigue would've been highly exciting. Elba was sorely underutilised, but his transformation from person to personality as Mr. Mandela ages is unbelievable. Naomi Harris is perfect as Winnie Mandela, whom circumstances have turned into a rather scary sociopath. The rest of the cast gives pitch perfect performances, the role of Mr. Mandela's warden being especially a joy to watch.

It is the music, though, that never lets down. If you could get your hands on the soundtrack, you could play it on loop and trip on it. There is one haunting scene where a woman is heartbroken over the death of her child in a riot, and then a wailing song starts which you are sure is emanating from within her tortured soul.

Despite all the artistry involved, Mandela isn't much more than a eulogy. Reading rather like an Indian school history textbook, it gives you the details from a distance but doesn't invite you into the story. It should be watched, but we're plenty sure you can wait for DVDs.
Share. Save. Connect.
Tweet
MANDELA: LONG WALK TO... SNAPSHOT
MANDELA: LONG WALK TO FREEDOM SNAPSHOT 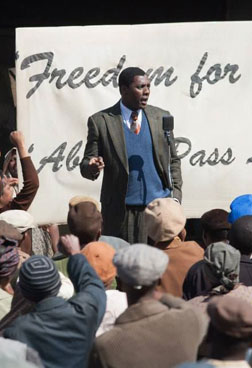 ADVERTISEMENT
This page was tagged for
Mandela: Long Walk To Freedom english movie
Mandela: Long Walk To Freedom reviews
release date
Idris Elba, Naomie Harris
theatres list
Follow @fullhyderabad
Follow fullhyd.com on
About Hyderabad
The Hyderabad Community
Improve fullhyd.com
More
Our Other Local Guides
Our other sites
© Copyright 1999-2009 LRR Technologies (Hyderabad), Pvt Ltd. All rights reserved. fullhyd, fullhyderabad, Welcome To The Neighbourhood are trademarks of LRR Technologies (Hyderabad) Pvt Ltd. The textual, graphic, audio and audiovisual material in this site is protected by copyright law. You may not copy, distribute, or use this material except as necessary for your personal, non-commercial use. Any trademarks are the properties of their respective owners. More on Hyderabad, India. Jobs in Hyderabad.