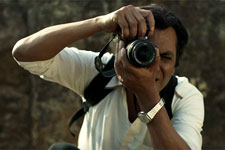 Everything is fleeting, the movie declares, but a photograph is a moment caught in time. The film has no qualms about taking its own sweet time, with the story unfolding at a leisurely pace. It tries to whisk you away to a simpler time, to the Mumbai of old with the city's Campa Cola and single screen theatres.

After a six-year hiatus, and working with Hollywood heavyweights like Robert Redford and Jane Fonda, director Ritesh Batra is back with a film set in India's maximum city, his second after the wonderful The Lunchbox. Batra is a master of making the viewer look at everyday, mundane incidents in a new light, and in the process rendering them ageless, and Photograph is no exception.

Photograph has a story that isn't new or path-breaking, but the treatment is unlike anything else. A chance encounter at the Gateway Of India (how fitting!) thrusts the very plain, middle-class Miloni (Sanya Malhotra) into the world of photographer Rafi (Nawazuddin Siddiqui). Rafi weaves a story about Miloni to put an end to his grandmother's demands on him to get married, which promptly backfires when an excited grandma comes to Mumbai to meet "Noorie" (the name he makes up for her in his tale).

In a surprising twist of fate, Miloni agrees to meet Rafi's grandmother as Noorie, and duo start meeting regularly. A very unique relationship begins, based on a very primal level of trust. The movie takes it own time to explore the nuances of this relationship - the sheltered Miloni slowly starts to express her real feelings and inner dreams, and the subdued Rafi's outlook towards life starts to change.

Photograph is quite literally made to look like a photograph, thanks to the fantastic cinematography of Ben Kutchins (Ozark, Mozart In The Jungle) and Tim Gillis. Batra's fascination with Mumbai is very evident. Despite a fairly heavy Western creative presence (multiple producers, the aforementioned cinematography, editing by John F Lyons and Peter Raeburn's music), it avoids the kind of Western gaze and manages to look authentic, and not foreign.

A lot of work has gone into making Photograph's "understated" vibe. The entire chemistry of the lead pair is based on subtle, but perceivable similarities - neither of the two says much in their daily life. Somehow, despite a vast difference in their social statures, their levels of education and their faiths, Rafi and Miloni find a level of trust that creates a strong bond with the viewer. This doesn't mean that the characters don't have animated moments - Miloni's grotesque fabrication of her (imaginary) parents' death is a darkly funny moment in a film where she can rarely make up such stories. It makes the scenes she shares with the maid Rampyari, where she tries to put forth that she is interested in a person who is closer to Rampyari's station than her own through genuine attempts at small talk, very raw.

The most striking scene from the movie features a surreal cameo appearance by Vijay Raaz, and the film needed more of this magic. Indeed, Photograph's inadequacies too stem from this need for understatement - there are times where the deliberately slow pace makes the viewer impatient. And all the visual detail tends to take away from the narrative at times, especially in the outdoor scenes between Rafi and Miloni which already have a lack of much dialogue.

Photograph is Nawazuddin Siddiqui's second film with Batra, and the veteran actor does a good job of acting with emotions rather than words. Yet, somehow beneath his impressive performance lies an aura of familiarity that takes away from the film. Sanya Malhotra is perhaps given less freedom by the script, yet manages to hold her own alongside Siddiqui as the painfully reserved Miloni.

Farrukh Jaffar as Rafi's grandmother plays the one loud character in the movie, and manages to exert the power her character has over Rafi easily. Miloni's domestic maid Rampyari is played wonderfully by Geetanjali Kulkarni, and her scenes with Miloni almost always bring a smile to your face. Sachin Khedekar and Jim Sarbh aren't really seen much, but they're there.

It is no coincidence that the lead character's name in Photograph is Rafi. Old Hindi film music is an integral part of the film, and even the name given by Rafi to Miloni is "Noorie". The music helps bring a feeling of nostalgia.

Photograph is a slow-moving (sometimes frustratingly so) work of art, an ode to nostalgia. It is devoid of any fast, flashy sequences. It is also ambiguous and leaves a lot to your imagination. That being said, the amount of finesse that has gone into every aspect of the film makes it a visual experience, one that deserves a chance even from the most hardcore of masala movie fans. Hope is a wonderful thing, and Photograph will linger on your mind far longer than the time you will spend in the cinema.
Share. Save. Connect.
Tweet
PHOTOGRAPH SNAPSHOT 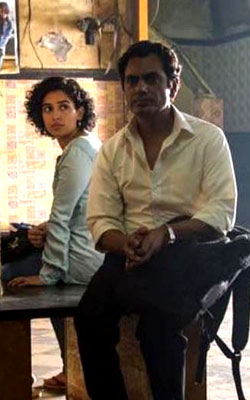 ADVERTISEMENT
This page was tagged for
Photograph hindi movie
Photograph reviews
release date
Nawazuddin Siddiqui, Sanya Malhotra
theatres list
Follow @fullhyderabad
Follow fullhyd.com on
About Hyderabad
The Hyderabad Community
Improve fullhyd.com
More
Our Other Local Guides
Our other sites
© Copyright 1999-2009 LRR Technologies (Hyderabad), Pvt Ltd. All rights reserved. fullhyd, fullhyderabad, Welcome To The Neighbourhood are trademarks of LRR Technologies (Hyderabad) Pvt Ltd. The textual, graphic, audio and audiovisual material in this site is protected by copyright law. You may not copy, distribute, or use this material except as necessary for your personal, non-commercial use. Any trademarks are the properties of their respective owners. More on Hyderabad, India. Jobs in Hyderabad.