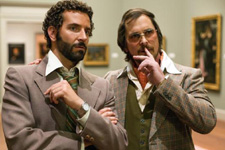 Swayamsrestha Kar / fullhyd.com
EDITOR RATING
8.0
Performances
Script
Music/Soundtrack
Visuals
8.5
7.0
8.0
8.0
Suggestions
Can watch again
Yes
Good for kids
No
Good for dates
Yes
Wait for OTT
No
The '80s were heady times. Sure, they weren't bursting at the seams with psychedelic waves of free love. Instead, they were revelling in dazzling sequins, sparkling wines and a collective penchant for flamboyance. Sure, they weren't the best of times for the American economy. In 1973, the OAPEC declared an oil embargo, and consequently cursed a rapidly burgeoning industrialised nation with a sever fuel crisis which would repeat itself in 1979 during the Iranian revolution.

But there was something about America in the '80s that kept powering its machinery with unflinching persistence. The Great American Dream was blossoming to life in feverish aspirations, and was leading an entire nation of dreamers to newer heights of desperation. New electrical appliances were making their presence felt. Everyday life was gaining momentum, and people were starting to feel that maybe enough was not enough.

David O Russell, director of the enchanting Silver Linings Playbook, and the unforgivably intense The Fighter, places his latest venture in this intoxicating period in history. And in doing so, strikes a special kind of... Swarovski crystal - so much better than boring gold - in the sense that it is more relatable, and is something that you can afford to use, in order to make yourself feel less dowdy and more elegant; in order to assure yourself that there is a chance at a better life, and that you can claw your way to it.

American Hustle is that special kind of film which doesn't surround itself with an aura of unquestionable intellectual or constitutional superiority. It is for everyone (well, not for kids and minors, since it's A-rated), and it doesn't seem to be trying too hard to bag the 10 Oscar nominations that it has already gathered up in its kitty.

The movie, as a line in the beginning informs us, is partly real. It is based on the early 1980s Abscam scandal, in which the FBI collaborated with a con artist called Mel Weinberg to catch politicians in the act of taking bribes.

In the movie, Irving Rosenfeld (Christian Bale) is an aging, balding man who dreams of survival, albeit at a much grander scale than his dry-cleaning business can afford. He embezzles money, and sells fraudulent art pieces on the side.

Sydney Posser (Amy Adams) is a silky sultry creature who abandons her career as a stripper to "re-invent" herself as someone more elegant, and in the paunch-laden person of Irving, she sees her ticket to a different life.

Over Duke Ellington's mesmerising jazz tunes, and dreams of a richer, more fulfilling life, the two of them become partners in crime and in love. Sydney becomes Lady Edith Greensley, the sophisticated snare to trap businessmen and traders who are in desperate need of loans and who are convinced by Irving that he is their monetary lifeline to offshore banks.

But, the hand of law comes down hard on the duo's blissful life of conning and making money, in the form of an excitable and extremely volatile FBI agent called Richard DiMaso (Bradley Cooper). Irving and Sydney a. k. a. Edith are given a proposition - they will be let off if they help Richard corner four more con artists and uncover more white collar crimes.

The three of them target the well-meaning Mayor of Camden, New Jersey, Carmine Polito (Jeremy Renner), who is looking for funding which will enable him to re-build Atlantic City and create more jobs, and who would even make a shady (read "blatantly illegal") deal if it meant he could help his community.

But what starts out as a "sting" operation targeted at one man quickly spirals into an elaborate conspiracy involving the mafia, a deliciously devilish mob boss in the form of Robert De Niro, and tons of fresh green paper.

Back home, Irving's got a wife Rosalyn (Jennifer Lawrence) who is as borderline and bipolar as they come. She switches moods with such alarming suddenness that her husband is often reduced to a helpless mess. To top it all, she is extremely manipulative.

The screenplay is replete with dry humour and taut cinematic moments. The cinematography and the soundtrack merge beautifully to create a cohesive narrative that always seems to be bigger than the sum of its parts.

All these exceedingly intriguing characters are played by actors who are clearly in the top of their form. Christian Bale is suave con artist one moment and vulnerable lover-cum-husband the next. He is menacing at times, and at times, he is a slimy coward. This is one of Bale's best performances so far, and yes, we are aware that he has also played a certain caped crusader in the past.

Remember that simpering princess from Enchanted? Amy Adams makes sure that you don't after watching her performance in American Hustle. She imbibes her character with a variety of fascinating (and at times conflicting) tones - confident, insecure, ethereal, earthy and always riveting. Also, she is so effortlessly sexy and alluring that it feels almost unfair. And Bradley Cooper is brilliant in his portrayal of yet another mentally unhinged man.

But the one who actually chews the scenery every time she's in it is Jennifer Lawrence. At the age of 20-whatever, she's already almost attained Meryl Streep-levels of expertise in her art.

The film might feel long at places, but we can kinda see why they went easy on the chopping off of scenes. There's just too much brilliance here to choose and keep. Trust us on that.
Share. Save. Connect.
Tweet
AMERICAN HUSTLE SNAPSHOT 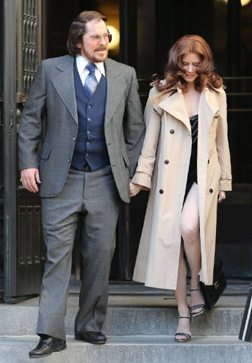 ADVERTISEMENT
This page was tagged for
American Hustle english movie
American Hustle reviews
release date
Christian Bale, Bradley Cooper
theatres list
Follow @fullhyderabad
Follow fullhyd.com on
About Hyderabad
The Hyderabad Community
Improve fullhyd.com
More
Our Other Local Guides
Our other sites
© Copyright 1999-2009 LRR Technologies (Hyderabad), Pvt Ltd. All rights reserved. fullhyd, fullhyderabad, Welcome To The Neighbourhood are trademarks of LRR Technologies (Hyderabad) Pvt Ltd. The textual, graphic, audio and audiovisual material in this site is protected by copyright law. You may not copy, distribute, or use this material except as necessary for your personal, non-commercial use. Any trademarks are the properties of their respective owners. More on Hyderabad, India. Jobs in Hyderabad.