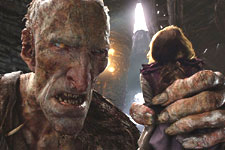 Kritika Deval / fullhyd.com
EDITOR RATING
5.0
Performances
Script
Music/Soundtrack
Visuals
6.0
4.0
5.0
6.5
Suggestions
Can watch again
No
Good for kids
Yes
Good for dates
No
Wait to rent it
Yes
Within the first half hour of Jack The Giant Slayer's beginning, you have a friar being interrogated and being asked to "spill the beans", because, you know, they're trying to get the magic beans from him. Well, this is just one of the many moments in Jack The Giant Slayer when you laugh because you don't know what else to do.

The recent crop (yeah, we just did that) of fairytale-adaptations just barely even try going beyond the formula, all the while pretending give us a new perspective on tales that fed our childhood. Jack The Giant Slayer, though, is honest. It is all about a boy and his adventure, saving the princess, a happy ending, and, most of all, GIANTS!

Yeah, that's exactly what this movie's about - these ginormagantuan children of computer graphics who were relegated to folklore-ish heights during folklore-ish times for ill behaviour. However, it is a fairy tale, evil does not stay hidden for long, and we must have great danger.

Why, you ask? To turn a formerly spirited and independent heroine (Eleanor Tomlinson) into, if not a snivelling wreck, then at least one noticeably devoid of the characteristics that make her remarkable. How else is a hero as lukewarm as Jack (Nicholas Hoult) supposed to save the day?

Of course, there are the wonderfully ugly giants to slay, and beanstalks to climb and traitors to the throne to be stopped. And thus, we come to the utterly ridiculous "plot".

Princess Isabelle is engaged to be married to the eeeevul Lord Roderick (Stanley Tucci), who has an ancient crown and some magic beans which would enable him to take over an ancient race of giants and, with their "help", the rest of the world.

While Lord Roderick waited, for some unfathomable reason, to marry the princess, a monk steals the beans and gives these super-dangerous stairways to evil to Jack the farm boy in exchange for a horse, with a dire warning against getting them wet (looks like instant consumables aren't a 21st century thing - "Chaos in a pouch. Just add water.").

Jack's uncle throws them away, and while Jack picks them up, one of them slips through the cracks in the wooden shack they lived in. Meanwhile, Princess, who is running away from marriage to a meanie twice her age, comes across Jack's shack, and takes shelter from a storm. Witty banter between cute royal and cute commoner ensues, until it is all ripped asunder by a beanstalk that grows out right through Jack's home.

Princess goes up with the tree, and it's upto Jack to bring her back, and stop the giants from taking over the world. Wait a second. What happened to the eeeevul Lord Roderick? Who really cares? All you're gonna be thinking is, "Dear God, We're extremely sorry for having depleted the world's resources of face cream. Whatever it is that these giants did, it can't be worth living with skin like that. Sincerely, Cutting down on face cream consumption."

And then there are the puns! One of the king's soldiers says to Jack when he suspects Jack of wanting to go up the beanstalk to impress the Princess - "You're barking up the wrong beanstalk." The. Wrong. Beanstalk.

As you may have guessed, the biggest letdowns are the haywire plot and the dialogue that seems like it's written by college interns. On weed, no less. What props up the film is the graphics, of course, which aren't quite spectacular, but are still a treat to watch, especially the beanstalks. For a kiddy fantasy flick, the music barely makes its presence felt.

The acting by all is uniformly good, which is not so much an asset as a waste of resources.

All in all, Jack The Giant Slayer is a pretty fun watch if you don't have anything else to do. Don't bother shelling out 3D fares, or, worse, IMAX fares for this one. Meanwhile, look "Jack And The Beanstalk" up on Wikipedia for the real tale.
Share. Save. Connect.
Tweet
JACK THE GIANT SLAYER... SNAPSHOT
JACK THE GIANT SLAYER (3D) SNAPSHOT 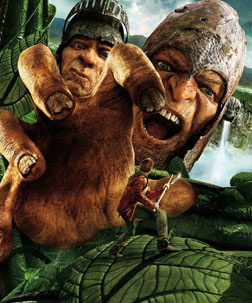 ADVERTISEMENT
This page was tagged for
jack the giant slayer full movie
Jack The Giant Slayer (3D) english movie
Jack The Giant Slayer (3D) reviews
release date
Nicholas Hoult, Eleanor Tomlinson
Follow @fullhyderabad
Follow fullhyd.com on
About Hyderabad
The Hyderabad Community
Improve fullhyd.com
More
Our Other Local Guides
Our other sites
© Copyright 1999-2009 LRR Technologies (Hyderabad), Pvt Ltd. All rights reserved. fullhyd, fullhyderabad, Welcome To The Neighbourhood are trademarks of LRR Technologies (Hyderabad) Pvt Ltd. The textual, graphic, audio and audiovisual material in this site is protected by copyright law. You may not copy, distribute, or use this material except as necessary for your personal, non-commercial use. Any trademarks are the properties of their respective owners. More on Hyderabad, India. Jobs in Hyderabad.