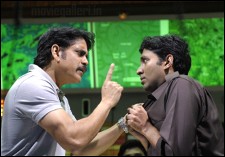 Deepa Garimella / fullhyd.com
EDITOR RATING
6.5
Performances
Script
Music/Soundtrack
Visuals
9.0
6.5
7.0
7.5
Suggestions
Can watch again
Yes
Good for kids
Yes
Good for dates
Yes
Wait for OTT
No
It's not often that you see a hijack drama being played out on Telugu screens. It's even less often that you see an A-list Telugu star like Nagarjuna associating himself so closely with offbeat cinema of any kind (Allu Arjun in Vedam, and Venkatesh in Eenadu being the last such instance). Either way, Gaganam is a breakthrough as far as its intent is concerned.

The content is not exactly perfect - in fact, as the movie initially unfolds, you're nervous because things look like they'll fall apart any moment. That, however, doesn't stop your nods of appreciation - largely because things never really do fall apart; they just seem fragile.

For example, while the film's terrorists insanely scream at the passengers to announce their hijack mission, threatening to reduce this flick to a loud chaotic farce, the day is saved because in the next scene, Prakash Raj is channeling his histrionic energy in a role that lends the film much of its personality and grace (he plays a suave IAS officer caught in the midst of frustrating politico-civil pressures).

It's a rather uncomplicated plot, actually. A bunch of Pakistani terrorists hijacks a Chennai-Delhi flight, forcing an emergency landing at Tirupati. They want the release of a dangerous terrorist, and while the ordeal that the hostages (and the hostages' families) are going through is palpable to the whole nation, election-conscious politicians in Delhi pore over the emergency in endless fruitless meetings.

An NSG commando Ravi (Nagarjuna) stands by as IAS officers camped at the Tirupati airport puzzle over what to do next, and is rendered helpless for the most part. He barks at them about how insane an idea it is to even consider releasing a terrorist to catch whom several lives had been lost; but eventually, babudom overtakes sanity.

The makers took their story-telling quite seriously, and it shows. The hostages' trauma is well-conveyed without resorting to using the terrorists' violence as a prop. The action gets better in the second half of the flick, with the last few minutes gathering a lot of momentum.

And yes, Nagarjuna is an integral part of the Gaganam experience. Despite starring in a rather simple and, well, sedentary role, it's nice to see his star power being used in a film that has more dignity than gimmickry. Prakash Raj shines, too. Poonam Kaur doesn't have much to do, and Sri Lakshmi is quite good.

Then, while Gaganam is a rather absorbing watch, it has quite a few areas that seem in need of help. Though it was a good idea to have brought in little touches like the saintly Christian priest (and, as we mentioned, the Pakistani family), evidently for their emotional potential, they tend to fall flat in the face of poorly-written dialogues and bad timing.

Also, some interesting facets haven't been explored fully - including the whole news channel bit featuring Harshavardhan, that could have been a stirring commentary on TRP-obsessed journalists who don't give a crap about national security.

As a thriller, Gaganam could have been more taut and engaging. Still, for those who might just end up bored, Brahmanadam's appearance evokes sighs (actually, shrieks) of relief. His comic track dangerously veers on trivializing the sensitive drama on hand, but is a value-add to the film, no less. There's a fun spoof on superstars and commercial cinema as well, that draws quite a few chuckles.

The cinematography is classy, and the visuals well-made. And the soundtrack keeps in tune with the no-nonsense nature of the storytelling.

Uncluttered, brief (with a runtime of about 2 hours) and edgy - if that's all you'd like out of your Telugu movie this weekend, head for Gaganam.
Share. Save. Connect.
Tweet
GAGANAM SNAPSHOT


the fate: predictable movie since many of such movies have been seen.


evidence: there are definite proofs to show that this movie is different. the various evidences include the near 100% screenplay with perfect narration. secondly the direction of the movie. right from the title flying with, in the sky showing the map of india, with the introduction to various characters is perfect and the viewers are caught well with it, thirdly is the cinematography and the camera work done inside a hijacked plane. good movement of the camera along with subtitles at required stages gives a grip. fourthly is the change in screenplay from serious mood to a soothing humorous mood.
verdict: very good.


Pros: screenplay and cast performance
Cons: lack of gripping score and some abrupt editing
RATING
8
rishi578 on 12th Feb 2011, 6:46pm | Permalink
What a film Three cheers for Entire crew Its a answer to every one who criticize telugu cinemas.Eat ur words.These comments are directed to Full hyd also

ADVERTISEMENT
This page was tagged for
Gaganam telugu movie
Gaganam reviews
release date
Akkineni Nagarjuna, Prakash Raj
theatres list
Follow @fullhyderabad
Follow fullhyd.com on
About Hyderabad
The Hyderabad Community
Improve fullhyd.com
More
Our Other Local Guides
Our other sites
© Copyright 1999-2009 LRR Technologies (Hyderabad), Pvt Ltd. All rights reserved. fullhyd, fullhyderabad, Welcome To The Neighbourhood are trademarks of LRR Technologies (Hyderabad) Pvt Ltd. The textual, graphic, audio and audiovisual material in this site is protected by copyright law. You may not copy, distribute, or use this material except as necessary for your personal, non-commercial use. Any trademarks are the properties of their respective owners. More on Hyderabad, India. Jobs in Hyderabad.