Harry Potter And The Goblet Of Fire Review 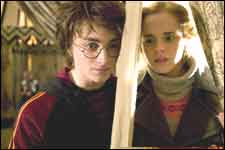 Priyanka Pulla / fullhyd.com
EDITOR RATING
8.0
Performances
Script
Music/Soundtrack
Visuals
NA
NA
NA
NA
Suggestions
Can watch again
NA
Good for kids
NA
Good for dates
NA
Wait to rent it
NA
Harry Potter And The Goblet Of Fire is the first climacteric of the series – the adolescence, the puberty. And it is not just Harry, Hermione and Ron we are talking about. Everything ages, ripens and blossoms into a full-bodied indulgence, rather than a naïve fantasy.

The pristine prettiness of the earlier flicks makes way for more pleasurable, distinctly adult pursuits. Colorful caricatures give way to the real McCoy. Harry's voice has cracked, he has a prominent musculature, and there is more unapologetic darkness and dreadfulness beyond the walls of the magic school. There are nymphets, there is death, and most of all, there is the demoniac Lord Voldemort.

Part of the hype of Harry Potter comes from the fact that it is so hyped. When you are sitting with a bunch of eager schoolgirls naming characters in advance, and squealing when there is a giant aerial shot of the Quidditch World Cup stadium, you are already sold.

The Goblet does well in catering to this hype. It has all the ingredients. The Quidditch World Cup we spoke about, a tri-wizard tournament with grisly challenges and the shuddersome rendezvous with a Voldemort (Ralph Fiennes) who is more hollow-eyed and sepulchral even than the resurrected Imhotep in The Mummy.

Each of these ingredients is blown to full-capacity with some fantastic CGI effects. There is just a passing shot of the Quidditch tournament, but what a shot. A titanic stadium with piles upon mountainous piles of stalls, teeming over precariously with cheering fans. A quick, swooping, rushed close-up and you spot our very own Hermione in the millions. Here is when you take a deep breath and relax because you know with a delicious anticipation what they are going to do with the rest of the story. They are going to swell it up king-size!

The Tri-Wizard Tournament is the focus of this story – it brings together three schools of magic. The Durmstrang school has beefy men with staffs, military crew cuts and Slavic fur-collared great-coats. The Beuxbatons, on the other hand, are shapely and slender sylphs in capes and tunics, who go around blowing kisses when applauded, in sharp feminine contrast to the Durmstrangs. The Hogwarts, of course, are the androgynous lot, but they are getting there. Yes, they are certainly getting there!

Count the Christmas ball in The Goblet as one of the highlights. It is a full-fledged prom night with Hermione in a pink satin gown, being led by Viktor Krum of Durmstrang. Harry has been turned down reluctantly by Cho Chang (Katie Leung), his fast blossoming crush, and is here with one of the Patil sisters. Ron is with the other. And as the ball progresses, they do everything from gentle waltzing to jiving to heavy metal. Hermione and Viktor dance with moony eyes staring into each other. It is literally the most magical ball you will ever witness. And it is overflowing with syrupy romance, a welcome-first for Harry Potter.

Well, Harry is accidentally chosen by the goblet for the Tri-Wizard, even though he has not applied. Alastor Mad Eye Moody (Brendan Gleeson), the new professor for Defense Against Dark Arts, has an eyeball that turns around 360 degrees to spy on everyone, and is helping out Potter through every stage of the contest.

Each challenge in the tournament is an all-out visual and sensory adventure in itself. Harry battles a grisly and scaly Hungarian dragon, with his ingenuity and some help from well-wishers. Then there are the hideous underwater hellions that clutch on his friends as he tries to rescue them. And finally there is the maze that takes them to meet the dark lord himself.

The entire 2-1/2-hour ride has a sunless, somber, ethereal tint. And you are completely absorbed, moving from one bewitchment to another. Potter is with you but he is trying to find his way as much as you are, and as he goes through his boarding school life. With the girls, the crushes, the proms and much more, this story becomes less of a children's-day-out treat. Plus, it has introduced the weightier issues of life – death, for one. It's all just a tantalizing peek, like a lacy underskirt showing under a dress, but still voluminous enough not to miss.

Nope. Happily, Harry is not for children at all anymore. He has well and truly crossed over to our side. The Goblet Of Fire was a rather graceful and fitting entry. Welcome Mr. Potter.
Share. Save. Connect.
Tweet
HARRY POTTER AND THE... SNAPSHOT
HARRY POTTER AND THE GOBLET OF FIRE SNAPSHOT

See Harry Potter And The Goblet Of Fire full details
HARRY POTTER AND THE... USER REVIEWS
HARRY POTTER AND THE GOBLET OF FIRE USER REVIEWS
1 - 3 OF 3 COMMENTS
POSITIVE  |  NEGATIVE |  NEWEST  |  OLDEST  |  MOST HELPFUL  |  LEAST HELPFUL
USER RATING
8.1
70 USERS
Performances
Script
Music/Soundtrack
Visuals
NA
NA
NA
NA
Can watch again - NA
Good for kids - NA
Good for dates - NA
Wait to rent it - NA
Emily Curlin on 23rd Mar 2006, 11:32pm | Permalink
I did not like this movie because it did not have enough sirius black which I am heartbroken and besides they are just gonna kill sirius black off in the next flim so whats the use to watch this movie again. Personally this is the wrose harry potter flim yet.
RATING
2
Harry Potter on 28th Nov 2005, 6:14pm | Permalink
A real 'wow' at the IMAX. This onez the best of all the potter's movies. dont miss if u are a potter fan
RATING
8
Rahul on 20th Nov 2005, 2:38pm | Permalink
The switch to dark side was made in Prisoner of Azkaban, but comments aside - this movie is a definite must in in IMAX. Everything about the story has evolved. Its still frustrating why the wizards are not figuring out that EVERYTHING truly does revolve around Harry! Without Harry, the wizard world would be rather boring place to be in. Bottomline: Weakest book, but a honorable movie. A-
RATING
8
LEAVE A COMMENT
fullhyd.com has 700,000+ monthly visits. Tell Hyderabad what you feel about Harry Potter And The Goblet Of Fire!
MORE MOVIES
Latest Reviews
Red (Telugu)
Master (Tamil)
Master - 2021
Krack
12 O Clock
more
Solo Brathuke So Better
Bloodshot
Angrezi Medium
Baaghi 3
Palasa 1978
Sonic The Hedgehog
Kanulu Kanulanu Dhochaayante
Thappad
HIT
Kannum Kannum Kollaiyadithaa...
Contemporary Reviews
V For Vendetta
The Devil Wears Prada
Poseidon
Something Special
Kitha Kithalu
more
Chup Chup Ke
Maa Tujhe Salaam
Tom Dick And Harry
Khatron Ke Khiladi
Fahrenheit 9/11
Alag
Notebook
Narasimha Reddy
Pothuraju
Random Reviews
Charlies Angels (English)
Ek Raat Mere Saath
How to Lose a Guy in Ten Day...
Spiderman 2 (Telugu)
Black Friday
more
Drona
Avatar (Telugu)
7 Khoon Maaf
Journey 2: The Mysterious Is...
Saare Jahaan Se Mehnga
Paranthe Wali Gali
The Hobbit: The Battle Of Th...
Batman v Superman: Dawn of J...
Mahanubhavudu
Hellboy (2019)
SEARCH MOVIES
Dissatisfied with the results? Report a problem or error, or add a listing.
ADVERTISEMENT
SHOUTBOX!
{{todo.name}}
{{todo.date}}
[
ip{{todo.ip}}
]
{{ todo.summary }}... expand »
{{ todo.text }} « collapse
First  |  Prev  |   1   2  3  {{current_page-1}}  {{current_page}}  {{current_page+1}}  {{last_page-2}}  {{last_page-1}}  {{last_page}}   |  Next  |  Last
{{todos[0].name}}

ADVERTISEMENT
This page was tagged for
Harry Potter And The Goblet Of Fire english movie
Harry Potter And The Goblet Of Fire reviews
release date
Daniel Radcliffe, Emma Watson
theatres list
Follow @fullhyderabad
Follow fullhyd.com on
About Hyderabad
The Hyderabad Community
Improve fullhyd.com
More
Our Other Local Guides
Our other sites
© Copyright 1999-2009 LRR Technologies (Hyderabad), Pvt Ltd. All rights reserved. fullhyd, fullhyderabad, Welcome To The Neighbourhood are trademarks of LRR Technologies (Hyderabad) Pvt Ltd. The textual, graphic, audio and audiovisual material in this site is protected by copyright law. You may not copy, distribute, or use this material except as necessary for your personal, non-commercial use. Any trademarks are the properties of their respective owners. More on Hyderabad, India. Jobs in Hyderabad.