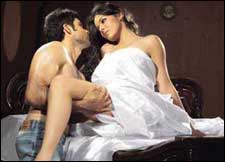 Ghazala Rizvi / fullhyd.com
EDITOR RATING
5.0
Performances
Script
Music/Soundtrack
Visuals
NA
NA
NA
NA
Suggestions
Can watch again
NA
Good for kids
NA
Good for dates
NA
Wait for OTT
NA
Zeher would be exactly what is high on your thoughts as you manage a hasty retreat from the theater. Director Mohit Suri brews up a half-strung tale, disappointing even those who came absolutely for the half-clad Udita Goswami. Steeped in azure seas of scenic Goa, the movie is not expected to leave its mark on the sands of time.

Siddhartha Mehra (Emran Hashmi) is one angry cop, blasting and shooting people at some randomly self-designed schedule that has nothing to do with the story. His wife, Sonia, is a woman of substance - more precisely one who can’t make up her mind: should she forge her career in the police-force or sport an apron in the house?

In the ensuing dilemma, Sonia ends up killing her unborn child to have a better balance of equation with her husband. She goes back to being a policewoman, while Siddhartha skids down a step further towards his final undoing.

Anna (Udita Goswami), the local drug-peddler’s wife, offers him a pleasant escape from the barometer. Siddhartha starts spending loads of his time with her. Wish he could have done the same with his wife - it would have saved us the ache of watching him act sad and sensuous, and only managing a nonsensical look.

Sean, the drug-peddler, has a single objective in life. It needs full-time dedication, too. Wife-bashing is hard work, especially when the wife is someone like Anna who looks like a million bucks. Anna finally cooks up a cancer and a pregnancy, and manages to squeeze big money from Siddhartha.

Siddhartha, who had sneaked the money kept in his custody to Anna, is caught unbalanced when Anna and Sean turn up charred in their own home. With Sonia deputed as the officer-in-charge, it is tough times for Siddhartha. He now doubles up as an evidence-destroying and clue-clinching flincher.

The plot thins further as now it appears that both Anna and Sean are alive, and it was Sean who used Anna as a prop to get the money. Or was it Anna who used Sean as bait? Though I took the bait, and was reeled inside the theater, I couldn’t keep up with the miscarried rigmarole. And probably, so couldn't the makers.
Share. Save. Connect.
Tweet
ZEHER SNAPSHOT

ADVERTISEMENT
This page was tagged for
zeher movie hot images
Zeher
Zeher hindi movie
Zeher reviews
release date
Follow @fullhyderabad
Follow fullhyd.com on
About Hyderabad
The Hyderabad Community
Improve fullhyd.com
More
Our Other Local Guides
Our other sites
© Copyright 1999-2009 LRR Technologies (Hyderabad), Pvt Ltd. All rights reserved. fullhyd, fullhyderabad, Welcome To The Neighbourhood are trademarks of LRR Technologies (Hyderabad) Pvt Ltd. The textual, graphic, audio and audiovisual material in this site is protected by copyright law. You may not copy, distribute, or use this material except as necessary for your personal, non-commercial use. Any trademarks are the properties of their respective owners. More on Hyderabad, India. Jobs in Hyderabad.