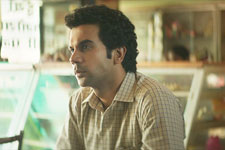 T J Reddy / fullhyd.com
EDITOR RATING
8.0
Performances
Script
Music/Soundtrack
Visuals
9.0
9.0
7.0
7.0
Suggestions
Can watch again
Yes
Good for kids
Yes
Good for dates
No
Wait for OTT
No
One of the lesser-known facts about me (which I am wholly proud of) is that I managed to secure a perfect 100 in Social Studies in my 10th standard exams. My affinity for the workings of the world past and present was palpable from a young age. One of the most seminal debates I had with my peers and teachers was about how democracy became ubiquitously accepted as the way of the free world. The primary hang-up in my young mind was I could not be easily convinced that dictatorships, monarchies, communism, socialism etc. fell by the wayside en route to accepting democracy as the law of the land.

During one of these debates, one of my teachers once uttered a statement that punctuated her argument to a tee and has rung true with me since. It went: "Democracy is the only system of governing that remained after all other options were deemed futile by the citizens being governed." Such an apt argument that was when truly deconstructed. While I can't go into her justifications in detail, the deftness of her words made me question my socio-political beliefs to their minutia, which is something I do to the present day.

So when I saw Nutan Kumar (Rajkummar Rao) being slyly admonished by his teacher for his strict adherence to the government's principles, I was in equal parts amused and intrigued. Nutan Kumar (who retitles himself Newton Kumar) is a simple servant of India's government, lost in the massive expanse of Chattisgarh, trying to perform his duty to perfection without ever paying heed to the social implications, or lack of thereof, of his line of work.

Kumar is assigned the task of procuring votes for the Lok Sabha election from the citizens of two remote villages tucked away in the Maoist/Communist insurgent jungles of Chattisgarh. The magic number of voters Newton, his team and the CRPF protecting them are after is 76 - a number of people whose opinions would not qualify to be even a blip on the radar of the world's largest democracy. However, with undeterred resolve and bolstered by a police chief with an ulterior motive (of being interviewed by a foreign journalist), Kumar traverses the harsh bullet-studded landscapes, sets up a polling booth in a dilapidated school, and patiently waits till 3 in the PM for the registered voters of the community as CRPF officer Aatma (Pankaj Tripathi) and his battalion subtly advise them against it with unflappable fervour.

Cinema has a way of making the truly expansive seem conceivable and the wholly insignificant seem magniloquent - the artists who conceive of these scenarios while painstakingly etching them on screen need commendation on a job done well, even if it is on a small scale. The movie Newton draws parallels with its main character in more ways than one. While I'd wholly encourage most readers to watch the movie for themselves and apply their thoughts onto it, a base level of symbolism the film carries with it is as follows.

The film and its lead are consummate underdogs who are punching above their weight in a world devoid of time or patience for their idealistic world views. While there is a small number of folks who support their steadfast work at being umpires and keeping the standards high, most of us bought tickets to watch the batsmen smash sixes and the bowlers demolish some timber. This sentiment, while cause for humour through the film's runtime, still works as painful reminder of the lack of patience the population at large has for people like Newton as the final scene comes to the fore. Newton's long-lost acquaintance commending him on his award for punctuality while simultaneously being miffed that he insists on working the last 5 minutes of his shift accurately paints a picture of the contradictions we put ourselves through on a daily basis when dealing with government employees, pop-culture or otherwise.

Carrying electronic voting machines, the sanctity of democracy and this film on his seemingly frail shoulders is the spell-binding Rajkummar Rao. As I've mentioned before, Rao and critics' darling Pankaj Tripathi have long since exhausted my vocabulary of superlatives with their grounded performances which tug at the audience's heartstrings while never forgetting to keep them entertained with a unique concoction of humour and earnestness.

Absorbing the lush green and near metronomic ambience a jungle exudes are the supporting cast of characters whose distinct personalities, ranging from officials with apathy for the locals to polling booth employees who amuse each other with stories of the Ramayana, never take away from the quirky nature of the film but only add to its sensibilities.

A film like Newton makes itself a hard-sell for a mass audience. Despite never abandoning its subtlety or light tone, its portrayal of how people in power are too busy keeping themselves there to ever truly care about the plight of a nation or its people while people with an idealistic worldview lack the nuanced articulation required to truly mend the minds of a disenfranchised population, cannot help but disturb.

Indeed, the movie's sobering themes, its portrayal of apathy for the state of the Indian democracy, and the reckless insensitivity portrayed for the plight of the brave men and women of the CRPF brigade and the downtrodden folk of the Adivasi community all act as stark reminders of the privileged existence most of us city folk lead. Even as our 24-hour news channels indignantly scream about the loss of lives of innocent jawans or the state of panic citizens find themselves in as their basic human rights are trampled upon, the unshakable feeling that there are only a few members of society who are truly capable of facilitating change becomes wholly apparent. A change that requires generations to materialise because the men and women who truly care about and are capable of facilitating it are few and far between, and in a country of over a billion people, their work requires time to percolate.
Share. Save. Connect.
Tweet
NEWTON SNAPSHOT 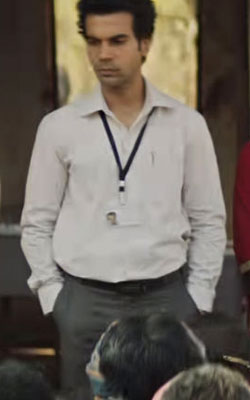 See Newton full details
NEWTON USER REVIEWS
1 - 1 OF 1 COMMENTS
POSITIVE  |  NEGATIVE |  NEWEST  |  OLDEST  |  MOST HELPFUL  |  LEAST HELPFUL
Josh on 24th Sep 2017, 10:21pm | Permalink
The couple behind kept flashing the phone torch on the Frankie/roll they were eating. The family next to me kept discussing Pvt Ltd companies and partnership companies. A lot sniggered at trivial things and there is the ubiquitous ringing mobile.

So many people who turned because it's the official Oscar entry this year. They were disappointed. This isn't Lagaan of course.

I was happy that the film is making money. And I was sad that the viewing experience had to be so devoid of integrity.
TJ Reddy on 25th Sep 2017, 11:50am | Permalink
Honestly speaking I am quite happy that this is the official entry for the Oscars. I am not a huge fan of Laggan myself because I find it too saccharine and last year's Visaranai is just a tad too sad.

This reminds me of the good old days when K. Vishwanath movies were being nominated as official Oscar entries. Subtle movies about serious topics which don't take themselves too seriously or trivialize the subject they discuss.Good stuff!

I had a great viewing experience. Everyone slid into the film very easily and watched it with the integrity of a film festival bunch.
Josh on 26th Sep 2017, 1:15am | Permalink
Visaaranai is quite a personal film for me. I liked Newton but I wouldn't compare it with Visaaranai at all. I just dug out this letter I wrote to my friend (now wife) after I walked out of Visaaranai. It does well to show what the film means to me.

Dear []-
It is funny how my possibly-first love letter to you will feature very little of either you or me. It will feature a film instead; and a disturbing utterly unromantic film at that. Visaaranai, of course. How that would qualify as a love letter is perhaps not so obvious. However, when you think of how I got shaken by the film and how I'm kinda dying to talk about it to someone, you'll perhaps find the fog clearing a bit.

I'm not going to do a review. I have already read Baradwaj Rangan's review and a bunch of other reviewers have already lifted it up to the skies. I don't think I want to do a review as much as just talk about these thoughts in my head regarding the film.

You're possibly already aware of the film being based on framing defenseless innocent people for the crimes that they have nothing to do with. The police can't solve these cases and thus catch hold of these random people, torture them till they agree to
TJ Reddy on 26th Sep 2017, 7:11am | Permalink
Dude all the movie stuff aside.. I'm so glad you married this wonderful woman!! It's so rare to find a relationship where you can express so much about each other with thoughts about the most menial (to the world) things.. im absolutely floored. no more arguments from my end when something is so special to a person.
Josh on 26th Sep 2017, 11:56am | Permalink
Ha-ha.. thanks, man. I'm myself glad that I married someone who has the patience for my rambling.
The Common Movie Goer on 25th Sep 2017, 3:51pm | Permalink
Lagaan is saccharine? How can you say that, TJ? Did you forget that Rachel Shelley leaves the town with a broken heart, never to see Aamir Khan again? There is no such thing as an overly happy ending. Hero wins, heroine wins, villain dies a brutal and gruesome death, and all is right with the world again! Unless it's an SRK movie, where the hero dies a noble death for sentimental reasons.
TJ Reddy on 25th Sep 2017, 3:56pm | Permalink
TCMG!! it's my very unpopular opinion.. I've given it more than a few chances.. I know it's good but it falls slightly short of great for me..
LEAVE A COMMENT
fullhyd.com has 700,000+ monthly visits. Tell Hyderabad what you feel about Newton!
MORE MOVIES
Latest Reviews
Jayeshbhai Jordaar
Sarkaru Vaari Paata
Doctor Strange In The Multiv...
Ashoka Vanamlo Arjuna Kalyan...
Runway 34
more
Heropanti 2
Acharya
Kanmani Rambo Khatija
Jersey (Hindi)
K.G.F. Chapter 2
Beast (Telugu)
Ghani
Fantastic Beasts: The Secret...
The Contractor
The Lost City
Contemporary Reviews
Kingsman: The Golden Circle
Kingsman: The Golden Circle ...
Spyder
Mahanubhavudu
Judwaa 2
more
American Made
Chef
Bhoomi
Jai Lava Kusa
Simran
It
Poster Boys
Daddy (Hindi)
Meda Meeda Abbayi
Random Reviews
Meet The Parents
Ansh
Mumbai Se Aaya Mera Dost
Bhadradri Ramudu
Sarkar
more
Idiot
Bhagyalakshmi Bumper Draw
Three
Pyaar Impossible
2011 World Invasion: Battle ...
Love Failure
3G Love
Hasee Toh Phasee
Majili
Fantastic Beasts: The Secret...
SEARCH MOVIES
Dissatisfied with the results? Report a problem or error, or add a listing.
ADVERTISEMENT
SHOUTBOX!
{{todo.name}}
{{todo.date}}
[
ip{{todo.ip}}
]
{{ todo.summary }}... expand »
{{ todo.text }} « collapse
First  |  Prev  |   1   2  3  {{current_page-1}}  {{current_page}}  {{current_page+1}}  {{last_page-2}}  {{last_page-1}}  {{last_page}}   |  Next  |  Last
{{todos[0].name}}

ADVERTISEMENT
This page was tagged for
the newton movie in hindi
Newton hindi movie
Newton reviews
release date
Rajkummar Rao, Pankaj Tripathi
Follow @fullhyderabad
Follow fullhyd.com on
About Hyderabad
The Hyderabad Community
Improve fullhyd.com
More
Our Other Local Guides
Our other sites
© Copyright 1999-2009 LRR Technologies (Hyderabad), Pvt Ltd. All rights reserved. fullhyd, fullhyderabad, Welcome To The Neighbourhood are trademarks of LRR Technologies (Hyderabad) Pvt Ltd. The textual, graphic, audio and audiovisual material in this site is protected by copyright law. You may not copy, distribute, or use this material except as necessary for your personal, non-commercial use. Any trademarks are the properties of their respective owners. More on Hyderabad, India. Jobs in Hyderabad.