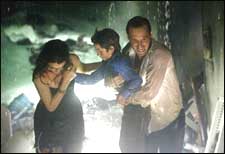 Making a remake, theoretically, shouldn't be tough. After all, the story's already there. All you have to do is spice it up with some spectacular special effects and compelling characters, and ideally, you should end up with a blockbuster.

But Poseidon doesn't achieve any of this. Throughout the movie, you wish for some improvement in the storyline. And if not that, then at least a tenable way to flounder. But all you are served is a slipshod, desultory flick. This remake of the 1972 "The Poseidon Adventure" comes across as a sordid cross between Titanic and Deep Blue Sea - minus the sharks, of course. But we think the sharks could have saved the movie from sinking of its own weight.

Right from the outset, everyone in the audience already knows the story. It's the classic (and terribly clichéd) man versus natural calamity drama, and how he - in this case, ten people - manage to pull through the fiasco.

An ocean liner called Poseidon is overturned by a behemothic wave, and the passengers (who were enjoying a New Year's Eve party) are now strewn all over the ceiling. In spite of Captain Bradford's (Andre Braugher) assurances that help is on its way, a defiant bunch of people, decide to find their way out by, literally, climbing up to the bottom of the ship.

The leader of the rat pack is Dylan Johns (Josh Lucas), a professional gambler. He runs into a single mom Maggie James (Jacinda Barrett) and her son Conor(Jimmy Bennett), and they instantly hit it off.

The group also has the squabbling family of Robert Ramsey (Kurt Russell), his daughter Jennifer (Emmy Rossum) and her fiance Christian (Mike Vogel). Robert is the wary dad (and ex-mayor of NY and also a former fire-fighter), who doesn't exactly approve of his daughter's choice in men, but along with a couple of skeletons in his closet, has to live with it.

The suicidal, gay Richard Nelson (Richard Dreyfus) character seems to have been added as an afterthought, in the wake of the success of homosexual-themed movies in the recent past. Clubbed along with a waiter and a female stowaway, this pretty much rounds up the junta of assorted escapees.

The disaster strikes barely fifteen minutes into the film, and so there's hardly any time to lay the groundwork for the characters' lives. While Nelson reaching out to a hapless stowaway and consoling her might pique a momentary spurt of emotion, the primary hoopla of the film lies not in evoking emotions, but in attempting to keep you at the edge of your seats.

The rest of the movie deals with the gang escaping the numerous deathtraps that the ship unceasingly hurls at them. The route to freedom has never been easy, and Poseidon attempts to depict this as candidly as possible.

But while the initial visual magnanimity of the glorious ship might make you gape in awe for a couple of moments, the film quickly maroons itself at a relatively low intellectual level.

Going by the past, this one's is a sure contender for HBO's 2007 New Year's Eve double bill slot. We suggest you catch this one then. 'Coz that's all it's worth.
Share. Save. Connect.
Tweet
POSEIDON SNAPSHOT

ADVERTISEMENT
This page was tagged for
Poseidon english movie
Poseidon reviews
release date
Josh Lucas, Kurt Russell
theatres list
Follow @fullhyderabad
Follow fullhyd.com on
About Hyderabad
The Hyderabad Community
Improve fullhyd.com
More
Our Other Local Guides
Our other sites
© Copyright 1999-2009 LRR Technologies (Hyderabad), Pvt Ltd. All rights reserved. fullhyd, fullhyderabad, Welcome To The Neighbourhood are trademarks of LRR Technologies (Hyderabad) Pvt Ltd. The textual, graphic, audio and audiovisual material in this site is protected by copyright law. You may not copy, distribute, or use this material except as necessary for your personal, non-commercial use. Any trademarks are the properties of their respective owners. More on Hyderabad, India. Jobs in Hyderabad.