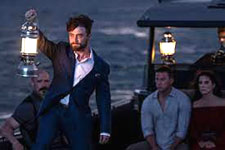 Punarvasu Pendse / fullhyd.com
EDITOR RATING
6.0
Performances
Script
Music/Soundtrack
Visuals
7.0
4.0
7.0
6.0
Suggestions
Can watch again
Yes
Good for kids
Yes
Good for dates
Yes
Wait for OTT
No
The Lost City, much like Uncharted that also released in 2022, aims to bring back the magic of much-loved past movies. If Uncharted was inspired by Indiana Jones, The Lost City definitely takes a healthy amount of inspiration from the 1980s classic Romancing The Stone.

Director duo Adam and Aaron Nee present an air-headed caper that makes no pretenses about what it is - they're here to entertain. And we're all for it. We just wish the stakes were a little bit higher, because the film completely manages to surprise us at one point. Unfortunately, that's it, exactly that once.

Loretta Sage (Sandra Bullock) is a middle-aged writer of popular romantic adventure novels which star a character called Dash McMahon that is portrayed by cover model Alan Caprison (Channing Tatum). Made to go on a publishing tour by her publisher, Beth Hatten (Da'Vine Joy Randolph), the reluctant and reclusive Loretta has to endure the public popularity of Dash.

A meeting with eccentric millionaire Abigail Fairfax (Daniel Radcliffe) leaves Loretta stranded on a faraway island in the Atlantic. Alan, aiming to emulate the bravery of his fictional alter-ego Dash, hires Jack Trainer (Brad Pitt), an ex-Navy SEAL and CIA agent, to go to the island and free Loretta.

The Lost City is the kind of movie whose jokes you can see from a mile away. Scratch that - you can pretty much predict its entire plot. There is nothing new or inventive here, but it is precisely this comfort and familiarity that the makers aim to use to draw you in, and they are fairly successful at it. Much like one of Loretta's own pulpy romance adventure novels, the charm is in its feel-good, happy-ending endorphin release.

Couple that with the very fun chemistry between its leads, and the able supporting cast, and The Lost City is the exact kind of romp people love to go to theatres for. Sandra Bullock is fantastic as Loretta Sage, and she is extremely comfortable doing the whole "dropping the tough guy act and embracing her inner strength" bit that she has been doing phenomenally since the turn of the millennium.

Channing Tatum is unafraid to look ridiculous - he is comfortable in his skin, and it shows. Daniel Radcliffe's character is a bit off, because he isn't the familiar big bad until the very end, which takes away from the comfortable familiarity that we talked about. Brad Pitt has a very fun, action-packed cameo appearance. Patti Harrison, with her absurd zoomer humour as Loretta's new social media manager, is also worthy of a mention.

Pinar Toprak's score has thumping tracks that are perfectly in tune with the loud, in-your-face vibe the movie has. It also has melodic arrangements, such as an original track Lagrimas Sin Fin (feat. Cecilia Noel) that is a nice soft accompaniment to the movie's more emotional moments.

The Lost City is a fun-filled adventure that is solidly entertaining without offering anything new. At the same time, it is the kind of self-aware film that has a scene where Alan chides Loretta for looking down upon the genre of books she publishes, which we also think is a subtle way to engage with the audience willing them to give the movie a fair go. You should!
Share. Save. Connect.
Tweet
THE LOST CITY SNAPSHOT 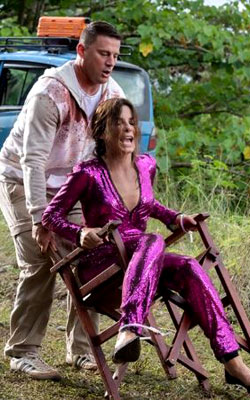 ADVERTISEMENT
This page was tagged for
The Lost City english movie
The Lost City reviews
release date
Sandra Bullock, Channing Tatum
theatres list
Follow @fullhyderabad
Follow fullhyd.com on
About Hyderabad
The Hyderabad Community
Improve fullhyd.com
More
Our Other Local Guides
Our other sites
© Copyright 1999-2009 LRR Technologies (Hyderabad), Pvt Ltd. All rights reserved. fullhyd, fullhyderabad, Welcome To The Neighbourhood are trademarks of LRR Technologies (Hyderabad) Pvt Ltd. The textual, graphic, audio and audiovisual material in this site is protected by copyright law. You may not copy, distribute, or use this material except as necessary for your personal, non-commercial use. Any trademarks are the properties of their respective owners. More on Hyderabad, India. Jobs in Hyderabad.