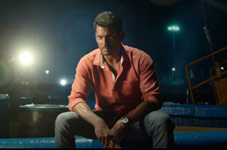 Ravi Kandala / fullhyd.com
EDITOR RATING
5.0
Performances
Script
Music/Soundtrack
Visuals
6.0
5.0
5.0
6.0
Suggestions
Can watch again
No
Good for kids
No
Good for dates
Yes
Wait for OTT
No
When we reviewed one of Vishal's previous movies, titled Jayasurya, here is what we wrote:

"By the time Jayasurya ends, you'll actually feel sad for Vishal's entrapment. Because the second half of Jayasurya is quite nice. Nice enough to make you wonder what may have been if the first half hadn't been in Pandem Kodi mode (random comedy - loving family - terrible love story)."

We can just change "Jayasurya" to "Kathakali" in the above paragraph, and it would hold absolutely true. Kathakali has such a terrible first hour, you start looking around for something to throw at the screen, or at least at yourself. The missteps in this hour include a completely unwarranted introduction-type song, a family reunion with everyone showering extra love on the hero, comedy that barely evokes a chuckle, a love track with barely any passion or chemistry between the leads, and a mandatory drinking scene which suffocates you.

At the end of this tedious hour, a body turns up, our hero is blamed, and the plot begins to thicken. The movie begins to engross the audiences and keeps them glued for the next hour. So here's the plot overview - Kamal (Vishal) returns to Kakinada from California to get married. Three days before the wedding, Samba (Madhusudhan), a big goon in the district, gets murdered. The finger of suspicion points towards Kamal and his brother. From shopping for his wedding, Kamal suddenly finds that he is the target of Samba's brothers and the police. He is then left with less than 24 hours to try and find out who killed Samba to save himself and his marriage.

Kathakali has an interesting beginning. The villains are given major heft and fancy introductions all through the title roll while the hero is nowhere to be seen. The hero's introduction is very simple in contrast - just a joyride in a cab from the airport to his village. Things then slide downward rapidly from the moment Catherine Tresa steps in. The girl clearly thinks acting is either flashing a dazzling smile or frowning until the pancake on the face begins to break. The love story, which plays out to a "can it get any sillier" theme, is flavorless.

But when the procedural begins for the whodunit, you are left wondering if a background into all the suspects would've set up the movie better. You also start asking yourself if any of the other suspects, all of whom had motives, had the means to bump Samba off as well. If only Vishal could do away with the generic parts of the scripts he's picking up.

Vishal acts the part - he does not have to do anything different from what he's done so far, and so he's fairly at home. The rest of the supporting cast do quite well, too. They are all relatively unknown faces, and that helps - you do not really know a face that you can conclude to be the villain. The production values are decent and the dubbing is fairly good. There is also quite some effort into using Telugu nameboards, and the Tamil flavor is neutralized to a large extent. There are two songs which are functional, but the background score leaves an impact.

You can sit through this one provided you completely ignore the first 45 minutes or so. Else, just wait until next week when Nagarjuna hits the screens with his classy new film.
Share. Save. Connect.
Tweet
KATHAKALI SNAPSHOT 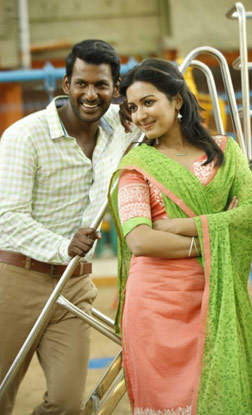 ADVERTISEMENT
This page was tagged for
vishal full telugu movie kathakali
Kathakali telugu movie
Kathakali reviews
release date
Vishal, Catherine Tresa
Follow @fullhyderabad
Follow fullhyd.com on
About Hyderabad
The Hyderabad Community
Improve fullhyd.com
More
Our Other Local Guides
Our other sites
© Copyright 1999-2009 LRR Technologies (Hyderabad), Pvt Ltd. All rights reserved. fullhyd, fullhyderabad, Welcome To The Neighbourhood are trademarks of LRR Technologies (Hyderabad) Pvt Ltd. The textual, graphic, audio and audiovisual material in this site is protected by copyright law. You may not copy, distribute, or use this material except as necessary for your personal, non-commercial use. Any trademarks are the properties of their respective owners. More on Hyderabad, India. Jobs in Hyderabad.