All The Money In The World Review 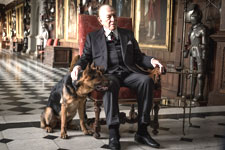 T J Reddy / fullhyd.com
EDITOR RATING
6.0
Performances
Script
Music/Soundtrack
Visuals
7.0
6.0
5.0
7.0
Suggestions
Can watch again
No
Good for kids
No
Good for dates
No
Wait for OTT
No
If there is one thing movies teach you about negotiating with terrorists, it is to avoid negotiating with them - as we all know, the logic is that giving in to any demands will lead to and encourage many other acts. J Paul Getty (Christopher Plummer) may have been one of the first high-profile champions of this style of thinking.

In All The Money In The World, J Paul Getty III (Charlie Plummer), the grandson of American oil tycoon and the richest man in the history of the world until that point in time J Paul Getty, is abducted in Italy by a band of local goons. In exchange for the safe return of the boy, the hoodlums ask for $17 million in ransom. This piece of news percolates through the world in record time. Terrified mother Gail Harris (Michelle Williams) works at amassing the ransom money at a feverish pace, ex-CIA agent Fletcher Chase (Mark Wahlberg) aids her by using his deep-rooted contacts to unearth both the criminals and the boy, but the man with "all the money in the world" chooses not to pay up.

J Paul Getty is quite the fascinating individual. He is a billionaire who installs payphones in his mansion (for his guests) and does his own laundry because the latter is tax-deductible and also because he despises wasting a single penny of his hard-earned wealth. He was a man obsessed with finding the right price for every commodity and service, and that includes his grandson. Watching him operate is a joy.

J Paul Getty III clearly testifies in his opening narration that his family looks like you and I do but are not like us. Their modes of operation are sometimes beyond our comprehension, and this window into a world most of us are rarely a part of is what makes this movie compelling for a good portion of its runtime.

But, just like earning copious amounts of money, it basically boils down to extended periods of hard work followed by a few moments of elation when all your work leads to said wealth filling your pockets. Plummer's portrayal of the eccentric billionaire is the treat we as an audience get for relatively slogging through the sans-Getty portions of the movie - the film's pace suffers drastically once the inciting incident makes its way off-screen.

Indeed, Scott and this movie's version of J Paul Getty share a great deal in common. They are both world-weary men who are hailed as geniuses for their inimitable style and body of work. They are masters at isolating and solving problems while keeping their stock in the public eye at a high. Hence Scott's style of storytelling works to enhance Plummer's Getty.

But Getty's and by association Scott's flaws bleed into the movie itself and not in a good way. Instead of being a poignant character study of a flawed man like that of Daniel Plainview, whose flaws drive the story forward, Getty's story seems constantly inconvenienced by the myriad of lesser men and women in his vicinity. This still makes for entertaining viewing but not memorable viewing. What should have been a tightly-constructed 90-minute character-driven crime drama expands to being a 133-minute poorly-paced piece of cinema which could serve as a lesson to any future moviemakers on the importance of knowing your strengths and editing your movie down to the essential.

The primary strength of the movie is Christopher Plummer's towering, central performance. He is magnetic in every frame and this is doubly impressive when you realize that he had shot all his scenes in just 10 days. Ridley Scott once said that his style of direction involved isolating a problem, finding a solution for the problem and moving ahead with his work as diligently as an ant would. In that vein, he dusts the scandal involving the originally proposed lead Kevin Spacey off his shoulder and gives the audience and his movie a virtuoso performance by a compelling veteran actor.

Old man Plummer's co-stars Michelle Williams, Mark Wahlberg and Charlie Plummer are fine actors in their own right and do deliver serviceable performances, but their characters are clearly a few levels below the enigmatic J Paul Getty when it comes to being full-fledged.

Also, the fact that the movie's writer David Scarpa took some creative licence and changed real-life incidents in an effort to infuse his story with drama only works to the movie's detriment. As the film winds down, you are both left unsatisfied with the resolution the movie presents and flabbergasted at the unearned character growth some of the characters receive. Try as they might, the A-list talent embodying the secondary characters can rarely infuse their tepidly written dramatic scenes with personality or a sense of depth.

The score accompanying the wacky fictional adventures is as uninspired as the fictional adventures themselves. While the movie uses The Rolling Stones' Wild Horses and the Italian version of Its A Man's World aptly, something which is bound to bring a smile out of even the most crusty of viewers, there is a sense of hollowness to it all. There is a version of this film where the scenes coupled with these songs are powerful and tightly constructed, but this is not that version. Add to that the gorgeous yet detached style of moviemaking Scott employs, and you are left with a story that fails to engage you after all the hoopla dies down.
Share. Save. Connect.
Tweet
ALL THE MONEY IN... SNAPSHOT
ALL THE MONEY IN THE WORLD SNAPSHOT 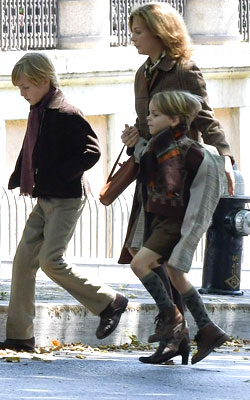 ADVERTISEMENT
This page was tagged for
All The Money In The World english movie
All The Money In The World reviews
release date
Michelle Williams, Christopher Plummer
theatres list
Follow @fullhyderabad
Follow fullhyd.com on
About Hyderabad
The Hyderabad Community
Improve fullhyd.com
More
Our Other Local Guides
Our other sites
© Copyright 1999-2009 LRR Technologies (Hyderabad), Pvt Ltd. All rights reserved. fullhyd, fullhyderabad, Welcome To The Neighbourhood are trademarks of LRR Technologies (Hyderabad) Pvt Ltd. The textual, graphic, audio and audiovisual material in this site is protected by copyright law. You may not copy, distribute, or use this material except as necessary for your personal, non-commercial use. Any trademarks are the properties of their respective owners. More on Hyderabad, India. Jobs in Hyderabad.