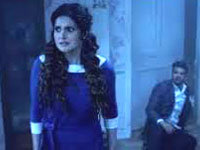 Daphne Rose / fullhyd.com
EDITOR RATING
6.5
Performances
Script
Music/Soundtrack
Visuals
6.5
6.0
7.5
6.5
Suggestions
Can watch again
Yes
Good for kids
No
Good for dates
Yes
Wait for OTT
No
With the fourth installment in his 1920 series, Director Vikram Bhatt hits his stride again. He successfully delivers yet another horror movie packaged for the umpteenth time as a gothic musical but which surprisingly does not borrow any part of its storyline from its predecessors in the series.

With his previous three outings diligently named 1920, 1920 Evil Returns and 1920 London, the director seems to have finally decided to turn the calendar over for his fourth, calling it 1921. But his flair, or lack of it, for naming his movies notwithstanding, you have got to be grateful that, unlike a lot of Indian movies of this genre, at least 1921 has some semblance of a story to back it up.

So, 1921 starts off with Karan Kundra of "Gumrah" fame playing Ayush, an Indian pianist with prodigious talent at the keys who, thanks to a kind benefactor, finds himself moored in the haunting beauty of north England where he's been sent to attend music school. Only, the joke's on him here as it's his turn to be "gumrah-ed" by shrill voices, white lights, messages written in blood on the wall and footsteps that patter along the floor of the ginormous mansion he's been charged with taking care of in exchange for paying tuition.

With nary a prayer of help in sight, he accidentally stumbles across Anglo-Indian Rose, played by a very fetching Zarine Khan, who to his luck happens to be a ghost-whisperer just waiting to be discovered by this strapping Punjab-da-munda fresh off the boat. Together the couple tries to unlock the mystery behind the haunting, all the while battling an illness that's slowly but surely taking over Ayush's body.

What work in 1921's favour are its storyline and performances. For anyone who enjoys the gothic genre, the movie, while stopping short of being a treat, is a satisfactory little escape into another world and time. The cobblestoned beauty of York is beautifully captured, the moors look decidely haunted, and the umpteen doors and windows of the great mansion are used to great effect in conveying the horror, of which there truly are some good moments. With most of the movie's runtime devoted to just the two characters, Khan and Kundra make ample use of the opportunity, Khan more so, to convey the predicament they're in even if the film fails to support them in the effort sometimes.

Mention must be made of the dialogues and music, too, though the songs on more than one occasion are an unnecessary addition to the plot (think of it as watching a Formula 1 race where the drivers have to stop at a traffic light that pops out of nowhere on the circuit). Also, while piano instrumentals would've probably made the best sense considering the lead actor's background in the movie, having the piano segue into guitar riffs as the actors break out into song is rather jarring. That said, the music is beautiful - only, it would've been to the movie's benefit had it been limited to creating promotional pieces.

The core issues that hold 1921 back from being a landmark movie are the movie's pace (the film could seriously do with at least a half hour being trimmed off of it to make the proceedings tighter) and the make-up. There are many "ghosts" in the film which do not look remotely scary thanks to some really atrocious make-up. One actually looks like Uncle Itt from the Addams family, only with its hair dyed black and with about as much terror factor as a Great Dane wearing a wig. So, while you're scared at the sounds and in the anticipation of what would happen next, the moment the ghosts pop on screen, pfft.

There's also the styling. Right from the lead actor to the heroine's best friend to the extras, they are styled with about as much authenticity as a high school play group trying to recreate the 1920s for a school project. Lost opportunity, that.

Simply put, watch this one if you absolutely must. No FOMO here, though.
Share. Save. Connect.
Tweet
1921 SNAPSHOT 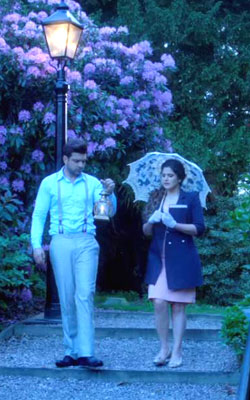 ADVERTISEMENT
This page was tagged for
1921 in hindi movie
1921 hindi movie
1921 reviews
release date
Zarine Khan, Karan Kundra
Follow @fullhyderabad
Follow fullhyd.com on
About Hyderabad
The Hyderabad Community
Improve fullhyd.com
More
Our Other Local Guides
Our other sites
© Copyright 1999-2009 LRR Technologies (Hyderabad), Pvt Ltd. All rights reserved. fullhyd, fullhyderabad, Welcome To The Neighbourhood are trademarks of LRR Technologies (Hyderabad) Pvt Ltd. The textual, graphic, audio and audiovisual material in this site is protected by copyright law. You may not copy, distribute, or use this material except as necessary for your personal, non-commercial use. Any trademarks are the properties of their respective owners. More on Hyderabad, India. Jobs in Hyderabad.