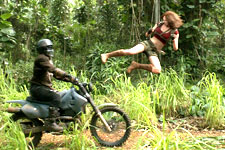 T J Reddy / fullhyd.com
EDITOR RATING
6.0
Performances
Script
Music/Soundtrack
Visuals
7.0
5.0
5.0
6.0
Suggestions
Can watch again
Yes
Good for kids
Yes
Good for dates
Yes
Wait for OTT
No
Now this is the kind of movie you're looking for when you know The Rock is leading the line. Short, loud, silly, and most importantly, fun.

Jumanji: Welcome To The Jungle's primary story is concisely explained by its trailer. Four high-school students Spencer (Alex Wolff), Bethany (Madison Iseman), Anthony "Fridge" (Ser'Darius Blaine) and Martha (Morgan Turner) are sentenced to detention on a fateful evening. While they are busy serving their sentence, the film is hard at work trying to add character to them to make them seem like an updated version of The Breakfast Club.

Quickly, however, an ominous drumming sound attracts their attention to a video game console. The console has a cartridge of Jumanji attached to it, and as soon as they plug it to an old-timey CRT TV (that still inexplicably works), the teens are sucked into the world of the game, and are assigned characters from the game with specific powers attached to each of them. Spencer turns into Dr Smolder Bravestone (Dwayne Johnson), Bethany becomes Professor Sheldon Oberon (Jack Black), Fridge finds himself being Franklin Finbar (Kevin Hart) and Martha has morphed to Ruby Roundhouse (Karen Gillan).

The NPCs of the game task them with a planateers-esque mission where, by combining their unique powers at the right times, the fearsome foursome can lift the curse that has been plaguing the land of Jumanji.

If Hollywood had an antidote that could wash the horrible aftertaste Baywatch left in the mouths of audiences everywhere, it would look and sound like Jumanji. Because unlike Baywatch, this film has a plot that you can follow with characters you can relate to. Even if the traits given to said characters are as two-dimensional as the classic Nintendo graphics from times past, they work well with the strengths of the actors portraying them. The script itself is like the game. Know your strengths, avoid your weaknesses, know the number of chances the audiences are ready to give when you throw bullsh*t at them, and for the love of God, don't overdo the bullsh*t because three strikes and GAME OVER are all basic tenets the film follows.

The one-line blurb for a movie like this would be the overused "This film knows what it is". It knows it is a fun movie for you to enjoy over the holidays (in between complaining about the new Star Wars film), and by God, it will fulfil its destiny.

But being popcorn fun comes at an expense for both the movie and the audience watching it. The film has a distinct lack of logical storytelling. As an example, apart from suggesting that the foursome can leave the game world after finishing their task, the movie has the many rules of the game console itself glossed over just to get the plot in motion. The game sucking in a solitary player at one instance to it not starting unless four players are present in another is just the beginning of the many plot holes it leaves behind while The Rock and Co mow down one-dimensional bad guys with ease.

Speaking of The Great One, it is this kind of performances and roles that have become his MO. Using his enviable charm, athleticism and a very self-deprecating sense of humour to great effect, the man makes himself a joy to watch on screen. The fact that he is a video game character who has no weaknesses means that all his inhuman physicality seems plausible instead of impossible.

At the opposite end of the spectrum is Jack Black who uses his physicality to induce laughter in one of better recent roles that do not involve him voicing a panda. Karen Gillan is adequate as the action heroine Ruby Roundhouse even though the movie very occasionally offers her spellbinding moments to shine in.

This likeable trio offsets Kevin Hart's shtick as his overbearing comedy seems more bearable when he is a part of a group. Nick Jonas and Bobby Cannavale have little to chew on in terms of scenery, and are mostly relegated to being puppets who fill in some time-tested archetypes.

The young actors, however, do not have the luxury of having The Most Electrifying Man In All Of Entertainment by their side. Their performances and comic timing are slightly off which leaves the scenes featuring them falling flat.

Also flat are the movie's visuals. While it does have a few funny edits and mid-shots, the world of the game itself is nothing to write home about. Unlike Scott Pilgrim vs The World that used 8-bit animation to great effect or Tron: Legacy that put modern triple-A gaming grammar to good use, Jumanji finds itself looking no different than a run-of-the-mill action adventure. It comes off as a movie that was shot very competently in a jungle and not much else. And the generic score whose job it is to underscore the plot beats is not of much help to the cause here, either.

But you are unlikley to be distracted by all that mediocrity for too long because the film itself rarely offers any breathing room. It moves from point to point with either the grace of a gazelle or by destroying all obstacles in its path like an elephant. It weaves in a few moments of character development for its leads in the second act to offset any melodrama as it knows that is not what its audiences would come to see. We go in to see dumb action, silly comedy and an inconspicuous yet tasteful tribute to the late great Robin Williams. The People's Champ and his film deliver on all fronts.
Share. Save. Connect.
Tweet
JUMANJI: WELCOME TO THE... SNAPSHOT
JUMANJI: WELCOME TO THE JUNGLE (HINDI) SNAPSHOT 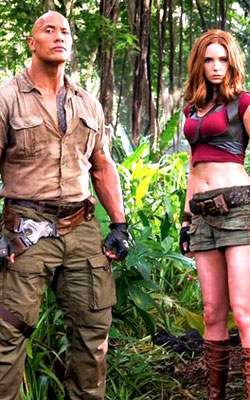