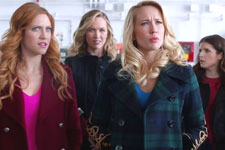 Daphne Rose / fullhyd.com
EDITOR RATING
7.5
Performances
Script
Music/Soundtrack
Visuals
8.0
6.0
7.5
6.5
Suggestions
Can watch again
Yes
Good for kids
Yes
Good for dates
Yes
Wait for OTT
No
The A ca-Bellas are back for their swansong in a blitzkrieg of events that makes sure even the most hard-hearted of viewers has something to smile about in this madcap musi-comedy of a bunch of girls who, basically, just excel at making music with their mouths.

Five years ago when Pitch Perfect came out, the world was ready to write off this story of a college singing group, unimaginatively called the "Barden Bellas" (the girls of Barden college, geddit?), as yet another chick flick that would run its three weeks at a cinema near you before making a silent exit into nameless obscurity.

No one even remotely thought that that it would set the cash registers ringing loud enough to spawn a trilogy and propel its pint-sized lead Anna Kendrick, who also happens to be a Broadway star and a Tony award nominee by the way, to international stardom.

Pitch Perfect 3 takes off three years after where the first movie left us (was the three for three intentional? we'll never know). By now, Beca (Kendrick) is a much-harassed music producer trying to "produce" some very disinterested participants, Chloe (Brittany Snow) is trying hard to worm her way into vet school, and Fat Amy (Rebel Wilson) is being, well, Fat Amy.

Long story short, the girls are discovering that life ain't as rosy as they thought it would be out in the real world, and each of them, without exception, longs to go back to the simpler days of winning world championships in making mouth music. And so, in an effort to reunite them and get them to do what they do best, former team President Aubrey (Anna Camp) secures for them a spot in the cross-country USO tour where they face off with "Calamity" personified (a jaw-droppingly stunning Ruby Rose) for a much-coveted chance to open for DJ Khaled at the tour, and discover, much to their chagrin, that even their vanilla cuteness is of no use here.

Pitch Perfect 3 scores with its rock-solid performances and a fantastic editor who keeps the proceedings moving without letting you catch a breath. Where it fails, however, is in the lack of a rock-solid storyline that keeps you invested in the story all through. The plots in the story have been built around jokes and not vice versa, with way too much packed into what is just an hour and a half long movie.

So while you have a montage of sequences that involve a romance (wafer-thin but made redeemable only through the casting of Matt Lanter, he-of-the-gorgeous-eyes), an oddball comedy, a thriller (the best sequence of the lot) and an inner conflict that are all individually funny, the movie never does bring them together in a satisfying enough fashion. Also, for a film that's based on the premise of music, the songs in this installment are few and far between (do watch out for the Bellas' rendition of Britney Spears' Toxic, though).

So should you be watching this movie? Hell yes. It might not make it to any red carpet functions this year, but it sure will give you your money's worth of entertainment. And isn't that all we truly want at the end of the day?

P. S. Also, Fat Amy should henceforth be made a compulsory guest star in all movies by law.
Share. Save. Connect.
Tweet
PITCH PERFECT 3 SNAPSHOT 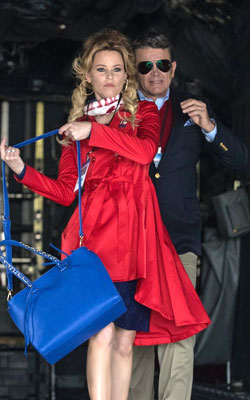 ADVERTISEMENT
This page was tagged for
Pitch Perfect 3 english movie
Pitch Perfect 3 reviews
release date
Anna Kendrick, Rebel Wilson
theatres list
Follow @fullhyderabad
Follow fullhyd.com on
About Hyderabad
The Hyderabad Community
Improve fullhyd.com
More
Our Other Local Guides
Our other sites
© Copyright 1999-2009 LRR Technologies (Hyderabad), Pvt Ltd. All rights reserved. fullhyd, fullhyderabad, Welcome To The Neighbourhood are trademarks of LRR Technologies (Hyderabad) Pvt Ltd. The textual, graphic, audio and audiovisual material in this site is protected by copyright law. You may not copy, distribute, or use this material except as necessary for your personal, non-commercial use. Any trademarks are the properties of their respective owners. More on Hyderabad, India. Jobs in Hyderabad.