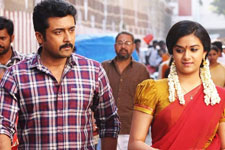 Josh / fullhyd.com
EDITOR RATING
6.0
Performances
Script
Music/Soundtrack
Visuals
7.0
6.0
7.0
8.0
Suggestions
Can watch again
No
Good for kids
Yes
Good for dates
Yes
Wait to rent it
No
Night before the show.

Spouse: Ah, cool. Which one?

S: Surya? Been a while since I watched a film of his. Last time I watched him...

J: He was speaking Tamil I presume.

Gang is a comic heist film remade from Neeraj Pandey's Akshay Kumar starrer Special 26. Set in the 1980s, the film features a con gang (Surya, Ramyakrishna, Senthil, Dancemaster Sivasankar and Sathyan) pretending to be CBI and going about raiding black money holders, and a nice cat-and-mouse game between the real CBI and the masqueraders. While Pandey's film with Akshay Kumar sticks to the workings of a heist film where the performances and twists get the film to sail through, director Vignesh Shivn's Gang takes the primary idea and adds popu (thalimpu / tadka / thaalithal / oggarane - that sizzling artifact of Indian coooking) to make it a masala entertainer.

The result of such an exercise is you have a film which is less about the story and more about the swag. That is not a problem at all - Surya is really the embodiment of energy and charm when he needs to be. He can make you laugh, he can make you cry, he can make you dance, and he can sell illogical scenes without having you ask why.

What he can't do, however, is speak Telugu.

A film that survives on its lead's swag can't afford to have him bumbling with his lines, and yet that's what you see every time Surya has to utter any lengthy line. The diction is simply unnerving. If a guy in the Telugu-speaking states were to speak like that there's every chance he'd be ridiculed so bad that he'd be plunged into self-doubt for a lifetime. And here, in Gang, we have the hero moving agilely, standing stiff like a wall, smiling like a winner, and passionately mispronouncing his lines.

The general dubbing scene sometimes makes it difficult to process what was being said, and often a joke flickers in your mind like that tubelight in grandpa's house before it finally lights up. It's all very fine in grandpa's house where we have little to do but chill with thatha, but in this film you have a joke round the corner all the time. It's a laugh riot where the rioters appear to be in slow-motion.

But there are other, more structural, problems with Gang, and not just with the dubbed version. Vignesh Shivn underwrites it. This reviewer is reminded of some wisdom a senior once imparted to him with respect to drawing and art in general: "Do not hurry. Take your time after you think you're finished and observe your work. Things will pop up which could be done better. These are the so-called finishing touches which if you attend to will elevate your piece to a whole different level of satisfaction." Shivn apparently didn't have that senior or he forgot these golden words. Gang is relentlessly entertaining but falls short of making you feel like a puppy after belly rubs.

But hey, what do we care? We get to laugh. Surya's cheer is rather infectious. Keerthy Suresh is the loveliest heroine we've seen in a saree in a while. Anirudh goes for a killing (that 'chitike' song in the beginning is a massy joy to behold). Shivn knows exactly how to do tongue-in-cheek humour. Sreekar Prasad knows how to bait you with the cheeky twists. Yesteryear hero Karthik, RJ Balaji (with apt dubbing from Priyadarshi Pulikonda), Thambi Ramaiah, Senthil and a bunch of other reliable actors do more than collecting paycheques.

Also, there's Brahmanandam for a brief scene. He doesn't do much aside from being present. For some of us, that'll still do.

And can we revive those Ramyakrishna fans associations please? This glorious lady has so much fun playing the con-artist/homemaker with the same efficiency as the fierce and firm Sivagami. It'd be such a pity to waste this talent on mothering heroes when she could quite effectively school them on how to be smashing stars. 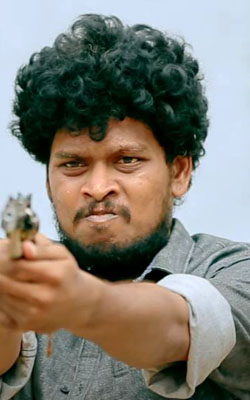 ADVERTISEMENT
This page was tagged for
Surya CBI movie
Gang (Telugu) telugu movie
Gang (Telugu) reviews
release date
Suriya Sivakumar, Keerthy Suresh
Follow @fullhyderabad
Follow fullhyd.com on
About Hyderabad
The Hyderabad Community
Improve fullhyd.com
More
Our Other Local Guides
Our other sites
© Copyright 1999-2009 LRR Technologies (Hyderabad), Pvt Ltd. All rights reserved. fullhyd, fullhyderabad, Welcome To The Neighbourhood are trademarks of LRR Technologies (Hyderabad) Pvt Ltd. The textual, graphic, audio and audiovisual material in this site is protected by copyright law. You may not copy, distribute, or use this material except as necessary for your personal, non-commercial use. Any trademarks are the properties of their respective owners. More on Hyderabad, India. Jobs in Hyderabad.