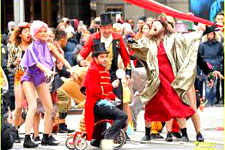 T J Reddy / fullhyd.com
EDITOR RATING
5.0
Performances
Script
Music/Soundtrack
Visuals
5.0
4.0
6.0
7.0
Suggestions
Can watch again
No
Good for kids
Yes
Good for dates
Yes
Wait to rent it
Yes
One of the less-reported "sad things" that happened in 2017 was the closure of the Ringling Bros And Barnum & Bailey Circus. This was an American institution for 146 years and served as the inspiration for many big top circuses the world over. While animals being pulled away from the circus was one of the reasons for this unfortunate event, the primary reason for this antiquated format to go out of business was the lack of innovation and ingenuity. Cirque du Soleil came in like a whirlwind with its high production values and death-defying performers and captured the imagination of people the world over.

P T Barnum, one of the masterminds behind the former, would have been disappointed to see his brainchild die such an uneventful death. Coincidentally, a film based on his initial days as a promoter hit the screens this weekend. Can the film do what the modern iteration of his circus didn't, and be well and truly spellbinding and innovative?

The Greatest Showman is the musical-comedy-drama that attempts to capture the life and times of Phineas Taylor Barnum (Hugh Jackman). He states that his primary desire is to provide a life filled with only the finest of things the world has to offer for his wife Charity (Michelle Williams) and two daughters. However, a deep inner goal of his has always been to be accepted by the community of elites inhabiting New York City. Being a man of humble upbringing leaves him an outlier to the said upper echelon of society. In a moment of inspiration, Barnum enlists the aid of society's true outcasts, the physically deformed and racially downtrodden, and masterminds the P T Barnum Circus in the hopes of vaulting himself and his family to the lives he believes they deserve.

A story of empowering the impoverished is as old as time and plays well to audiences of most walks of life because of the distinct gap in society we see on a nearly daily basis. Most, if not all, in the audience, identify with the goals of either the performers in Barnum's circus or with Barnum himself. We all try to make the best possible lives for ourselves while we work through our flaws be they physical or psychological, and when a narrative on those lines comes with a singing, dancing and charming Hugh Jackman, it makes the journey all the more enticing.

While the endless stream of positivity-filled music and likeable cast of characters makes for some good times at the cinema, the narrative offers little in terms of originality when it comes to exploring the age-old storyline. This is the textbook definition of filmmaking for beats instead of storytelling with actual emotional value. One would think that a film with sub-plots exploring every negative facet of society ranging from racism to sexism and classism and much more would give more than just a passing glance to each of those unique issues. Too many concerns being addressed within a very short run-time leave the scenes addressing said relevant subject matter looking anaemic, and the Baz Luhrmann-esque grandeur of the staging of these conflicts seems bloated. Maybe Barnum could have seen the comedy in these errors and featured the bloated and the anaemic as special attractions in one of his shows.

Speaking of Barnum, even though the film rarely explores the many shades of his character which include being a hustler, a promoter, a politician, an author and a true innovator of the performing arts, it places him front and centre only as a consummate showman. Having Hugh Jackman play the lead character helps the movie in spades as he embodies the showmanship to a degree he previously reserved only for Les Miserables and the Tony Awards. Jackman works as the focal point for the many sub-plots of the movie, and both grounds it in reality and adds a touch of the magical to the proceedings.

The other actors, however, either don't get the same amount of screen time or don't have the same level of acting calibre as Jackman to convincingly essay underwritten roles. Efron, Zendaya, Williams, Ferguson, Settle and others come off more as placeholders than full-fledged characters.

However, almost every single one of them is given a joyous musical number to compensate. The movements accompanying each of those songs is choreographed to near perfection so much so that they end up being the best part of the film by overshadowing the story itself in every turn. The lighting and effects, however, leave a lot to be desired as the green screen looks dodgier than Settle's bread.

The music itself chooses to not be as unique as the choreography coupling it, and can be easily viewed as a microcosm of the film itself. While safe, easy and likeable, it caters to brand-safe pop sensibilities, whereas a hint of originality could have made it a soundtrack to admire.

The Greatest Showman derives both its happy and poignant moments from a plethora of movies that came before it. It knows what worked before, and sticks to said tried, tested and tired formula. Like the Ringling Bros And Barnum & Bailey Circus, the film fails to innovate on formulaic storytelling and presentation. It does not adapt to changing times and hence feels like an effort that belongs to a bygone era.

That makes it entertaining but not essential viewing - and a kind of insult to the man it is trying to portray. While bringing the story of a man who prided himself on showing people something they'd never seen before, making his story essential viewing would have been the best tribute.
Share. Save. Connect.
Tweet
THE GREATEST SHOWMAN SNAPSHOT 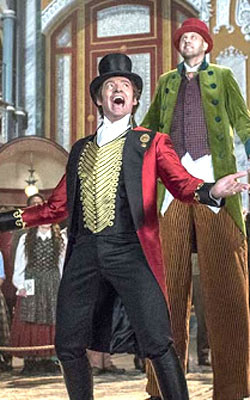 ADVERTISEMENT
This page was tagged for
The Greatest Showman english movie
The Greatest Showman reviews
release date
Hugh Jackman, Zac Efron
theatres list
Follow @fullhyderabad
Follow fullhyd.com on
About Hyderabad
The Hyderabad Community
Improve fullhyd.com
More
Our Other Local Guides
Our other sites
© Copyright 1999-2009 LRR Technologies (Hyderabad), Pvt Ltd. All rights reserved. fullhyd, fullhyderabad, Welcome To The Neighbourhood are trademarks of LRR Technologies (Hyderabad) Pvt Ltd. The textual, graphic, audio and audiovisual material in this site is protected by copyright law. You may not copy, distribute, or use this material except as necessary for your personal, non-commercial use. Any trademarks are the properties of their respective owners. More on Hyderabad, India. Jobs in Hyderabad.