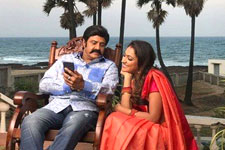 T J Reddy / fullhyd.com
EDITOR RATING
2.5
Performances
Script
Music/Soundtrack
Visuals
3.0
2.0
3.0
4.0
Suggestions
Can watch again
No
Good for kids
No
Good for dates
No
Wait for OTT
Yes
Ever since the day Nandamuri Balakrishna aka Balayya Babu made a train move backwards by his "thoda kottadam" (thigh slapping), two things happened.

One, he became a walking meme. Secondly, a goal of all his "mass" movies thereafter was to top that iconic moment by hook or crook. This quest has given us moments that include him jumping off a multi-storey building by using inflatable pillows to cushion his fall, controlling a bunch of attack dogs with a mere stare, and a plethora of gravity-defying dance moves, to name but a few.

But no matter how ludicrously joyous these moments were, they never managed to capture the sheer elation I felt when I set my eyes on the aforementioned scene involving the train. And so I walked into Jai Simha, Balayya's newest mass offering, hoping it would have a moment that would top said scene.

However, instead of being hilariously over-the-top, Jai Simha has a story that is both needlessly complicated and thread-bare. Narasimha (Balakrishna) is a coolie / driver / mason who comes pre-packaged with an excellent wig and a cute baby. Narasimha's solitary goal is to raise the child in a violence-free environment. But the spectre of commercial cinema won't let him do that - destruction follows him wherever he goes because the movie needs to be near three hours long.

In the first half, Narasimha defends a family, galvanizes a group of priests, indulges in unfunny and outdated sexual innuendo with the comic relief, romances the first of three heroines (played by Natasha Doshi who literally goes unnamed), lectures an ASP, and kicks so much ass that it almost tricks you into forgetting his vow of non-violence. Now does all this have anything to do with the primary plot? Absolutely not.

Why does it exists if it doesn't serve the film, you ask. Well, director K S Ravikumar and writer M Ratnam took your time and money, didn't they? Hopefully, they'll take your questions, too.

The main plot kicks in in the second half as we find Narasimha trying to protect Gowri (Nayantara) and her family (which includes a child who is identical to the one he raises) from a set of thugs led by Raji Reddy (Ashutosh Rana). So who is Gowri and why does Narasimha want to protect her? You've most probably guessed the answer, and you, sir/madam, win nothing of value in return.

This is but a solitary one of the many clichés flowing through this movie's veins. For this is a story that was constructed around one Balayya, two babies, three heroines, four duets and a bazillion fights instead of plot points or story beats.

All Balayya's other trademarks are here as well. Ravi Kumar assures the audience that they are indeed watching a Balakrishna vehicle - even if that vehicle ran out of fuel ages ago and now only runs on chest-thumping dialogues, the blood-curdling screams of bad guys and Balayya's pure mania. If there was a smidgen of common sense to be found in my viewing of the film, it belonged to the one guy who walked out of the cinema hall I was in after the first five minutes.

Balakrishna is on autopilot here and so is Ravi Kumar. The former toggles between smiling and speechifying while the latter runs through his filmography and recycles scenes that were past their use-by date a decade ago. However, Balayya's trademark conviction is palpable in every shot. He proudly says, "Nenu nee la chadukoley. Naaku inthe telusu." To that I retort: I did not read the script or know what made you star in this film, but all I know is that even your over-the-top performance can't save this train wreck.

If Balayya can't make this film enjoyable, the trio of females has a snowball's chance in hell of making it their own. The unnamed Natasha Doshi is so underwritten that she could be cut out of the film entirely and it wouldn't change much except the runtime. Haripriya's character Manga poses her own set of problems as the movie states that Narasimha raised her, but he ends up romancing her.

Post Simha Nayantara is the queen of flashbacks in every Balakrishna project, and the reasons for that are quite clear - her presence is regal and her acting is sublime. She carries scenes better than most in the business, and it is a damn shame that the scenes she ends up carrying reek of staleness.

As we all know, staleness also spreads at a lightning pace. Sure enough, what begins with affecting the character and the "plot" quickly engulfs the movie's audio-visual departments. Armed with poor surround mixing, songs that wore out their welcome in the '90s and sound effects that are reminiscent of Saridon ads of times past, the film makes for a very unpleasant experience.

Add to that some truly horrid editing and scene transitions, approved by a veteran director no less, and the movie isn't easy on the eyes either. Not to the left behind are its lighting and camera crew. The number of bright lights illuminating the background of shots set in broad daylight leave you with the question of whether the so-called poor folks Balayya is defending are wasting electricity or whether the aforementioned departments are terrible at their jobs. There is only one right answer.

Don't you think too hard to find that answer because the film does the job for you. Within the first ten minutes, Balayya displays his first bout of "power" by kicking five hooligans out of a crowded bus by means of a single kick. While everyone else on the bus is perplexed that this is a scene that is allowed to happen in 2017, an old man proudly claps in Balayya's general direction.

That moment is symbolic of where the filmmakers' sensibilities lay. Their ideas include having villains whose plans stagnate at crashing lorries into cars, drug addicts recovering in 12 hours, Balakrishna's character naming his son Balakrishna, and glorifying dance steps that involve nothing more than zipping and unzipping a jacket. This is a movie that belongs to a bygone era and fails to see the irony of its ways. This results in a final product that leaves many in the audience checking their phones during pivotal moments, and me lamenting the fact that Balayya's magnum opus train scene is yet to be topped.
Share. Save. Connect.
Tweet
JAI SIMHA SNAPSHOT 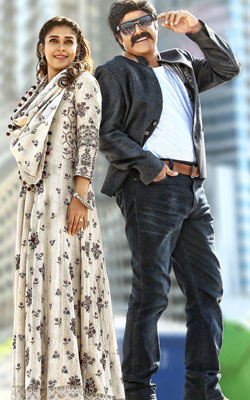 See Jai Simha full details
JAI SIMHA USER REVIEWS
1 - 2 OF 2 COMMENTS
POSITIVE  |  NEGATIVE |  NEWEST  |  OLDEST  |  MOST HELPFUL  |  LEAST HELPFUL
Subramanyam on 13th Jan 2018, 12:59pm | Permalink
Superrr hilarious review. Was disappointed U did not review Agyatavasi but made it up with this one ????????
TJ Reddy on 13th Jan 2018, 1:15pm | Permalink
I think my colleague Josh did a fantastic job with that one Subramanyam garu. Better than what I would have come up with, probably.
Josh on 15th Jan 2018, 10:07pm | Permalink
Been meaning to reply to you and Raghu, man. But I was under the mortal danger of having my cheek flesh bit off by my niece if I didn't spend Sankranti singing school rhymes with her. So, yeah.

Thanks for that comment. I was too embarrassed to say anything.

And have you watched Aruvi? I watched it today finally. Wept like a baby.
TJ Reddy on 15th Jan 2018, 10:39pm | Permalink
Caught it in theatres dude. Loved the first half and was iffy with the second. That electric pace and clever storytelling went out the window for some been-there-done-that setups. The acting and camerawork are stellar even if the score and songs are a bit too suggestive for my liking.

ADVERTISEMENT
This page was tagged for
jai simha full movie online
jai simha full movie.com
jaisimha full movie com
Jai Simha telugu movie
Jai Simha reviews
Follow @fullhyderabad
Follow fullhyd.com on
About Hyderabad
The Hyderabad Community
Improve fullhyd.com
More
Our Other Local Guides
Our other sites
© Copyright 1999-2009 LRR Technologies (Hyderabad), Pvt Ltd. All rights reserved. fullhyd, fullhyderabad, Welcome To The Neighbourhood are trademarks of LRR Technologies (Hyderabad) Pvt Ltd. The textual, graphic, audio and audiovisual material in this site is protected by copyright law. You may not copy, distribute, or use this material except as necessary for your personal, non-commercial use. Any trademarks are the properties of their respective owners. More on Hyderabad, India. Jobs in Hyderabad.