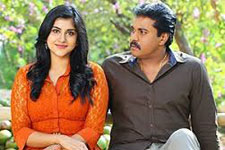 Josh / fullhyd.com
EDITOR RATING
2.5
Performances
Script
Music/Soundtrack
Visuals
5.0
2.0
5.0
6.0
Suggestions
Can watch again
No
Good for kids
No
Good for dates
No
Wait to rent it
Yes
A couple of months back, as a favour to an uncle, I walked into an agriculture expo in the Hitex exhibition grounds and surveyed the various exhibits on display. Among efficient drip irrigation technologies and pest-resistant hybrid crop varieties I came across something that truly excited my married soul - a vegetable chopper. A grid of metal blades over which you place an onion, and with a lever above it this man gave it one swift jab and voila! Chopped onion. No tears!

I was so excited that I quickly fished out four hundred rupees from my lean wallet and threw them at the guy before picking up one of those contraptions and making my way home to demonstrate it to my wife. So I take an onion, peel it, place it on the blade grid, and with the lever above it, one swift jab. The onion's gone in to a third of its length. So I gave it another jab. Nope, still there. And then one solid jab. The onion's chopped, yes, but voila, the chopper's broken, too.

And there's green plastic bits in the chopped onion. So we had to throw the onion away, too.

See, that's what happens when you buy a great idea but forget to buy decent execution. Watching 2 Countries is a roughly similar ordeal. What's great about it is it's a remake of a Malayalam hit and that usually means a sturdy plot where the characters have traits and motives, the plot has activity and yarn, and they even serve up a twist or two. That's great, particularly since we don't generally see these things in Telugu films.

This Sunil-starrer has him play a lout called Ullas from Venkatapuram who doesn't hesitate to jeopardize the lives of his own family members and close friends if it'll fetch him some money. By means of his cunning and moral decrepitude he gets married to wealthy NRI Laya (Manisha Raj). Turns out Laya is an alcoholic who's throwing her life away, and the rest of the story is how the immoral and the inebriated help each other kick their habits.

You know you really want to watch Sunil in these roles. Dude's a bucket of talent when it comes to portraying traits and emotions. And the newcomer Manisha Raj is a very good-looking woman who also seems to have an idea of what expressions different emotions evoke. And you have Pruthvi, Srinivas Reddy, Naresh, Jhansi, Ashwini, Chandramohan, Krishna Bhagawan, Raja Ravindra and the like. These people, if we know anything about the supporting cast in Telugu films, are capable of making you care for even the most wooden starkid.

But, this film is broken. It just doesn't cut it. It's so incoherently directed, and so badly put together, that you'll sooner suspect your sanity than suspend your disbelief. The jokes are about as forced as Kulbhushan Jadhav's conversation with his mother. The scenes come crashing like that three-storey building in Guntur (which I understand has been shared on every Telugu family Whatsapp group there is). And the net effect of this is the movie becomes like a flimsy vegetable chopper which has taken three unkind jabs. Yup, this stuff is broken.

And we also have to talk about the green plastic in the chopped onions. We mean the casual racism and sexism that's sprinkled throughout the movie.

Our film here has practically no qualms with the guy being a morally indefensible con artist who routinely harasses people including one stretch where he promises to marry a wheelchair-bound girl and promptly dumps her when he gets a wealthy NRI sambandham. All of this takes place like it's all fun and games. But when the girl takes a swig of alcohol, the guy's lamenting that his life has gotten ruined. Yes, that's how your life is ruined. Because your wife drinks.

And one of the big jokes of the film is Prudhvi being married to a big black woman. And has black kids with her. I thought I should be laughing. At myself.

At Amba in Mehdipatnam, I sat in the hundred rupee ticket section which was kinda empty on a first day first show, but when I stood up for the national anthem I saw the 70 rupee block closer to the screen was full of people, and they even hooted and clapped at the end of the national anthem. That means one thing. Sunil still has a draw. If only he could live up to that.
Share. Save. Connect.
Tweet
2 COUNTRIES SNAPSHOT 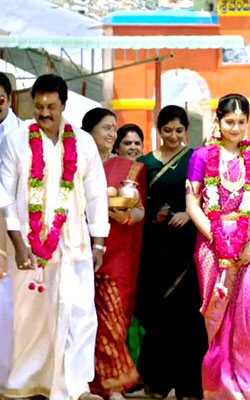 ADVERTISEMENT
This page was tagged for
2 Countries telugu movie
2 Countries reviews
release date
Sunil, Manisha Raj
theatres list
Follow @fullhyderabad
Follow fullhyd.com on
About Hyderabad
The Hyderabad Community
Improve fullhyd.com
More
Our Other Local Guides
Our other sites
© Copyright 1999-2009 LRR Technologies (Hyderabad), Pvt Ltd. All rights reserved. fullhyd, fullhyderabad, Welcome To The Neighbourhood are trademarks of LRR Technologies (Hyderabad) Pvt Ltd. The textual, graphic, audio and audiovisual material in this site is protected by copyright law. You may not copy, distribute, or use this material except as necessary for your personal, non-commercial use. Any trademarks are the properties of their respective owners. More on Hyderabad, India. Jobs in Hyderabad.