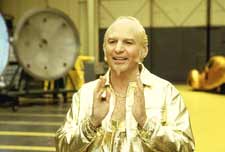 The opening scene is fall-over hilarious, but there is precious little else. The remainder of the movie has the occasional amusing sight gag or bright line when you might actually find yourself starting not to hate it. Unfortunately, at such times, another attack of potty humor invariably intervenes to arouse a renewed sense of disgust. The movie always seems to return to its rubbishy roots. 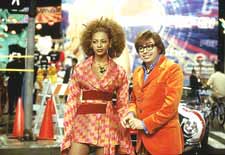 The plot has Austin going head-to-head with Dr. Evil again - only, this time Evil has drafted in yet more evil supporting characters to freshen the palette. The most important is the eponymous Goldmember, a 1970s Dutch night club owner obsessed with gold and with a penchant for peeling off flakes of his dry skin and eating them. Yes. And Austin teams up with former flame Foxxy Cleopatra (Beyoncé Knowles) to rescue his father (Caine) who has been kidnapped by the Dutchman, and to save the world yet again.

Anyway, you could forgive the aimless plot as being unnecessary in a comedy like this. But you couldn't possibly forgive Myers' (and co-writer Michael McCullers') insistence on rehashing old gags again and again. When the writers aren't repeating old jokes, they're repeating new ones. The explanation of Goldmember's nickname is stated several times throughout the film's first half by different characters, even though it's the exact same joke. Most of the humor revolves around sexual innuendo and inappropriate behavior, poking a finger in the eye of contemporary taste in the name of a retro vibe which works well in small doses.

Michael Caine, as Austin's randy spy father, steals the show with a sly attitude and some clever dialogue. There's a pretty funny running gag in which Fred Savage has a large mole on his face. That's about all the needles of fun you can find in this otherwise yucky haystack.

Knowles reportedly did a lot of research for the part of Foxxy Cleopatra - watching blaxploitation movies and studying Foxxy's inspiration Pam Grier - all so she could utter a few lines like "You're under arrest, sugar!" or "Shazam!" She does all right with what she is given, and she is less vacuous than Heather Graham was in The Spy Who Shagged Me, but we could do with a little more intelligence in the female lead. 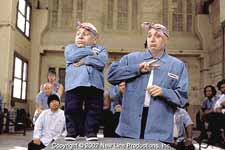 Fans will enjoy the movie because it is very much more of the same. Non-fans will not be converted because it is all very much more of the same. (One bonus star for showing Britney Spears' head exploding - all right, so it's just a movie, but I can dream, can't I?) Even though any gold in this edition of the franchise is mostly of the fools' variety, "Austin Powers In Goldmember" is one of those critic-proof sequels that will doubtless entice large numbers of fans into the theatres whatever the reviews might advise. Its wrap-up, incidentally, ensures that if - as seems likely - a fourth installment is planned, it will have to take a somewhat different tack than the first three. That, at least, is a blessing.
Share. Save. Connect.
Tweet
AUSTIN POWERS IN GOLDMEMBER SNAPSHOT
See Austin Powers in Goldmember full details
AUSTIN POWERS IN GOLDMEMBER USER REVIEWS
1 - 1 OF 1 COMMENTS
POSITIVE  |  NEGATIVE  |  NEWEST  |  OLDEST  |  MOST HELPFUL  |  LEAST HELPFUL
USER RATING
4.6
3 USERS
Performances
Script
Music/Soundtrack
Visuals
NA
NA
NA
NA
Can watch again - NA
Good for kids - NA
Good for dates - NA
Wait for OTT - NA
Witch on 19th Nov 2002, 3:02pm | Permalink
bad review. stop taking yourself so seriously avinash. the movie was a gross out comedy and a very good one at that. you have to cut the guys some slack - they did make an extremly funny, stupid movie. thats a feat in itself.
RATING
2
LEAVE A COMMENT
fullhyd.com has 700,000+ monthly visits. Tell Hyderabad what you feel about Austin Powers in Goldmember!
MORE MOVIES
Latest Reviews
Macherla Niyojakavargam
Laal Singh Chaddha
Raksha Bandhan
Sita Ramam
DC League Of Super-Pets
more
Bimbisara
Bullet Train
Ramarao On Duty
The Legend
Shamshera
Thank You (Telugu)
Gargi
My Dear Bootham
Shabaash Mithu
HIT: The First Case
Contemporary Reviews
Baava Nachchaadu
Moksha
Unfaithful Wife
Ayodhya Ramayya
The Mummy (Hindi)
more
Jaabili
Ammaaye Navvithe
Demon House
Ehsaas
Grama Devatha
Tirumala Tirupati Venkatesa
Nireekshana
Vadh
Chandini Bar
Random Reviews
American Bond 009 (Black Cat...
Kyun! Ho Gaya Naa
Stealth (Hindi)
Body of Evidence
Cheeni Kum
more
Changeling
Gullu Dada Returns
A Strange Love Story
Chhota Bheem And The Curse O...
After Earth (Telugu)
Bhoothnath Returns
Rey
Tutak Tutak Tutiya
The Post
Pailwaan (Tamil)
SEARCH MOVIES
Dissatisfied with the results? Report a problem or error, or add a listing.
ADVERTISEMENT
SHOUTBOX!
{{todo.name}}
{{todo.date}}
[
ip{{todo.ip}}
]
{{ todo.summary }}... expand »
{{ todo.text }} « collapse
First  |  Prev  |   1   2  3  {{current_page-1}}  {{current_page}}  {{current_page+1}}  {{last_page-2}}  {{last_page-1}}  {{last_page}}   |  Next  |  Last
{{todos[0].name}}

ADVERTISEMENT
This page was tagged for
Austin Powers in Goldmember english movie
Austin Powers in Goldmember reviews
release date
Mike Myers, Beyonce Knowles
theatres list
Follow @fullhyderabad
Follow fullhyd.com on
About Hyderabad
The Hyderabad Community
Improve fullhyd.com
More
Our Other Local Guides
Our other sites
© Copyright 1999-2009 LRR Technologies (Hyderabad), Pvt Ltd. All rights reserved. fullhyd, fullhyderabad, Welcome To The Neighbourhood are trademarks of LRR Technologies (Hyderabad) Pvt Ltd. The textual, graphic, audio and audiovisual material in this site is protected by copyright law. You may not copy, distribute, or use this material except as necessary for your personal, non-commercial use. Any trademarks are the properties of their respective owners. More on Hyderabad, India. Jobs in Hyderabad.