Kritika Deval / fullhyd.com
EDITOR RATING
3.0
Performances
Script
Music/Soundtrack
Visuals
4.0
1.0
3.0
4.0
Suggestions
Can watch again
No
Good for kids
No
Good for dates
No
Wait for OTT
No
Rock (Sai Dharam Tej) is a "happy-go-lucky" "flirt" (read: a menace to anything female in the vicinity, even gadis and portes) who lives and studies and serially harasses women in Jamaica. We will give you a minute to guess the name of the college, and the prize is that you will have to live with that piece of knowledge. Yes, the makers did, indeed, decide to call it Bob Marley School Of Music.

So, you have an Indian who grew up in Jamaica and goes to Bob Marley college, has friends who all speak Telugu and want to "bang chicks" as much as he does, which is to a predatory extent. This is what a whole bunch of Tollywood's most influential people came up with for the debut of someone in their family. You know, Pilla Nuvvu Leni Jeevitham wasn't a perfect film by any means. But it had one thing going for it. It was not Rey.

Get this. Jenna (Shraddha Das) is a two-time winner of a world-wide dancing competition, a Mexican, and has a mob behind her to do her bidding. She regularly gets contenders killed, and has at one point in the film, stood on a terrace and shouted out loud, "I AM THE QUEEN OF AMERICA!". It's like whoever wrote this pulls their stereotypes out of the stereotypical primordial ooze. What is this combination of characteristics even supposed to mean? The mind boggles, dear readers. It truly does.

En fin, you have the heroine Amritha (Saiyami Kher) who joins Bob Marley (*giggles*) College with wide-eyed dreams of beating Jenna, and falls rabidly into hate with Rock, which is the only series of events in the film that this writer gets. Because, let's be honest here - Rock is a repulsive person who says repulsive things in the name of being a "manly man". Anyway, Amritha soon realizes that Jenna is a psychopath who takes the competition way too seriously, and decides to take the help of Rock. We'd like to assume that this was a case of her strategizing that the best way to fight fire is with fire.

Anyway, pretty soon they are in a dance battle to death. And also they have dance-based super powers.

This movie, with its membranous plot, is stretched out to nearly 3 hours, each instance of which period is intent on hurting your brain. And then, there are the stereotypes. You know, Indians do not have any right to complain about negative representations in foreign films, when our filmmakers regularly boil down the portrayals of all kinds of foreigners to the LCDs of their stereotypes. In their own countries. That takes a level of xenophobic myopia that is astonishing.

There isn't much in the way of a story. The dances are neatly choreographed and performed, but the music is inane. The production values are polished, but are retardedly over-the-top. Jenna from America has an actual throne. Rock sets fire to a hill while dancing up it.

The performances by both Sai Dharam Tej and Saiyami Kher are of their Pinocchio versions. They seem to have forgotten that emotion is something you can do with your face. Shraddha Das and Ali have a bit of fun with their roles.

In all, this writer will not be surprised if it turns out that the delay in the release of Rey was intentional - otherwise Sai Dharam Tej would still be shouting at success.
Share. Save. Connect.
Tweet
REY SNAPSHOT 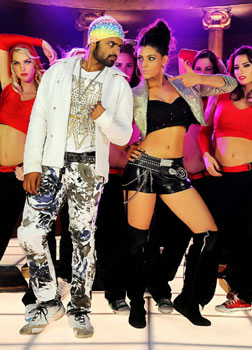 See Rey full details
TOP COMMENT
The Common Movie Goer on 28th Mar 2015, 5:55pm | Permalink
I agree with jillel khan. This is hands down *the* funniest review I have read in a very, very long time. Every line of the review was either witty or hilarious. Kritika Deval is normally excellent, but she definitely outdid herself this time. It takes guts to watch these kind of movies where you know you will end up having a bad time. For this, I salute the entire team of FH reviewers who do it week after week without financial incentives (read briefcases from the production house). You are the team we might not deserve, but definitely need.
8
0
REY USER REVIEWS
1 - 5 OF 5 COMMENTS
POSITIVE  |  NEGATIVE |  NEWEST  |  OLDEST  |  MOST HELPFUL  |  LEAST HELPFUL
aleel anhsirk on 28th Mar 2015, 9:22pm | Permalink
Saleem's reveiw was way better.But then again it did have such an amazing source material to capitalize on.
venkoba on 28th Mar 2015, 9:46pm | Permalink
Okka mogadu review was awesome too
Hari on 28th Mar 2015, 8:07pm | Permalink
"Bob Marley School of Music" ROFL

YVS should be banned from making movies

ADVERTISEMENT
This page was tagged for
rey full telugu movie download
Rey telugu movie
Rey reviews
release date
Sai Dharma Tej, Saiyami Kher
Follow @fullhyderabad
Follow fullhyd.com on
About Hyderabad
The Hyderabad Community
Improve fullhyd.com
More
Our Other Local Guides
Our other sites
© Copyright 1999-2009 LRR Technologies (Hyderabad), Pvt Ltd. All rights reserved. fullhyd, fullhyderabad, Welcome To The Neighbourhood are trademarks of LRR Technologies (Hyderabad) Pvt Ltd. The textual, graphic, audio and audiovisual material in this site is protected by copyright law. You may not copy, distribute, or use this material except as necessary for your personal, non-commercial use. Any trademarks are the properties of their respective owners. More on Hyderabad, India. Jobs in Hyderabad.