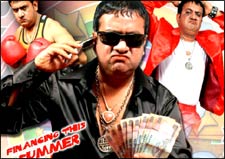 Deepa Garimella / fullhyd.com
EDITOR RATING
5.0
Performances
Script
Music/Soundtrack
Visuals
6.5
5.0
5.0
4.0
Suggestions
Can watch again
No
Good for kids
No
Good for dates
Yes
Wait for OTT
Yes
Home-spun lemonade has an undeniable edge in a cola-infested market, and all the business development it requires is to simply exist - in large quantities, at that. However, if lemonade is what your entire product line spans, then fiddling around with that slice of lemon is about the only innovation you can hammer into your offering.

The Angrez and all its spin-offs, then, are mostly about a brand that just needs to keep making an appearance every year. It smacks of wasted potential - the team has a proven ability to tickle its audiences endlessly, but the target audience is still limited and there's a whole city out there that'd benefit from a product upgrade.

Gullu Dada Returns is another of those no-frills comedies imbibed with the Hyderabadi flavour, whose key source of humour is the local dialect. It revolves round a young resourceful man Aziz (Aziz Naser), who wants to have a lavish wedding reception but doesn't have enough money in his kitty.

His friends are too broke to lend him any money, so despite being the right-side-of-the-law kind of person, he is forced to borrow from the loan shark Gullu Dada (Adnan Sajid) - fully meaning to pay him back. Now Gullu Dada is a source of much terror for his borrowers. The rest of the story deals with Aziz's repayment blues.

Gullu Dada's antics - his attempts at romance, his extortion rounds, and his being outwitted by Aziz - are what lend this film the humour tag. Surprisingly, there's much less comedy in this one than you'd expect. Maybe because it's not too noisy - there is thankfully very little physical humour, no crude jokes, and a fair bit of situational and dialogue-oriented comedy.

However, how much you enjoy this flick depends on how much you live and love the Hyderabadi accent. The net result, for several, is a brief collection of mildly funny moments.

There's visible effort in weaving out an actual story instead, and make things more conventionally filmi - imagine a half-hour-long depiction of a traditional Muslim wedding, right from the engagement to the Walima.

Adnan Sajid dominating the script does well for the flick, since he puts in an energetic show. Aziz Naser has a mix of scenes that'll make him look good as an actor - including a heavy-duty emotional one. The rest of the cast is amateurish, however, especially the women. The real focus here is on the accent, though - needless to say, everyone gets that right.

The dull cinematography and the technical values keep the flick out of the reach of any new patrons - it's ultimately only those who've watched the crew's earlier work who'll end up watching it. The wedding sequence consists of interesting dholka he geet but otherwise, the soundtrack has a number of '80s-'90s film songs accompanying the comedy on display.

In sum, Gullu Dada Returns is decent and light-hearted enough to cool off, but if you're unaccustomed to the franchise, there's not much you're missing.
Share. Save. Connect.
Tweet
GULLU DADA RETURNS SNAPSHOT

See Gullu Dada Returns full details
GULLU DADA RETURNS USER REVIEWS
1 - 2 OF 2 COMMENTS
POSITIVE  |  NEGATIVE |  NEWEST  |  OLDEST  |  MOST HELPFUL  |  LEAST HELPFUL
USER RATING
9.0
1 USER
Performances
Script
Music/Soundtrack
Visuals
NA
NA
NA
NA
Can watch again - NA
Good for kids - NA
Good for dates - NA
Wait for OTT - NA
tabs on 5th Sep 2010, 12:25am | Permalink
i own movie ; just bought it mid-july from hyderabad international airport; and me and my family have watch this movie atleast once a day; even the kids love the movie; awaiting for more of such decent movies; this is the BEST from the lot since the release of the angrez;
afraz on 4th May 2010, 2:15am | Permalink
gullu dada rocks

ADVERTISEMENT
This page was tagged for
audio Dada Return movie
gullu dada full movie in hindi free download
gullu dada return full movie dowamload
Gullu Dada Returns download
gullu Dada downloading movie
Follow @fullhyderabad
Follow fullhyd.com on
About Hyderabad
The Hyderabad Community
Improve fullhyd.com
More
Our Other Local Guides
Our other sites
© Copyright 1999-2009 LRR Technologies (Hyderabad), Pvt Ltd. All rights reserved. fullhyd, fullhyderabad, Welcome To The Neighbourhood are trademarks of LRR Technologies (Hyderabad) Pvt Ltd. The textual, graphic, audio and audiovisual material in this site is protected by copyright law. You may not copy, distribute, or use this material except as necessary for your personal, non-commercial use. Any trademarks are the properties of their respective owners. More on Hyderabad, India. Jobs in Hyderabad.